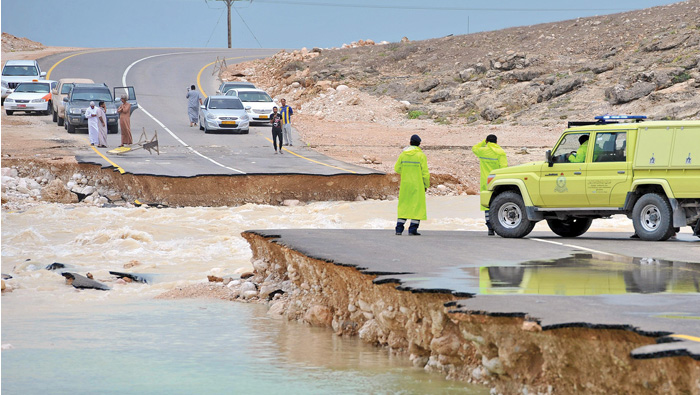 Follow Times of Oman live coverage of Tropical Storm Luban here
Muscat: The tropical situation, Luban, passed the Sultanate without recording injuries, deaths or significant material damage.
Luban has been downgraded from a storm to a deep depression, the Public Authority for Civil Aviation announced. The Authority’s data also revealed that isolated rain is likely to continue in Dhofar until Monday.
**media[947645]**
Salim Al Shanfari, Director General of Salalah Municipality, said: “The weather condition in the wilayat of Salalah is stable and normal with isolated rain and there is no physical loss or death, with the flow of six wadis and heavy rains concentrated in the eastern and western areas of the governorate.”
According to the latest storm update, the centre of the storm passed through the coast of Yemen. As a result, it continued to affect Dhofar on Sunday, with heavy rains and occasional thundershowers, which may lead to floods, with fresh winds of 20-25 knots. The sea will continue to be rough with a maximum wave height of 3-5 metres.
Because of the wadis’ floods, a number of roads in Dhofar have been cut off after heavy rains from Luban hit the governorate. The National Committee for Civil Defence (NCCD) has warned drivers to exercise caution.
Eng. Said Tabouk, Director General of Roads and Land Transport in Dhofar, said, “The main road leading to the western areas of the governorate is cut off and the equipment and machinery are on site waiting for the wadis to stop flowing or for a decrease in the water level, in order to start the repairs of the road and re-open it for traffic.”
**media[947648]**
“For internal roads in the western region, such as Rakhyut and Dhalkut, most of them are passable but may be affected with heavy rainfall during the next few hours,” Tabouk added.
The Salalah - Thumrait Road, which leads to the Governorate of Muscat, is open. Tabouk said: “The rest of the roads in the governorate are accessible to traffic, with falling stones in some locations but not obstructing traffic. In addition, most locations expected to be affected by the tropical situation have been equipped with necessary equipment to prepare for a quick impact.”
Wilayat Dhalkut recorded the highest amount of rainfall in Dhofar with 89mm of rain in the past 24 hours, Oman Meteorology announced.
Sheikh Musalim Al Shanfari, Wali of the wilayat of Dhalkut, said: “Very heavy rain lashed the province accompanied by active winds, and electricity was cut off in two complexes because of the wind. We waited for the rain and wind to subside to reconnect electricity, but the main cities in the province were not affected. We hope the weather will be stable in the next few hours.”
Due to predicted heavy rains accompanied by high winds and wadis overflowing in Dhofar, citizens and residents have been warned against crossing wadis and have been asked to avoid low lying areas. “The citizen and residents are safe in their homes and some of them have been evacuated to shelters. All precautions and equipment have been made available in the western areas such as food and generators and equipment for road rehabilitation,” the Wali of Dhalkut confirmed.
The Salalah port also received its first vessel at the container terminal, the port management announced, three days after suspending operations ahead of tropical storm Luban. In a statement, the Port of Salalah said, “We have started work gradually at the container terminal by receiving the first vessel this afternoon.”