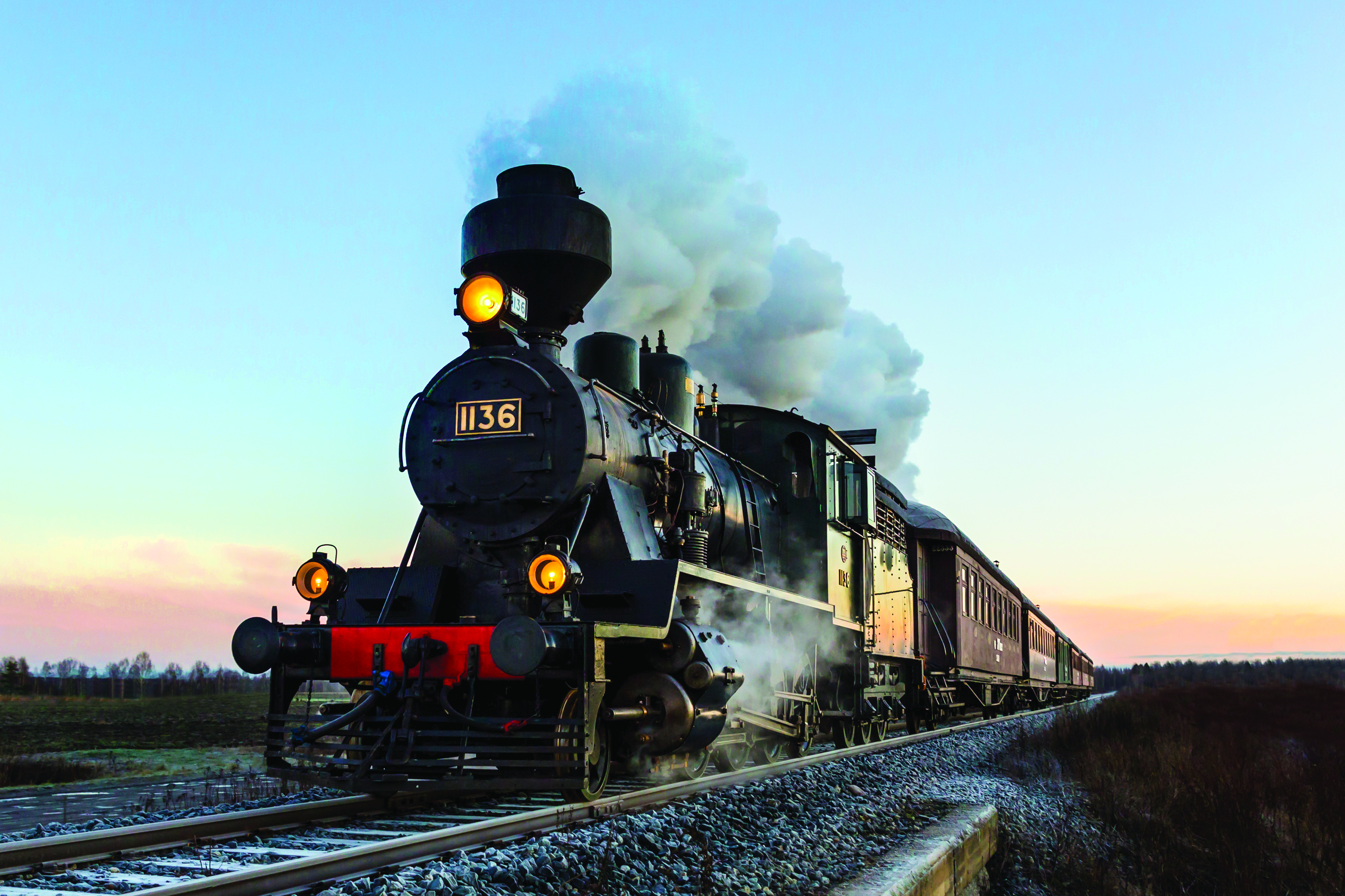 The steam engine
In 1804, Richard Trevithick built a steam locomotive that ran on rails. It was a tramway, or road locomotive. In 1825, George Stephenson invented the first steam locomotive engine for railroads. Early trains travelled at 6mph (9.6kph), but by the beginning of the 20th century, some could reach 100mph (161 kph).

Safety concerns
The early trains were not particularly safe. Boilers could explode if the pressure was not correctly maintained, and collisions were a danger. Today, the most common train accidents involve automobiles trying to race across the railroad tracks as a train is approaching.

The end of steam
Diesel and electric locomotives began to replace steam engines at the turn of the 20th century. The use of steam locomotives was rare after 1950. Passenger trains that make a lot of stops are sometimes called a “milk run”. The caboose is a car at the end of a train. Early cabooses had sleeping bunks and a cooking stove. Railroaders have many nicknames for the caboose — crib, cage, crumb box or the crummy.

North America
In 1815, John Stevens wanted to build a railroad across the state of New Jersey, but was unable to get funding for the project. Ten years later, he built a circular track in Hoboken and ran a small steam-powered car on it.The early 1800s was a time of great expansion for railroads. By 1850, more than 9,022 miles of track had been laid in the United States. The Central Pacific Railroad began laying track eastward from California in 1863, and the Union Pacific began laying track westward in 1865. The two lines met in Utah in 1869. Canada’s first transcontinental railway was completed by the Canadian Pacific Railroad in 1885. These railroads opened the remote lands of the West to settlers and trade.

Bullet trains
Japan is home to the first high-speed passenger rail line. Known in the West as the bullet train, the Shinkansen is a high-speed intercity train that opened in 1964. The line moves commuters between Tokyo and Shin-Osaka and remains one of the most heavily used high-speed routes in the world. In the 1960s, its trains reached a top speed of 130mph (210kph) and travelled 320 miles (515km) in about 3 hours and 10 minutes. Trains on this line today travel at speeds of up to 170mph (273.5kph) and take 2 hours and 25 minutes. The success of Japan’s bullet trains led to further research and development in Europe over the next two decades, and improvements were made to many existing passenger services. Today, the term “high-speed rail” generally refers to speeds of 160mph (250kph) or above on new track. In the United States, the California High-Speed Rail network was approved by voters in 2008 and should be completed by 2029.

Moving forward
Because railroads are very economical and environmentally friendly, they should continue to play an important role in the transportation of goods and people.