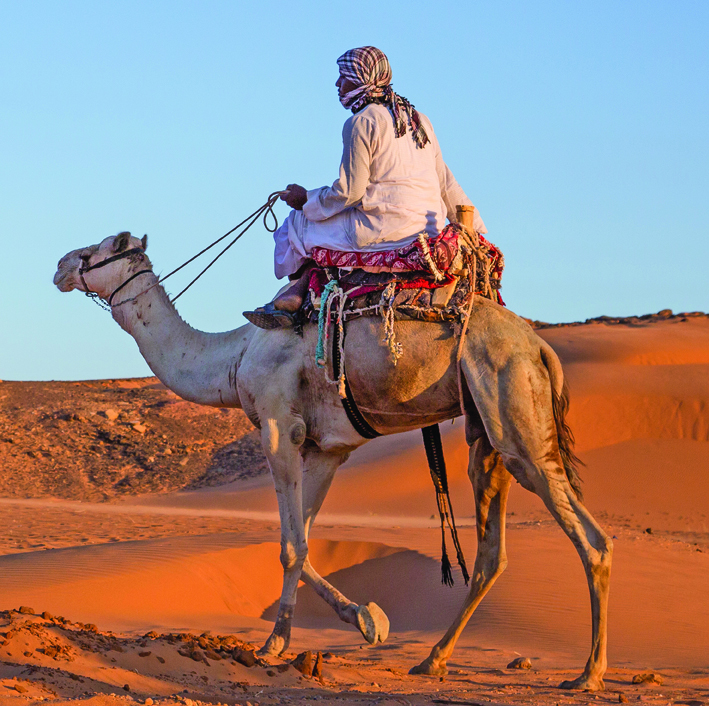 My name is Ali. I am 10 years old. Today is a very special day for me. My father is coming home. He left with my elder brother and uncle six months ago with a camel caravan. Hundreds of men from my village and the ones surrounding it travel together with dozens of camels to faraway places every spring to sell cinnamon, cardamom, and other spices we grow in our villages. He’s promised me something very special when he returns, because today is my birthday.
People at school make fun of me sometimes because my father is a camel trader. They don’t know that he is a very successful trader, and is following in the footsteps of our ancestors, who’d been traversing the deserts on their faithful beasts of burden from centuries ago.

“Abu, you’re home.” It helps that my father’s name is Abu. Makes it easier to remember, you know.
My father has come back from a three-month long journey, and has brought back plenty that is worth its weight in gold. He may be sore from the ride, and exhausted from his time away from home, but his eyes light up in glee when he sees me galumphing towards him.

I may only reach his navel, but as I break away from his hug, he presses a small copper coin in my palm. I look at him quizzically, and he enjoys seeing the look of bewilderment on my face. The coin bears inscriptions in Arabic on one side, and an imprint of a Moorish sabre on the other. I’ve never seen coins like this, and the rough edges mean it’s at least five hundred years old. I hold it up against the light, and I have to squint as it bounces off the recently polished surface.
“This coin belonged to your ancestor, who fought alongside the great Saladin during the Crusades,” my father told me. “The year was 1187, and our ancestor, Khalid, was commander of Saladin’s cavalry. Soldiers from England, France, and Germany had travelled all the way from Europe to capture Jerusalem, and it was Khalid’s job to ensure that didn’t happen.”

My eyes were now as big as saucers: It may be late afternoon, but this discovery of our lineage has made me forget all about lunch. “You see, the Crusaders had taken the city about a hundred years ago, and Saladin wanted it back because it’s been part of our history since the beginning of time. Mounted crossbowmen were firing relentlessly at our cavalry, but in Khalid’s men, they’d gotten more than they’d bargained for. “You see, son, Khalid’s men rode camels, and they proved decisive in victory,” my father said to my astonished face. “Nature has blessed the camel with footpads that allow it to gallop even in the sand. The European horses were no match for Khalid’s camelry, and as the sun set on that day, Saladin’s forces galloped to victory against the Crusader armies.”

“Wow,” was all I could say, as I absentmindedly scrabbled at a hand tugging my left shoulder. The shadows were lengthening as afternoon transitioned into early evening; my mum, Khadija, had been largely unsuccessfully trying to get Abu and I to have lunch. My great-grandfather Ahmed was already contentedly making his way through a rich, piquantly spiced bowl of lentil soup. A platter of vine leaves lay in the centre of the table, along with a succulent-looking roast goat, and a tangy tabbouleh.

“Your dad’s been telling you about the camels, has he?” he asked me, with the smile a parent can only give to the youngest in the family. I nodded in the affirmative. “Has he told you about my father, though?” He ventured, one playful eyebrow raised quizzically, as I fumbled for a chair, my eyes now firmly fixed on his wizened face, which was glowing with enthusiasm.

“The Crusades weren’t the only war our family fought in the desert. You see, Ali, Khalid and his descendants had formed a strong bond with the camel, and wanted to make it stronger. But they’d had enough of war,” he revealed.
“Our ancestors were great traders,” said my great-grandfather. “They would cross the Sahara into Africa, batting the heat and stinging sandstorms, travel to Persia as they watered their beasts of burden in many of the canals that crisscrossed that empire, and even went as far as China, trading incense and spices for bolts of silk once they’d traversed the Gobi Desert on their faithful mounts. “In 1916, though, midway through the World War I, my father had to take up arms once again,” he said, with an almost conspiratorial whisper.

“The Turks were invading from the north and the British formed the Imperial Camel Corps. I was only an infant back then, but every household was required to contribute soldiers to the war. “My father Abdel’s knowledge of the desert was invaluable to the British. With his rifle in one hand and sabre in the other, he would lead mounted columns of intrepid fighters out into the desert, late in the night, on patrol,” he went on, his soup now lying cold on the side as my mother tutted in exasperation.

“When soldiers got lost in the desert, the generals would always turn to Captain Abdel and his camel cavalry. When it was time for a scouting mission, my father was always the first to volunteer. You see, my son, the camel has brought our family great honour, and that is why we revere it so.

“To us, it is not just an animal,” said my father, my knowledge about our immense family history now burnished for the better. “To us, the camel is a way of life. Without this humble beast, we would not be who we are today. It has sustained us, nurtured us, and helped us grow for generations, and will do so for generations to come. And today, on your 10th birthday, it is time for you to take the next step in this historic tradition of ours.
“It is time for your very own camel.”
—[email protected]

Through the ages: Men and their camels

3000 BC: The camel is first domesticated in Somalia and Southern Arabia

2500 BC: The two-humped Bactrian camel is domesticated in Central Asia

1500 BC: The first camel saddle is invented

1200 BC: Camels begin to be used as pack animals

843 BC: First use of camels in warfare, at the Battle of Qarqar

547 BC: The Persians record a decisive victory at the Battle of Thymbra as their camel cavalry help turn the tide of the conflict against the Achaemenid Empire

480 BC: Camels prove decisive in the second Persian invasion of Greece

622 AD: Arab armies extensively use camels as they conquer large parts of Northern Africa, France, Spain, and all of the Middle East to form the Islamic Caliphate

1162 AD: Mongol leader Genghis Khan begins to use camels as both battle mounts and supply transports during his conquests

1187 AD: Saladin unites Arabia against the Crusader kingdoms during the Second Crusade, and camels prove to be decisive as they help take back the key cities of Jerusalem

1451 AD: The Ottoman Army forms a camel corps as part of its cavalry division

1912 AD: France creates a mehariste camel corps as part of its African Army, to provide greater mobility against Tuareg insurgents

1914 AD: The British create the Egyptian Camel Transport Corps to provide supplies to soldiers fighting in the deserts of the Middle East and Africa during the World War I

1916 AD: The British Imperial Camel Corps is formed to participate in active combat during the World War I

1931 AD: Jordan recruits a camel corps into its army. This corps is used to carry out border patrols even today