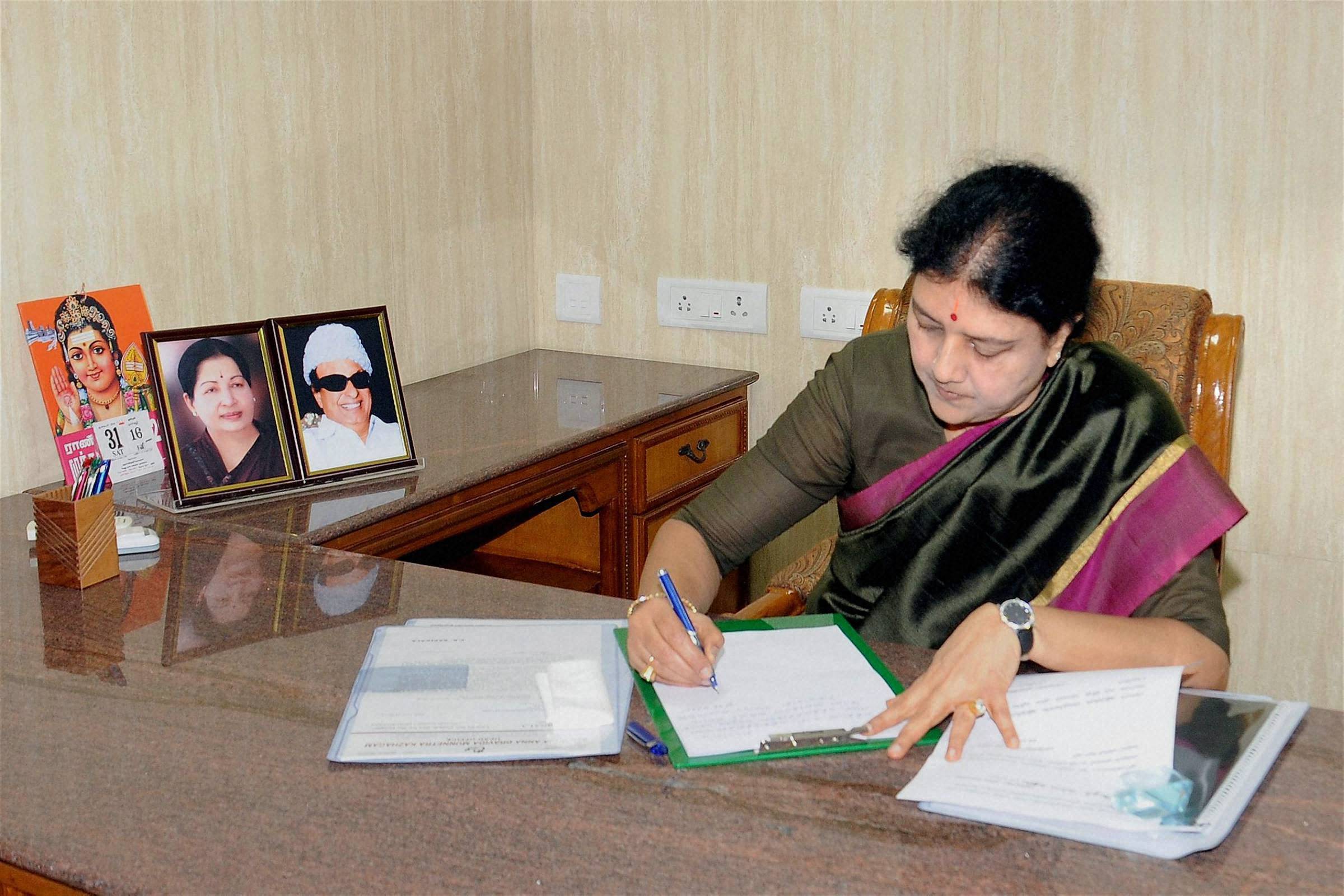 Chennai: Amid chants of 'Chinnamma Vazhagai', V. K. Sasikala on Saturday took charge as All India Anna Dravida Munnetra Kazhagam(AIADMK) general secretary, the top party post, and pledged to take forward the legacy of Jayalalithaa, saying her "political lessons" will be followed like Vedas.
Sixty-year-old Sasikala, also called 'Chinnamma' and who remained Jayalalithaa's shadow in public for nearly three decades and wielded considerable clout behind the scenes, also asserted that none other than party founder M. G. Ramachandran, Dravidian ideologue C. N. Annadurai and 'Amma' will be given prominence in the party.
"Amma is always in my heart," an emotionally charged Sasikala said after assuming charge, adding she had been with Jayalalithaa for party meetings for over 33 years and that the AIADMK will continue to rule Tamil Nadu for many years. The close aide of late Jayalalithaa first garlanded the statue of party founder M. G. Ramachandran at the AIADMK headquarters here after she arrived amid tight security.
She then proceeded to pay floral tributes to the portrait of Jayalalithaa. Sasikala formally assumed charge by signing papers after which she proceeded to address the gathering outside. En route to the party office, she was given a rousing welcome by party leaders, functionaries and cadres who had gathered in large numbers. Party activists had lined up on both sides of the road from the Poes Garden residence to the party headquarters at Royapettah to welcome her.
Sasikala, clad in a light green saree with a pink border, greeted them with folded hands. Party flags, banners and festoons sporting bright images of Jayalalithaa and Sasikala were put up on roads, all along from Poes garden to Royapettah. Banners and hoardings hailed Sasikala as 'Chinnamma' everywhere.
AIADMK presidium chairman E. Madusudanan, party treasurer and Chief Minister O. Panneerselvam, veteran party leader and Lok Sabha deputy speaker M. Thambidurai, received Sasikala and accompanied her to the party office.
In her first formal address to functionaries after formally taking charge as party chief here, she said the AIADMK will continue to be run in the same way as during the time of Amma when it was administered with a level of "discipline as seen in the Army".
It will continue to follow in the footsteps of these great leaders who looked beyond caste and religion, she said.
Her assertion comes against the backdrop of some murmur of protests against her taking over the post. Heaping encomiums on Jayalalithaa, she said, "let us follow like Vedas our Amma's political lessons and her footsteps," adding, "this movement (AIADMK) which was shaped up by Amma is a people's movement, this is people's government, our journey will be in the path laid by Amma."
She said the "yardstick" followed by Jayalalithaa for elevation of cadres in the party organisation will continue to be the same and "we will not deviate even an iota from it."
Hailing Jayalalithaa for her courage, she said the late leader had stormed the male bastion of politics that has given confidence to women. She said "no one can fill her (Jayalalithaa) vacuum even in another thousand years." "I carry Amma in my soul," she said adding "we have assembled here to guard the confidence of Amma that it will be the AIADMK which will rule the State even for 100 more years ...she was everything for me and for us all."