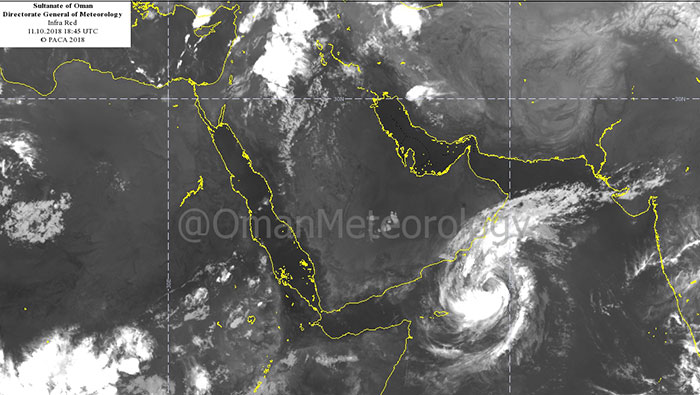 Muscat: Cyclone Luban's indirect effects have reached Dhofar and southern Al Wusta, but the storm's recorded windspeed has reduced marginally, the Public Authority for Civil Aviation said in its latest storm update.
In its report on Thursday night, PACA said, "Indirect effects of Luban continue over Dhofar and Al Wusta with scattered rainfall and fresh winds between 20-25 knots/37-46 kmph and a rise in sea level of 3-5 metres."
The statement added that Dhofar would start seeing the storm's direc effects on Saturday, October 13, with "heavy rain, running wadis, wind speeds of between 30-40 knots/56-74 kmph, and waves with a maximum height of 6-8 metres".
Meanwhile, southern Al Wusta is expected to be affected with medium to heavy rainfall and gusts between 20-25 knots/37-40 kmph, and waves with a maximum height of 6-8 metres, the report added.
PACA's statement said, "The latest weather maps and analysis of the National Centre for Multi-Hazard Early Warning indicate the concentration of the tropical cyclone Luban in the Arabian Sea. The wind speed around the centre is estimated to be around 64-70 knots/119-130 kmph. The cyclone is about 460 km away from Salalah."