If you miss next week’s solar eclipse over Oman, you won’t see it in this lifetime 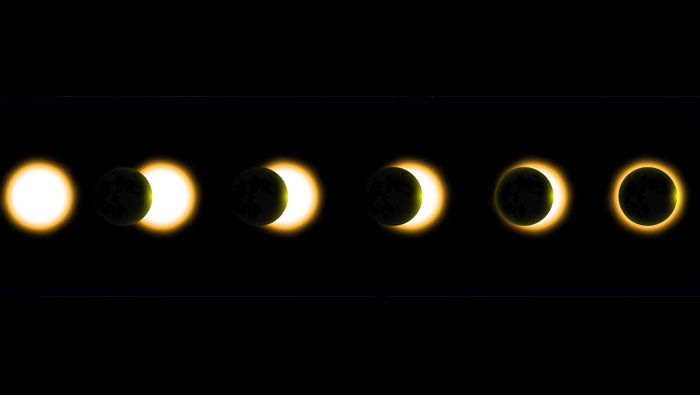 Muscat: The rare solar eclipse that will pass over Oman on December 26, will be seen next only after 83 years, which means that if you don’t see it now, you will probably not get to witness this in your lifetime.

Called an annular eclipse, this rare atmospheric phenomenon will only be visible over a handful of countries, with Oman being one of them. The others are Malaysia, India, Indonesia, Sri Lanka, Saudi Arabia, Bahrain, Qatar and the United Arab Emirates.

Oman’s Astronomical Society and the Ministry of Tourism are planning to organise a tourism event around this, and have set up plans for a camp which is located in Ras Al Ruways, an area from where people can enjoy one of the best views of the total solar eclipse while in the country.

Those who live near Al Ashkara, Fahud, Adam, and other neighbouring areas of the Dahkiliyah and Sharqiyah governorates will get to witness a total solar eclipse, while the rest of the country will only be able to witness a partial eclipse.

Speaking of the importance of organising such activities as tourism, Ali bin Amir Al-Shaibani, Vice-Chairman of the Board of the Oman Astronomical Society, said, “The Annular Solar Eclipse Project 2019 will contribute to achieving one of the goals of Vision 2040. The global tourism activities will be organised with high efficiency. It will focus on the name of the Sultanate of Oman prominently at local, regional and international platforms.

"It will help highlight the unique and diverse natural and tourism elements of the country which attract thousands of tourists from around the world, as well as citizens and residents during the event. It has a lot of economic benefits for the Sultanate of Oman and for particularly those who work in the area.”

“The residents of the Sultanate will watch the first annular eclipse in 118 years, where the last such eclipse had occurred in the year 1901. The phenomenon of the annular eclipse occurs when the earth, moon, and sun are almost in a straight line, and the moon is in the middle, but at the height of its orbit around the earth to show its disk smaller than the Sun’s disk. This is why we will see the Dark Moon disk cross the Sun’s disk,” Al-Shaibani said.

He also spoke about the calculations of the eclipse of the sun, “The eclipse will continue in the Sultanate for about two hours and 29 minutes. It will start before sunrise at 6:31 am. We should start observing it after sunrise at 6:45 and continue until 08:58. It will reach its peak at 07:39 in the morning according to Muscat time.

Al-Shaibani said that this type of eclipse would not be repeated in the Sultanate until the year 2103, after the annular eclipse of the Sultanate’s sky that will also be visible on June 21, 2020. These two events should be used for watching and photography. They will take place with a gap of just 6 months and would be witnessed by the residents of the Sultanate.

These two events are considered to be the rare natural phenomena. Everyone who will be able to watch them will definitely have a distinct experience. It is also an opportunity to highlight the Sultanate as one of the best sites to monitor this phenomenon as it is located on the path of crossing of the annular eclipsed the sun.

Al-Shaibani pointed out that the project was to make the Sultanate one of the best global destinations for watching annular eclipse in the years 2019 and 2020. It will help promote scientific tourism of the Sultanate, educate social groups about the solar eclipse and providing scientific materials for safe watching. Various groups of society will get the opportunity and facilities to monitor and photograph the eclipse.

Collective monitoring activities will be organised in various governorates of the Sultanate. Astronomical camps will be set up in a set of sites through which the annular eclipse will pass so that the viewer of the phenomenon has a distinct experience which combines awe, beauty and inspiration. It will encourage research, help set up science foundations to study solar eclipse and build generations of "amateur and specialised" astronomers in the Sultanate. It will enhance national skills in the field of observation.

“With the support of Oman’s tourism development company ‘Omran’, the Research Council, Oman LNG, Oman Broadband Company, Petroleum Development Oman, and Oman Data Park, the solar eclipse project has a number of programmes and events including promotional campaign of the Sultanate in partnership with the Ministry of Tourism.

An awareness campaign has also been launched for the safe watching of the solar eclipse phenomenon in cooperation with the Ministry of Health among various segments of the society. A number of educational programmes have also been formulated to spread the knowledge of astronomy. Under the programme schools’ students are being targeted with the help of the Ministry of Education. There would also be an astronomical photography exhibition 2020 in partnership with the Omani Society for Photography.

This is to encourage photographers to shoot the phenomenon of the solar eclipse and highlight the beauty of Oman, and support its research and scientific studies. Many activities will also be organised in cooperation with the Ministry of Awqaf and Religious Affairs. The association will organise mass monitoring activities in the various governorates of the Sultanate and the ring eclipse camp in Ras Al-Ruwais, where a number of astronomical telescopes equipped with solar filters will be available.

So as to provide the opportunity for all segments of society to watch the phenomenon the Oman Astronomical Society will also organise an event for those with hearing impairment, in association with the Omani Society for Persons with Hearing Disabilities. The society will announce sites for mass monitoring activities spread in various governorates of the Sultanate.

Anwar bin Said Al Baloushi, Acting Director of the Activities Department at the Ministry of Tourism, said that the annular eclipse phenomenon would be visible in the Sultanate on the December 26. It is a tourist attraction for visitors and tourists from inside and outside the Sultanate.

Al-Baloushi said that this phenomenon was part of the scientific tourism which the Ministry of Tourism encourages to get benefit from the natural, climatic and astronomical elements which are abundant in the Sultanate. The Ministry will also support social initiatives and prepare all avenues for the advancement of this type of tourism.