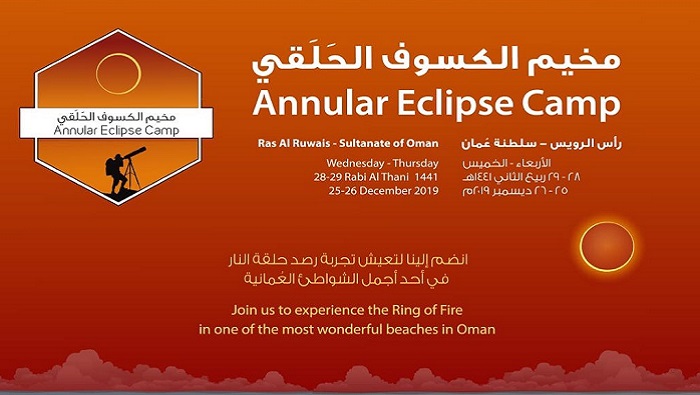 Muscat: The upcoming annular eclipse is expected to last for about 3 minutes in areas located along the transit path. In Oman, the eclipse of the sun will last for around 2 hours and 29 minutes.

However, the Ministry of Tourism is using the opportunity to promote scientific tourism in the Sultanate through the 2019 Eclipse Project, a program launched by the Omani Astronomical Association in cooperation with the Ministry of Awqaf and Religious Affairs, the Ministry of Education, the Ministry of Health, the General Authority for Radio and Television, the Omani Society for Photography, and a group of relevant governmental and private institutions.

The project aims to monitor and photograph the annular solar eclipse phenomenon that will occur on Thursday morning on December 26th, and competent authorities will follow up and record the details of the upcoming event for residents of the Sultanate.

In this context, Anwar Said Al Balushi, Director of Tourism Events at the Ministry of Tourism, said: “We are pleased to cooperate with the Omani Astronomical Association and the competent Authorities involved in preparing the annular eclipse programs, where the importance of the project lies in the fact that it promotes scientific tourism in the Sultanate and contributes to the consolidation of the Ministry’s efforts to make it one of the most important destinations on the global tourism map."

The project aims to raise the level of awareness of individuals in society about the phenomenon and introduce them to the Sultanate’s capabilities in safe monitoring by organizing mass monitoring activities in various governorates of the Sultanate and astronomical camps in a group of sites that the path of the annular eclipse is on."

Al Balushi added: “We look forward to providing in this project, a unique experience for residents and visitors, in addition to stimulating researchers and scientific institutions to establish research and scientific studies related to the phenomenon of the eclipse of the sun. We are confident that the efforts made to advance scientific research and stimulate scientific tourism will contribute to building generations of amateur and specialized astronomers.”

In turn, Ali Amer Al Shebani, Vice-Chairman of the Omani Astronomical Society and the project's supervisor, said: “The annular eclipse phenomenon is one of the most rare natural phenomena that deserves to be followed, and the Sultanate of Oman’s share of the annular eclipse will be abundant, as the Sun will look like a ring in a ring in the governorates of Al Dakhiliyah, Al Wusta and South Sharqiyah, along with the possibility of viewing and monitoring the partial eclipse from the rest of the Sultanate’s governorates.”

Furthermore, the project comes with a number of programs and events, the most important of which are the promotional campaign for the Sultanate of Oman in partnership with the Ministry of Tourism, and the awareness campaign for the safe monitoring of the solar eclipse phenomenon in cooperation with the Ministry of Health to educate various groups of society and sensitize them to safe means of monitoring to ensure their safety, and the educational program to spread astronomical culture that targets male and female students of schools in coordination with the Ministry of Education and the exhibition of astronomical 2020 in partnership with the Omani Society for Photography to encourage photographers to photograph the phenomenon of the eclipse of the sun and highlight the beauty of Oman, scientific researches and studies for the phenomenon of solar eclipse with a number of colleges and universities.

The association will also organize, in cooperation with the Ministry of Awqaf and Religious Affairs, mass monitoring activities in the various governorates of the Sultanate and the ring eclipse camp in Ras Al Ruwais, with a number of astronomical telescopes equipped with solar filters.

The Omani Astronomical Society will also organize with the Omani Association for Persons with Hearing Disabilities a special astronomical camp for those with hearing disabilities.

The society will announce sites for mass monitoring activities spread throughout the governorates of the Sultanate, to achieve the opportunity for all segments of society to monitor the phenomenon.