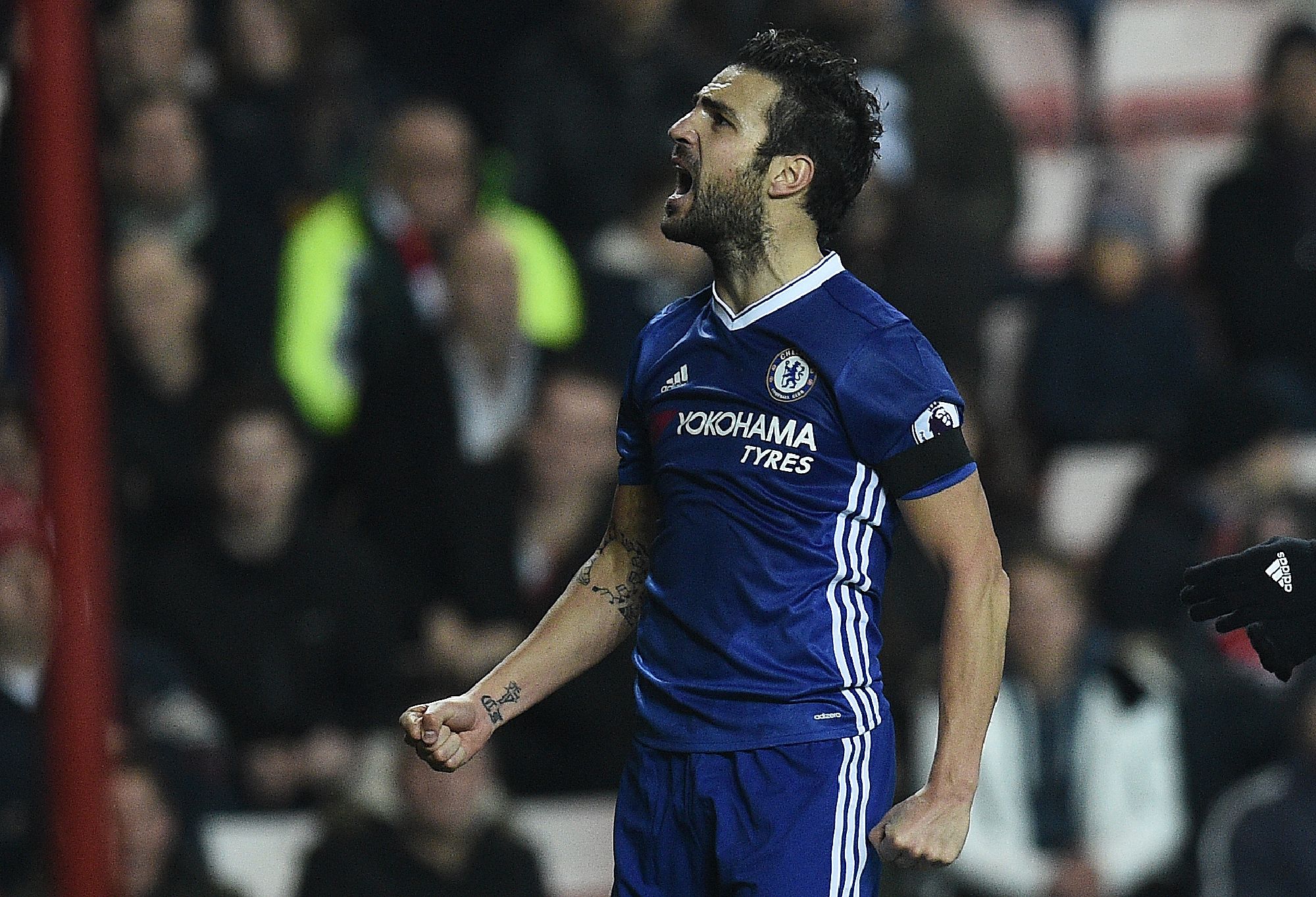 London: Chelsea maintained their stranglehold on the Premier League by beating Sunderland 1-0 on Wednesday to register their 10th successive win and move six points clear at the top of the table.
Cesc Fabregas's first-half strike ensured the Blues took full advantage of Tuesday's slip-up by second-placed Arsenal to leave Liverpool, 3-0 winners at Middlesbrough, and Manchester City, who beat Watford 2-0, to keep up the chase.
Manchester United continued their recent improvement with a 2-1 victory at Crystal Palace and West Bromwich Albion's Salomon Rondon took the individual honours with a hat-trick of headers in a 3-1 win over Swansea City.
Chelsea's win was particularly welcome because it came without the injured Eden Hazard.
One of the secrets behind their success has been continuity of selection so manager Antonio Conte will be delighted at the way his revamped midfield of Fabregas and Willian combined beautifully just before halftime for the Spaniard to score the goal which confirmed Chelsea's best run since 2005-06.
"Cesc is a good player for us," Conte told reporters.
"I have four midfielders and it is important for me to evaluate the form of the single players, some games you need players more physical and some games more technical. It is important that Cesc had a good game.
"I prefer my players not to look at the table and to focus on the next game in three days. We must prepare very well to have a good Christmas."
That seems guaranteed since Chelsea will definitely top the table on Dec. 25. On each of the previous four occasions they have done that they have gone on to win the title.
Liverpool overtook Arsenal in second place after a comfortable 3-0 win at Middlesbrough with Adam Lallana involved in all three goals, scoring twice and laying on another for Divock Origi.
Manager Juergen Klopp reacted to dropping five points in the last two games by picking Simon Mignolet in goal ahead of Loris Karius and the Belgian responded with one outstanding save in a clean sheet.
RECENT STUTTERS
Manchester City also put recent stutters behind them as goals from Pablo Zabaleta - his first in two years - and David Silva secured a 2-0 win over Watford, only their fifth victory in 16 games.
Fifth-placed Tottenham Hotspur comfortably overcame Hull City 3-0 while Jose Mourinho's Manchester United are starting to get a return on the huge money they invested in Paul Pogba and Zlatan Ibrahimovic.
James McArthur looked to have earned Palace a point after cancelling out Pogba's opener but Swede Ibrahimovic struck two minutes from time to delight his manager.
"It was an amazing performance for a guy who is 35 years old, scoring goals, being a leader, amazing," said Mourinho after overseeing United's first back-to-back league wins since August.
West Bromwich Albion moved up to seventh, one place behind United, after Rondon became the first player to score a headed hat-trick in the Premier League since Duncan Ferguson in 1997.
The goals came in a devastating 13-minute burst early in the second half as Swansea succumbed to the defensive frailty that has dogged them all season.
Their only consolation was that most of the sides around them also lost, West Ham being the exception after beating Burnley 1-0 with a goal from Mark Noble after his penalty was parried by Tom Heaton.
Stoke City striker Marko Arnautovic was sent off in his side's 0-0 draw with Southampton, Stoke boss Mark Hughes's 400th game as a Premier League manager.