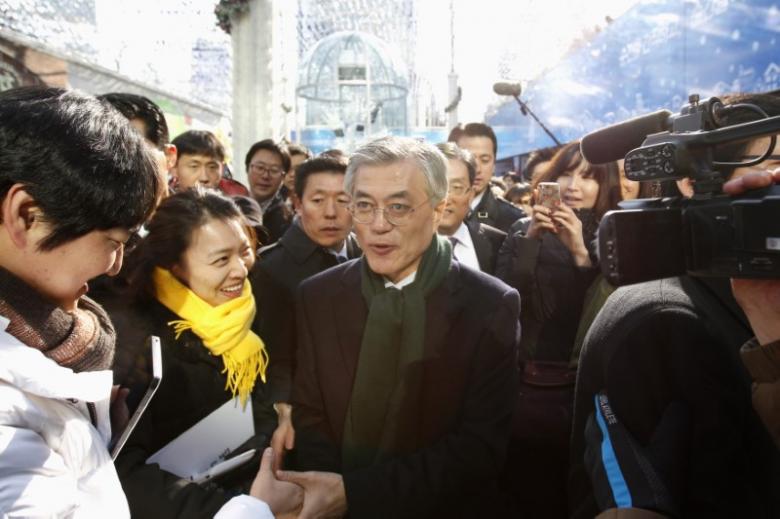 Seoul: The former leader of South Korea's main opposition party, who is leading polls of candidates to be the next president, said on Thursday deployment of a U.S. anti-missile system that has antagonised China should be decided by the next administration.
Moon Jae-in, 63, who lost the last presidential election to Park Geun-hye by 3 percentage points, confirmed he would run in the next election, which is scheduled for the end of 2017 but could be much sooner if a Constitutional Court upholds an impeachment vote against Park and she has to leave office.
South Korea and the United States agreed this year to deploy a Terminal High Altitude Area Defence (THAAD) anti-missile system in response to North Korean nuclear and ballistic missile tests.
But China vehemently opposes the system's deployment in South Korea, fearing its radar would be able to penetrate its territory. Russia also opposes it.
The missile system has also raised opposition in South Korea, particularly in the area where it is due to be based.
Uncertainty surrounding Park following a vote in parliament to impeach her last week, the timing of the next election and the change of administration in the United States have contributed to questions about the timing of the deployment of the system.
Moon told a news conference in Seoul it should await a new president in South Korea.
"It is inappropriate for the THAAD deployment process to go on under the current political circumstances," he said.
The commander of U.S. Forces Korea said last month the THAAD battery would be deployed to South Korea within eight to 10 months.
Moon held out the possibility of renegotiating the agreement to deploy the system, saying doing so would not damage relations with the United States. He said if elected, he would work to maintain strong ties with the United States, which has 28,500 troops in South Korea.
Moon came top in a poll of possible presidential candidates released on Thursday by Realmeter, with 24 percent, compared with 19.5 percent for outgoing U.N. Secretary-General Ban Ki-moon, who is widely expected to enter the race though he has yet to declare his intention to do so.
Moon, who is a liberal, criticised the conservative Park's policy on North Korea for failing to end its nuclear programme.
He said a two-track approach involving more talks would be more effective, adding he would be willing to meet North Korean leader Kim Jong Un, if certain conditions were met.
This month, South Korea said it would pursue further unilateral sanctions against the North after its fifth and largest nuclear test in September.
New United Nations Security Council sanctions, designed to cut North Korea's annual export revenue by a quarter, were imposed after the test.
The Constitutional Court has up to 180 days to uphold or overturn parliament's vote to impeach Park, who has been stripped of her powers while she awaits the court's decision.
If she leaves office early, an election would be held in 60 days.