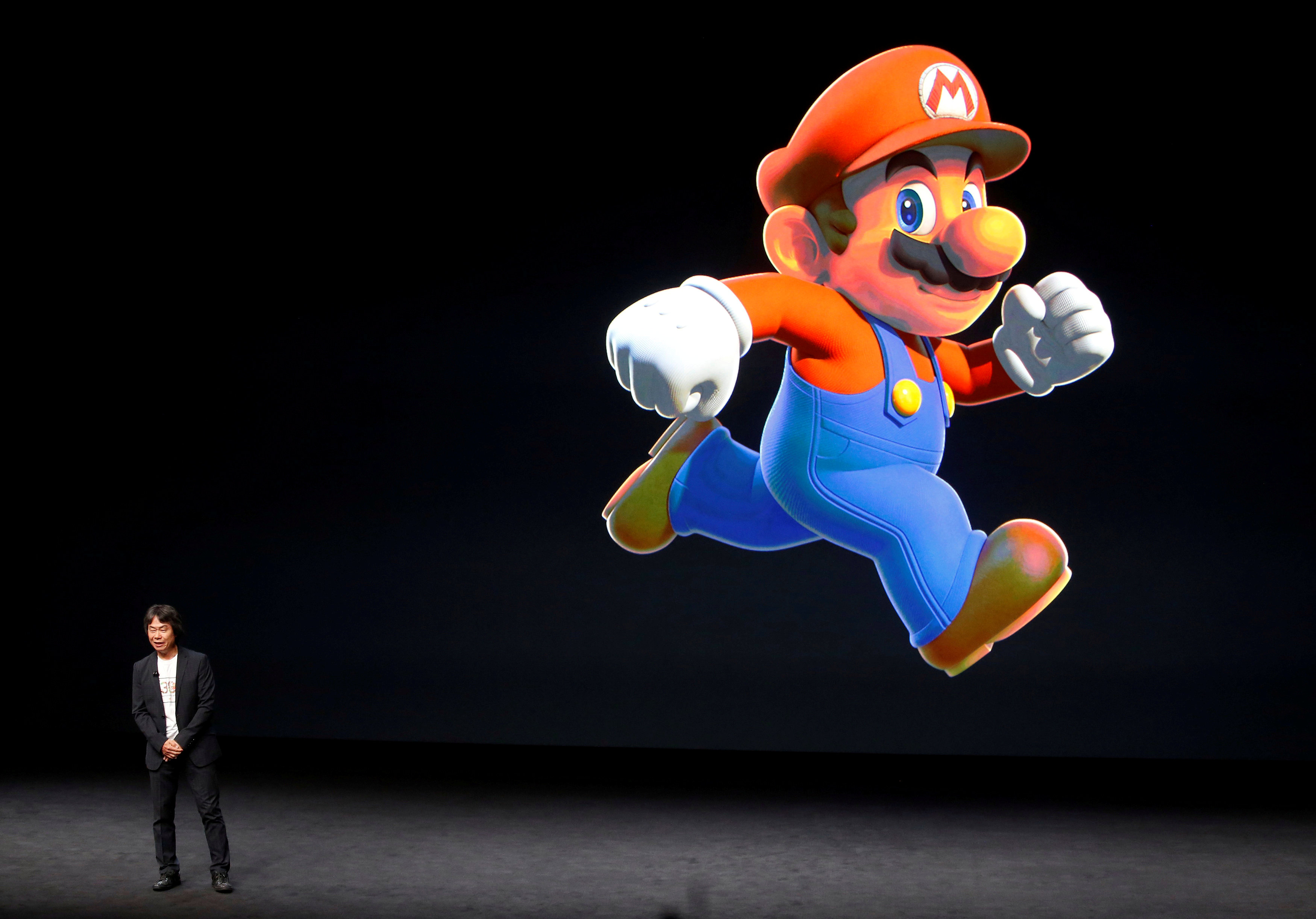 After almost two years of waiting, the big day is finally here for Nintendo Co. and its first game for smartphones, Super Mario Run.
The release for Apple Inc.’s devices on Thursday is the first full test of what the Japanese game maker can achieve after years of eschewing the thriving mobile-app market. While Nintendo gave a hint of its potential with the success of Pokemon Go earlier this year, that title was only partly its own creation.
Super Mario Run was developed mainly by Nintendo, with some assistance from partner DeNA Co. Expectations have swelled since the Kyoto-based company announced a strategic shift toward embracing mobile in March 2015, adding almost $20 billion to its market value. Yet amid the euphoria, some are already discovering holes in execution. Macquarie Securities analyst David Gibson finds it puzzling that the game requires an internet connection and worries that the $10 price tag for the full version might be too aggressive, especially for users in developing countries.
"It’s not like it will be Pokemon Go of 500 million downloads in two months,” Gibson said. Instead, he’s estimating about 200 million downloads by the end of March, with a tenth of users paying $10 for the full version. "Nostalgic Nintendo players will almost certainly spend. But what matters is if the marginal customer says this is good, yeah, I’ll spend the money.”
Investors are counting on Nintendo’s ability to breathe new life into the arcade and console icons of its heyday by getting them into peoples’ palms. Players get access to three levels with the free download while $10 will unlock all 24 stages. Super Mario Run will be available after midnight Pacific time (5 p.m. in Japan) in more than 150 countries.
For now, the initial list of places where Super Mario Run will be available doesn’t include China, the world’s largest app market, which accounts for a quarter of all app revenues, according to Newzoo. The decision to release the title first on Apple devices also runs the risk of alienating gamers on Android, which account for about two-thirds of the world’s 2.3 billion smartphones, according to the researcher. A version for Google’s smartphone software will be released sometime in 2017, Nintendo said, without specifying a date.
Some analysts are sticking to their bullish forecasts. Atul Goyal at Jefferies Group sees 500 million downloads by the end of March, with 10 percent of users paying for the full version. He expects Nintendo’s stock to jump to 39,200 yen within 12 months, more than 40 percent higher than the shares at 12:54 p.m. Thursday. The stock fell 1.3 percent to 27,615.
His optimism stems from the fact that unlike Pokemon Go, which was developed by Niantic Inc., Super Mario Run is being created almost entirely by Nintendo. That means most of the proceeds will flow directly to the company.
"The sell-side has not yet factored in the potential revenues and profits and is waiting to see how the game actually performs,” Goyal wrote in a report on Wednesday. "As the market is able to better understand the importance of these strategic moves, the earnings estimates will move up over time.”
New footage and demos revealed last week did little to dispel concerns that game will largely lack the novel features that made Pokemon Go a global hit. Fans in love with Nintendo’s characters may be willing to overlook that, but for other casual gamers the lack of a fresh concept may limit their willingness to pay for the full version.
That’s why Macquarie’s Gibson is focused on the steep price tag. Gibson points out that the most successful paid game to date, the $7 Minecraft Pocket Edition, makes just $84 million a year. That’s one of the reasons why his projection for Nintendo’s stock price is 25,400 yen per share, below current levels.
"I wouldn’t be surprised to see we wake up Monday or the weekend, and it’s #1 in many countries around the world in terms of gross revenue,” said Gibson. "But within a short period of time that is not the case, then it loses that momentum.”