Fun facts: All about dolphins 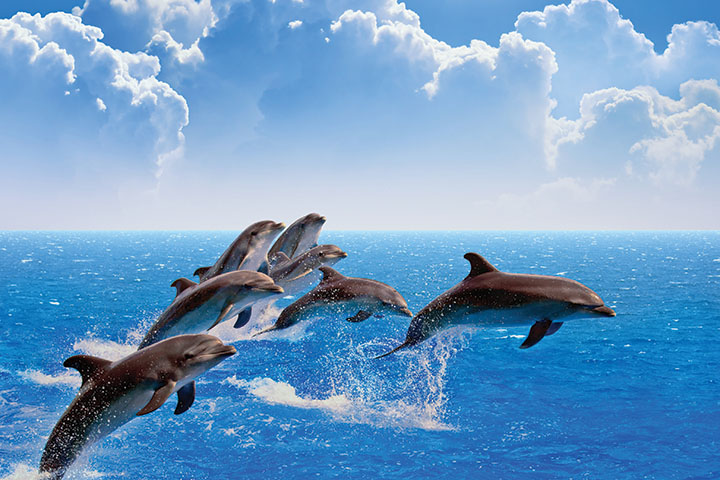 Dolphins, porpoises, and whales are closely related and belong to a group of mammals called cetaceans. There are about 40 different species of dolphins.
Dolphins have been revered by many cultures throughout history. Dolphins were often described in ancient Greek mythology and were said to be messengers for Poseidon, the deity of the sea.
Vive la différence! Dolphins, whales and porpoises have many similarities, and people often confuse the groups. Dolphins have a beaklike snout and cone-shaped teeth. Porpoises have a more rounded snout and flat or spade-shaped teeth. Baleen whales tend to be larger than their dolphin and porpoise cousins and have no teeth. Dolphins have torpedo-shaped bodies with smooth, rubbery skin, perfect for moving through water quickly and easily. A layer of blubber beneath the skin helps keep the dolphin warm and stores energy reserves.
Blowhole
A dolphin breathes through a nostril on top of its head, called a blowhole. When underwater, the dolphin closes the blowhole. Dolphins surface once or twice a minute to breathe air.
River dolphins
These dolphins are found in brackish or freshwater rivers, lakes and estuaries of Asia and South America. Populations are very vulnerable to dam-building, entanglement in fishing nets, boat traffic and pollution. Dolphins can be found in oceans around the world, from colder northern and far southern waters to warm tropical regions.
Most dolphins have a dorsal fin, but northern right whale dolphins and southern right whale dolphins do not. The dorsal fin acts like a boat keel and helps the dolphin balance when swimming.
The Amazon River dolphin
It is the largest species of freshwater dolphin. This pinkish-gray dolphin feeds on crabs, shrimp, and catfish.
Mammals, not fish
Dolphins, whales, and porpoises are mammals, not fish. They feed their young with mother’s milk. Like all mammals, dolphins have lungs and are warm-blooded, which means that their core body temperature always stays about the same, no matter what the temperature of their surroundings.
Echolocation
Dolphins use echolocation, a series of clicking sounds, to help them navigate and locate underwater objects. The clicks are sent through the melon, a special organ on top of the head. When the sound hits an object, it produces an echo that reflects off the object. By listening to the echoes, the dolphin can identify the location of an object.
Bottlenose dolphins
Bottlenose dolphins are often seen in aquariums and zoos and are appreciated for their playful, friendly dispositions. Although known as killer whales, orcas are dolphins, not whales.
—[email protected]