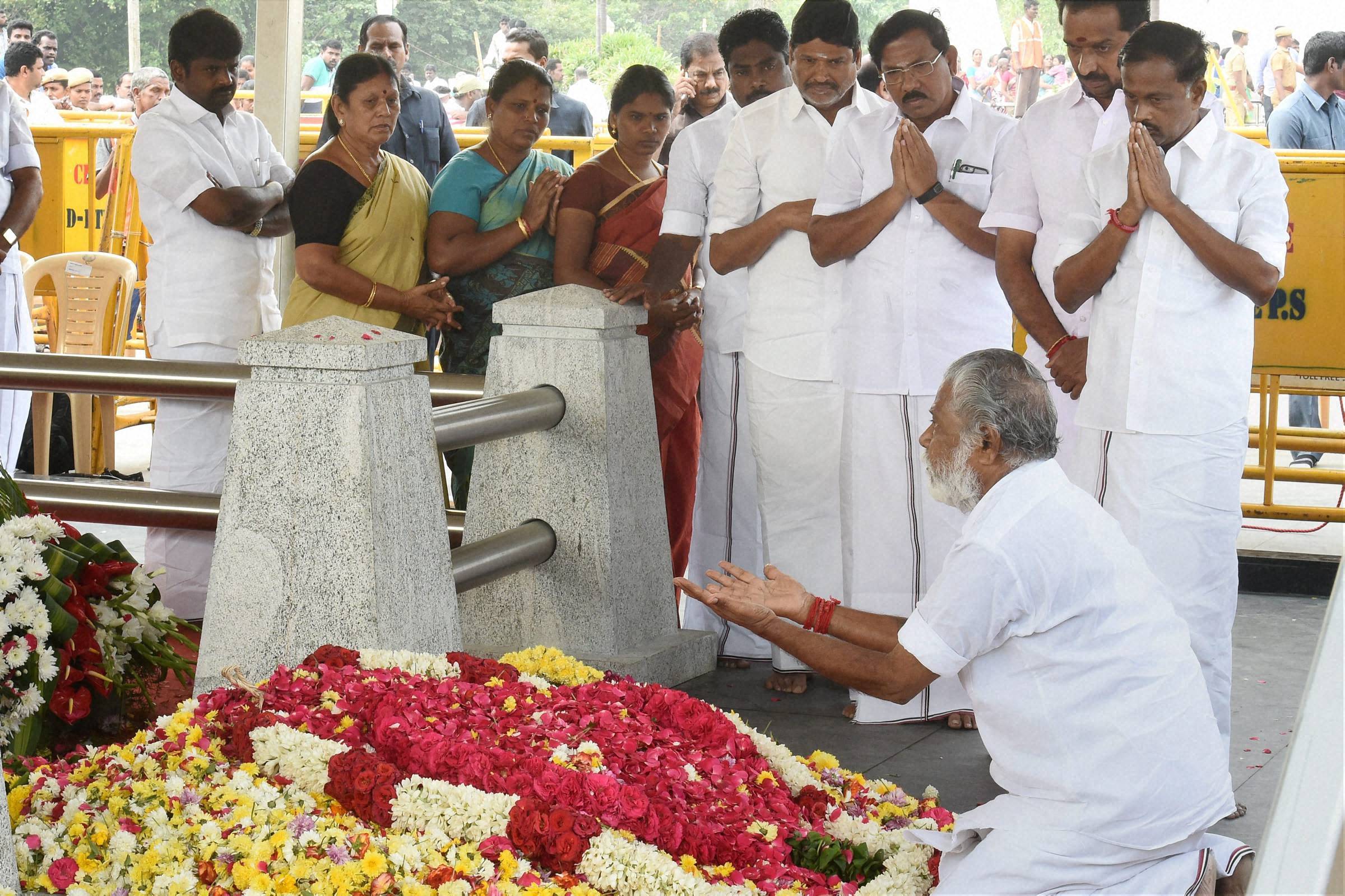 Chennai: Tamil Nadu Cabinet on Saturday decided to recommend late All India Anna Dravida Munnetra Kazhagam(AIADMK) supremo J. Jayalalithaa for India's highest civilian honour, the 'Bharat Ratna'.
In its first meeting chaired by Chief Minister O. Panneerselvam after Jayalalithaa's demise, the Cabinet also decided to recommend to the Centre installation of her life-size bronze statue in Parliament complex.
"A resolution was adopted in the Cabinet to recommend to the Centre to award Bharat Ratna to honourable Chief Minister J Jayalalithaa," an official statement detailing the decision taken in Saturday's meeting said. Further, the Council of Ministers resolved to urge the Centre to install her bronze statue in the Parliament complex, and proposed to raise a memorial building for the deceased leader at the MG Ramachandran (MGR) Memorial site, where she was laid to rest on Tuesday at an estimated cost of Rs150 million.
The Cabinet further resolved to rename the memorial as Dr Puratchi Thalaivar MGR and Puratchi Thalaivi Amma Selvi J Jayalalithaa Memorial, it added.
The Cabinet also proposed to unveil a portrait of the leader in the Tamil Nadu Assembly. Panneerselvam also had a small portrait of his predecessor on his desk. The Cabinet adopted a resolution condoling Jayalalithaa's death. It said the 68 year-old leader had dedicated her life for the betterment of the people of Tamil Nadu, and help the state take giant strides in sectors like social welfare, education and growth. She was fondly addressed as 'Amma' (Mother), it said.
Tracing her life from her being born to Sandhya-Jayaram in 1948, it said Jayalalithaa grew to be a bright student in school and excelled in arts like music and dance. It also recalled her successful film career, her skills of speaking several languages and also hailed her as a voracious reader. She had made her political entry in 1982 under the tutelage of M G Ramachandran and her speech at the Cuddalore public meeting was indicative of her successful political career, it said.
She was even lauded by former prime minister Indira Gandhi for her speeches in Rajya Sabha on issues including internal security, it said. She was an "unparalleled leader" in the sense that she was AIADMK General Secretary for 28 of her 35 years of public service, a seven-time MLA and leading the party to many victories including the 2011 and 2016 assembly polls and 2014 Lok Sabha elections, it said.
She had overcomed many challenges presented by rivals and had ruled the state with the sole motive of people's welfare, it added. The Cabinet said Jayalalithaa had donated gold jewelleries she was wearing to then prime minister Lal Bahadur Shastri during the 1965 Indo-Pak war.
The Cabinet also hailed her active contribution on the Sri Lankan Tamils issue, including batting for a separate Tamil homeland of Eelam and moving a resolution in the Assembly. It also referred to her various populist measures like free rice and said it had benefited people immensely. She had also brought the 69 per cent reservation for OBC, it said.
"We promise to work in the path laid down by Amma who is now watching us perform" from Marina where she was buried, the ministers said, condoling her death.
Earlier, Panneerselvam and other ministers paid floral tributes to Jayalalithaa's portrait and then held the meeting.