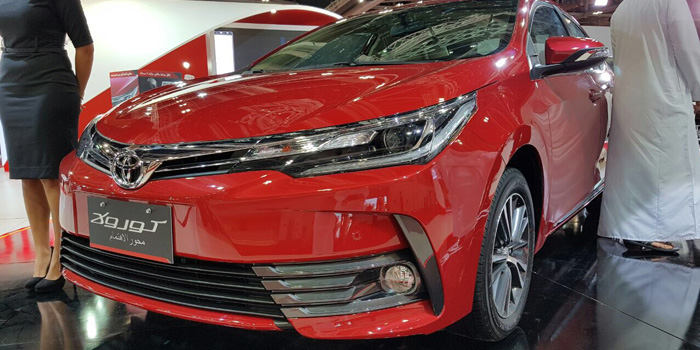 Muscat: The need for “satellite” businesses built around big established companies in the automotive sector can prove advantageous for the small and medium enterprises (SMEs) and help improve the economy, said HH Sayyid Tarik bin Shabib Al Said.
HH Sayyid Tarik Al Said inaugurated the 18th annual Oman International Motor Show yesterday at the Oman Exhibition and Convention Centre. Upon his arrival, Toyota unveiled its All New Corolla 2017 while Lexus unveiled its 2017 IS.
The motor show is a platform where brands in the automotive industry market their products and enhance sales. This year’s motor show witnessed an increase in the hybrid vehicles as car manufacturers are adapting to the current economic situation.
“I found it quite interesting that the exhibitors are adapting to the new climate. As a result, there were a lot more fuel efficient cars. We’re noticing hybrids emerging on the scene,” said Sayyid Tarik.
“Generally, the automotive sector can create many jobs. Also, SMEs can benefit by providing services built around the large players,” said Sayyid Tarik.
Third biggest market
According to the Oman Automotive Market Report 2016, the Sultanate is the third largest automotive market in the GCC after Saudi Arabia and the UAE.
The automotive sector is expected to grow by approximately 7.5 per cent annually. The market boomed from 114,000 units in 2004 to 213,924 in 2014.
“There is always a need for ‘satellite’ businesses around these big established businesses. This is where I see the real advantage, as the smaller business can benefit from this trend,” said HH.
Khalil Al Oufi, Mitsubishi Motor’s Sales Manager, believed the automotive industry can help uplift the Omani economy.
“It does help the economy in a way. With the increase in fuel prices, we should be more economic. Now we have SUVs for 7 passengers with all the features the consumer needs while ensuring that it is fuel efficient,” said Al Oufi.
The Oman Automotive Market Report 2016 stated that “Oman plans to establish an Iranian car production site through financing provided by the Sultanate, which can be one of the most important moves to develop the auto industry.
“One of the plans is to build an automobile spare parts manufacturing project in Sohar to produce aluminum automobile wheels in cooperation with a South Korean company. A lot of efforts are made by the private sector to develop the automotive industry,” the report added.