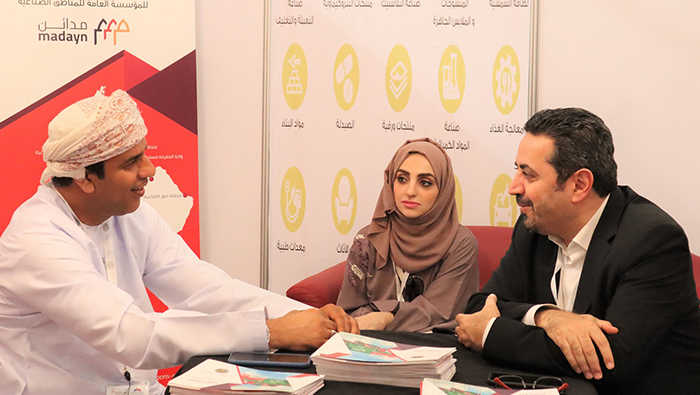 Muscat: An outstanding turnout of business owners and investors flocked to the pavilion of the Public Establishment for Industrial Estates – Madayn at the ninth edition of the international food, beverage and hospitality exhibition – Horeca 2019 in Riyadh, Saudi Arabia.
Held at Riyadh International Convention and Exhibition Centre, the event welcomed around 370 companies representing more than 40 countries. A number of Omani companies and factories took part in the event under the umbrella of Madayn and showcased their variety of products to the visitors.
Hamood bin Abdullah Al Balushi, Director of Omani Products Department at Madayn commented that the event presented an ideal opportunity to disseminate awareness on ‘Made in Oman’ campaign. “We aimed at the event to elaborate on the objectives of the campaign and introduce the investors and consumers to a variety of Omani products and their capability to compete locally and internationally,” Al Balushi pointed out.
Al Balushi noted that Horeca 2019 also offered a great platform to introduce the investors to the various investment opportunities available in the industrial cities of Madayn. “It was a great opportunity to highlight these opportunities as the development project of Samail Industrial City is nearly completed on an area of more than 7.5 million sqm, and the 7th phase of Sohar Industrial City covers an area exceeding 21 million sqm,” he said.
He added, “We highlighted the incentives and facilities offered by Madayn to the investors which include lease period of lands and facilities for up to 30 years, renewable for the same period (83.5 baisa/per meter per month); right to waive the lease right for the remaining period of the contract; right to sell constructions and buildings on the leased land; right to involve new partners in the lease contract; fair evaluation of buildings and facilities upon the termination of the lease contract; developed and equipped lands with basic services (water, electricity, telecom, roads); and transparent legal frameworks illustrating rights and obligations; punctuality in service delivery; among other incentives.”
Representatives of the participating companies under Madayn emphasised that this kind of specialised exhibitions play a key role in boosting the presence of Omani products in various international markets. Abdulaziz Al Shehri, director of public relations at Oman Foodstuff Factory (Al Mudhish) office in Saudi Arabia, noted that the company has received demands for its products during their participation at the exhibition which was visited by investors, business owners and commercial agencies. “Al Mudhish’s participation in such exhibitions aims at exploring new markets on the one hand and boosting relations with the consumers on the other hand,” Al Shehri pointed out.
Hamad Al Rashdi, marketing officer at the National Tea Company (Mumtaz) explained that Horeca 2019 presented a good opportunity for the company to promote its high-quality products in the Saudi market and meet with various business owners and investors. Al Rashdi said that the company has factories for processing and packing tea and coffee. These factories are located at Al Rusayl Industrial City and both the factories are equipped with modern and advanced machinery and equipment.
Imad Moussa, sales officer at Areej Vegetable Oils and Derivatives office in Saudi Arabia, said that the event offered the opportunity for the company to introduce their products and expand their reach and distribution in Saudi Arabia. He added that the company was established in 1982 with a total production capacity of around 9,000 tons per year and with only one production line. “The company has further developed and the production capacity has recently touched more than 240,000 tons per year to meet the growing demand for the company’s products from overseas markets including the Saudi market,” Imad elaborated.
It is worth mentioning that Madayn’s participation in the exhibition comes along the lines of its national campaign of promoting the locally manufactured products (Made in Oman Campaign). The campaign aims at emphasising on engendering national pride; encouraging consumers both individuals and organisations to choose locally manufactured products and services; underscoring the competent capabilities of the Omani products to compete locally and internationally, and stressing the importance of buying Omani products and its direct contribution to the national economy.