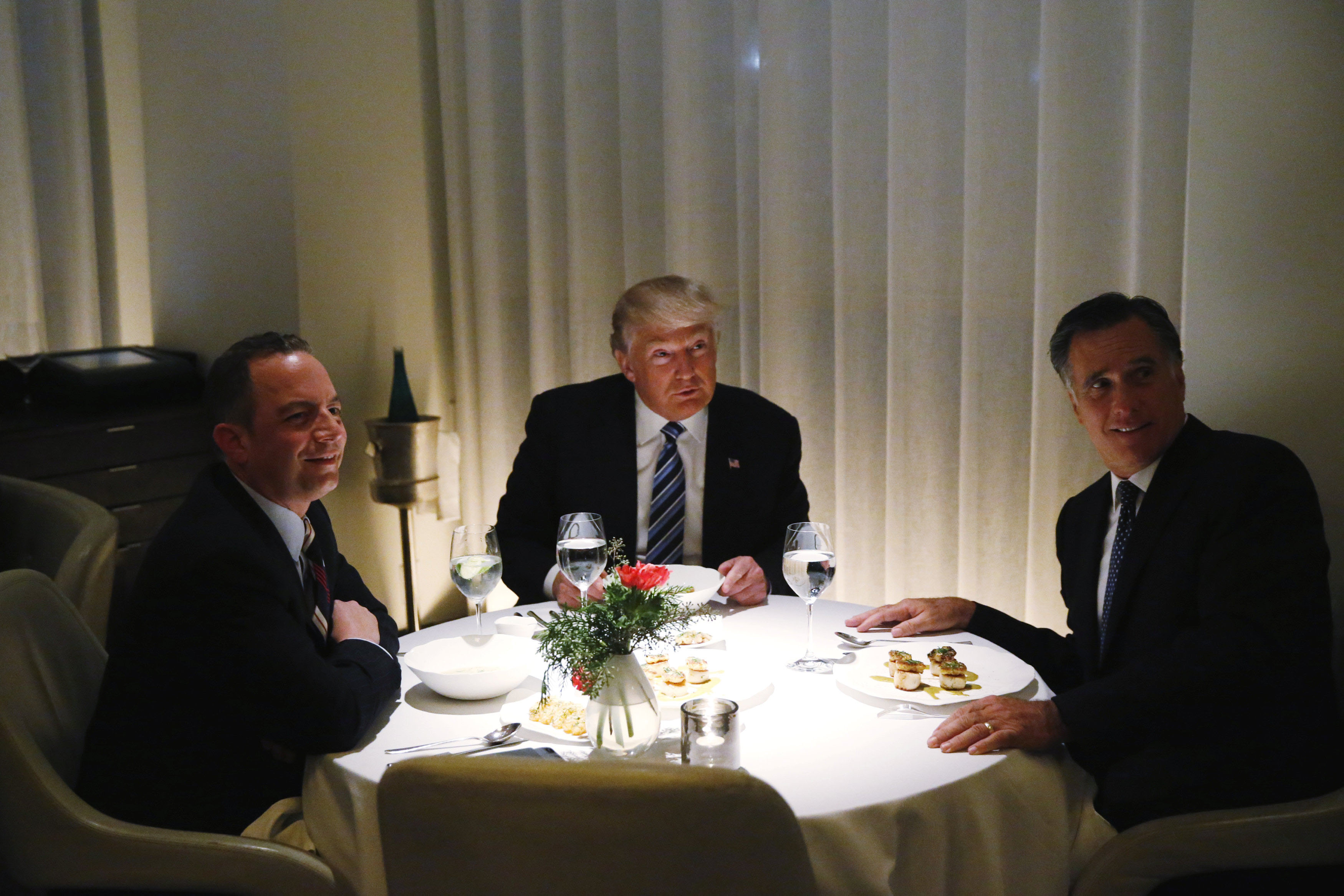 Choosing Mitt Romney to be his secretary of state would be the most presidential thing Donald Trump could do.
But that doesn’t mean he's going to do it.
Deciding who will be the country’s top diplomat is a perfect demonstration of just how hard it is for Trump to act like a president versus being, well, Trump.
On the one hand, by inviting an enemy who called him a phony and a fraud into the room because he could be the best person for the job shows grace in victory.
On the other hand, why shouldn’t Trump be Trump and revert to his more familiar impulses? To the amazement of all experts and pundits, it got him to the White House. Why not drag out the selection process? Just as he knows more than the generals about how to defeat IS, Trump knows more about being secretary of state. Witness how he treats heads of state like chief executive officers. When Pakistan or Taiwan calls, ladle on the charm. You never know who you’ll want to make a deal with. For those who had hoped he would grow into the job, Trump's conduct in the transition suggests he’s not able to adjust to his new circumstances.
In the president-elect's first post-election event in Cincinnati on Thursday, he was unable to De-Trump himself. He seemed happier than he had for a long time, and certainly more at ease than in his victory speech, when he almost looked stricken. He detoured from the script, to gin up the audience to fever pitch. "We did have a lot of fun fighting Hillary. Didn't we?" Trump said, beaming as the crowd loudly chanted "Lock her up!"
Then, with the boyish enthusiasm and mischief that Melania described, Trump couldn’t keep secret a minute longer: He told the crowd that James Mattis, a retired Marine general, would be his secretary of defence.
State is arguably Trump’s most important cabinet appointment, and he is keeping the suspense intact, toggling between personas -- gracious victor and vengeful victim. One part of him thinks that Romney, the CEO of the global firm Bain Capital, a turnaround artist who saved the Salt Lake City Olympics, and the party’s nominee in 2012, would have the stature and gravitas for the job. He liked that Romney made a warm, congratulatory call. He hosted him at his golf club in Bedminster with a big thumbs up after. He complimented Romney for “looking the part.”
OK, but Romney dissed Trump bigly and Trump’s nonpresidential side likes nothing better than getting even, and then some. It took a while, but one reason friends say Trump ran for president was to show the establishment he wasn’t letting the ridicule heaped on him by President Barack Obama at the White House Correspondents Dinner in 2011 go unanswered. The dealmaker, and breaker, knows revenge is a dish best served cold.
While General David Petraeus, General John Kelly and Senator Bob Corker came and went, Romney got the only invitation to a fancy dinner at the Trump International Hotel. But the dinner was more "Godfather" than the "Odd Couple." Three men looking more pained -- Chief of Staff-designate Reince Prebius chaperoned -- would be hard to imagine. Romney ordered scallops and then ate crow for reporters waiting outside right after, which may have been Trump’s plan. Aides said Romney would have to grovel to be considered and so he did, gushing over the man who had derided him in his 2012 campaign. Romney said that by getting elected Trump “did something I tried to do and was unsuccessful in,” and that the president-elect could be “the very man who can lead us to that better future.”
All but a bro-hug. About watching Romney recant and twist slowly in the wind, former Speaker Newt Gingrich said, “You have never, ever, in your career seen a wealthy adult who is independent, has been a presidential candidate, suck up at the rate that Mitt Romney is sucking up,” adding that “Every day they let this thing hang out there it becomes harder and more expensive to pick Romney.”
Indeed. Although Trump later said dinner was pleasant, it wasn’t pleasant enough to keep him from adding yet another candidate. He’s now interviewing Exxon Mobil CEO Rex Tillerson, a curious addition, unless he’s decided to fulfill a campaign promise of confiscating oil in Middle Eastern countries.
So is this the show that will open at the White House on Inauguration Day or could we get a president being all presidential? If Trump brings his nonpresidential act to the Oval Office, it’s hard to see how he manages Speaker Paul Ryan or Senators Mitch McConnell or Chuck Schumer. Unlike Romney, they don’t come as supplicants, vying for his favour. They have jobs in a co-equal branch of government.
There’s an old joke about how Richard Nixon grew in the presidency when he stopped pouring ketchup on his cottage cheese. Trump has to do his own growing, moving from Twitter president-elect to a sober and grounded president. He only has a little more than a month to do it. He could start by choosing the best man for secretary of state. - Bloomberg View