This weekend, get back to nature with Oman's traditional Bedouin life! 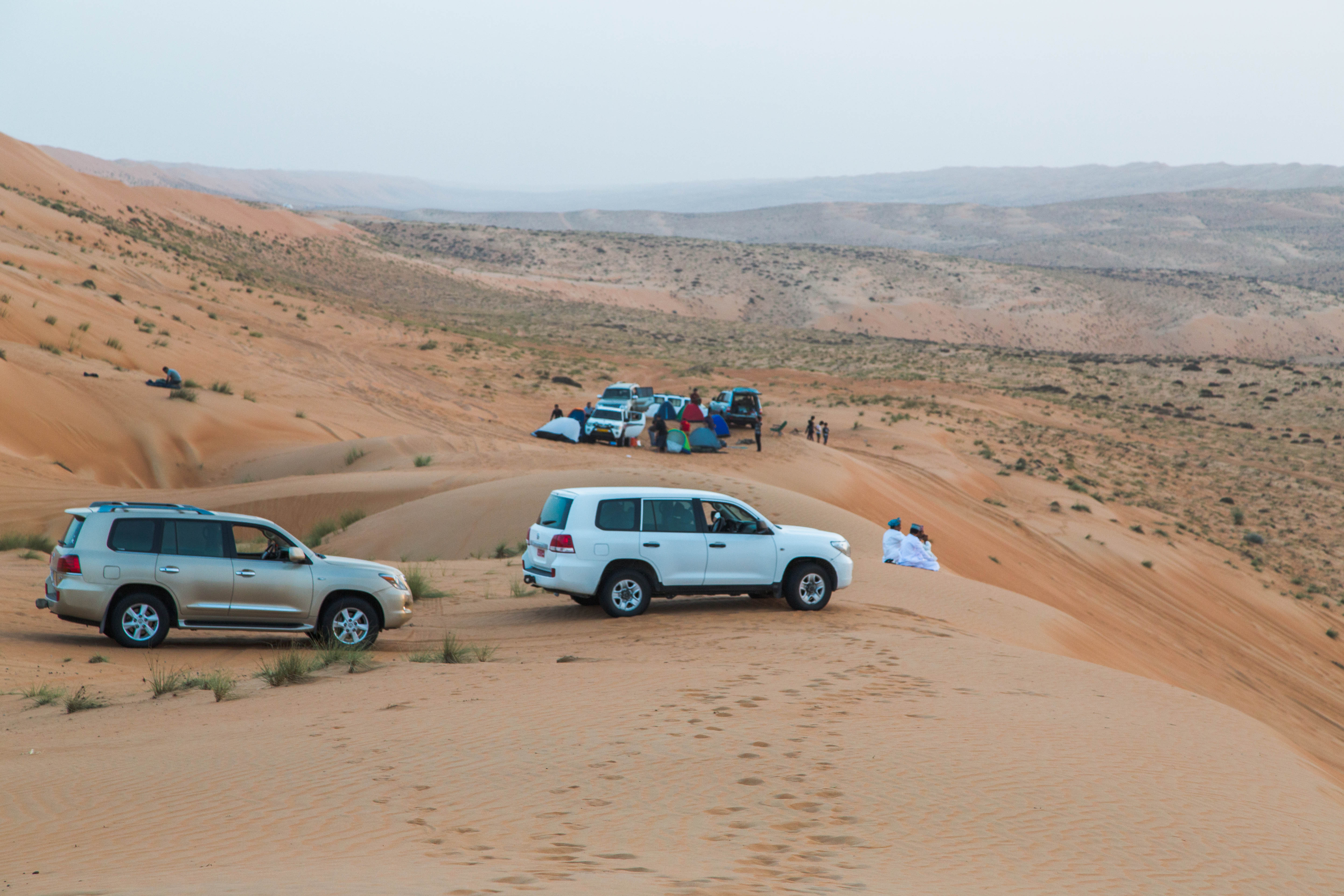 What do you like most about an outdoor trip? For me, my favourite part of any excursion is meeting people from different cultures and nationalities.

Though, when I set off for the Sharqiyah Sands, my head filled with fantasies of getting lost in time amid the dunes, camels, and Bedouins, I was more interested in getting to know four-legged, one-humped creatures, rather than the two-legged kind. I never imagined that my camel seeking journey would turn out to be one of the most enlightening experiences I’ve had in Oman so far.

The long national day weekend and my almost absent social life provided me the perfect opportunity, so last Wednesday morning, I picked up a colleague and drove south for about two hours to the office of Bidiyah Safari. There I met Hamed, our guide for the day, who loaded us into his Land Cruiser and took off down the broad highway roads, which narrowed into the dirt passage way through Rakah village, finally spitting us out into the desert sands.

My excitement grew as I began spotting little sand dunes from afar that grew taller and taller as we approached. The landscape wasn’t the only thing that transformed as we moved deeper into the desert — the Land Cruiser began to growl like a monster and Hamed became a wildman behind the wheel.

We charged up and down the dunes following the tyre tracks created by the 4x4s that came before us and making new tracks of our own. I was so glad that I hadn’t eaten much in the morning as it was an exciting, but gut-churning affair.

We kicked up a plume of dust as we slid to a stop under a big tree. There, two German tourists sat on a huge mat enjoying coffee and dates with some Bedouins as camels were loitering around them. Upon getting out of the vehicle and surveying our surroundings, we realised that there was nothing else for at least a three km radius — just sun, sand, and patches of dry vegetation trembling in the breeze.

We joined the Germans, a father and son who were eating plates of rice and chicken stew, and were handed our own plates of rice and saloona. No spoons. I looked around and realised everyone was scooping the mixture up with their fingers. Initially I felt uncomfortable, as I’m unaccustomed to eating with my hands, but once I started to dig in, I realised that somehow the food was even more delicious eaten this way. We started chatting with the tourist and learned that the father, now 78 years old, was a lifelong adventurer, having climbed Mount Kilimanjaro at the age of 70, and the pair had been going on such trips every two years since the son’s teenager years. In between bites, Hamed cracked German and Arabic jokes.

Full and happy, I got up to go meet the camels. They had more personality than I ever expected: Some were grumpy, some indifferent, and a few of the cuties clearly loved attention. Hamed joined me and began to explain. “Camels keep grudges, and it’s not very difficult to make them angry,” he said. “If they don’t like you they will kill ou while you are sleeping,” he added, almost as an after thought.

I laughed, thinking he was kidding, but his stern look told me differently. I backed away from the angry-looking camel, clicking selfies with the friendlier one nuzzling my arm.

Set away from the others was a small enclosure with delicate-looking camels. Hamed explained that they were race camels, the most expensive camels in the herd. I asked him how they were chosen to race, and he explained that they had to come from a racing bloodline as the traits of a good racer are passed down. Behind us, the Germans had mounted two of the camels and were setting off on a camel safari. We got back into the Land Cruiser and continued to our next stop; the camp.

If our ride to the picnic spot had been shaky, then the 10-minute trip to the camp was earthquake-y. As I bounced around the vehicle, I wondered how Hamed knew the way to the camp with no road, to trail, and no GPS. From what I could see, there weren’t even any landmarks, just dunes stretching to the horizon.

Over the crest of a hill I saw a beautiful mirage in the middle of the desert. When I say beautiful, I mean beee-yooo-teee-fool. I grew up watching the Arabian Nights cartoon series and this little camp could have been pulled straight from a frame in that series. Camels sporting colourful saddles lazily sat outside a majestic, fortress-like mud entrance. We stepped out of the car and entered the camp where we were led to a small majlis and greeted with kahwa, tea, and dates. Before exploring the camp further, I decided to return to the camels, the creatures I was there to meet.

I found them casually sunbathing while two little Omani boys peered at them, seemingly as excited as I was about my introduction to the huge creatures. I attempted an awkward conversation with the kids, made nearly impossible by the fact that I don’t understand a word of Arabic and they didn’t seem to understand a word of English, but somehow through gestures and giggles, they ended up getting me on top of one of the more docile of the herd.

I was almost tossed off from the beginning, as I wasn’t holding on tight enough, and hadn’t figured out how to grip the back end of my ride with my legs, but once I righted myself, it was one of the most fun experiences I’ve ever had. My camel carried me around slowly and effortlessly (as a bonus, it was the first time all year that I didn’t feel like a heavy fatty). With occasional grunts and constant tail wagging, the camel was quickly moving to the top of my list of favourite animals. After meandering around, we stopped outside of a Bedouin hut where four kids were playing outside.

I was under the impression that since the Bedus live so far away from the cities and civilisation and lead a semi-nomadic lifestyle, they were similarly old fashioned in their mindset. This just goes to show how ignorant we urbanites can be. Three women emerged from the shelter and greeted us. The eldest one, who wore a black face mask came forward and strongly shook our hands, both mine and my male colleague’s, something that many local women here in Muscat won’t do.

We followed them into the hut, which turned out to be a temporary set up, without a floor or concrete walls, just woven palm to shade from the sun, and nearby, a traditional outdoor kitchen.

One of the Bedouin woman, Salma, took us to another hut where all their handicrafts were on display. I was amazed to see the creativity of what they had made with such limited resources. There were phone cases and wallets made out of goat skin, wrist bands and sling bags made of colourful woven wool along with other crafts and trinkets made with locally available materials. Salma had no problem having her picture taken, though she wanted to review the shots and re-pose a few times.

I was getting lost in the rustic setting, the hum and rhythm of the women’s voices transporting me somewhere else. Then the sound of Hamed calling to us from outside the camp snapped me back to reality. He told us it was time to head to sunset point.

Honestly, I’m more of an activities person than a sightseeing person, so I was a little reluctant to go, but I didn’t want to be rude, so I said goodbye to the ladies and got back in the Land Cruiser.

We drove up the highest dune and cruised along the ridge of the peak where we passed a number of other cars and people unloading tents while others lounged on camping chairs sipping on cold drinks and talking. We parked a little way off from the rest and got out to watch the desert’s final act of the day. The sight of the fading sun setting the sands alight as it dipped behind the dunes was nothing short of breathtaking. The swirling winds were cool and soothing and the calm stillness was therapeutic.

I sat down in the sand to face the glowing orange ball, lost in thought, feeling the cool breeze gently brushing my hair. Then a spider decided to settle down on my shoulder. My ear-splitting scream broke the dramatic silence, for me and no-doubt though around me. Zen gone, I spent the rest of the sun lit hour racing my friend up and down the hill until the light was gone and it started getting chilly.

The car crawled down the same dune at a near 90 degree angle and took us back to the eco-friendly, solar-powered camp. Strolling along the dimly lit footpath, we passed a number of concrete tents, a huge majlis where people were gathering to socialise, and a small dining area where we stopped to enjoy an Arabian buffet of lamb kebabs, rice with chicken stew, hummus, some salads, and a coke. After our meal, I noticed stairs leading up to the terrace of the dining area. I decided to go have a look, and I’m so glad that I did.

I never knew you could see so many stars with the naked eye. Below the twinkling carpet of the sky, I could see the flickering fires of the camp below me and, in the distance, the headlights of cars parked up in the dunes.

As I stood there, feeling a million miles away from my everyday life, I was reminded of why Oman is a country unlike any other. Every trip to a new corner of the Sultanate is an eye opening experience, one in which I find that I learn more about myself, the natural world, people, and in this case, why you should always stay on a camel’s good side.
— [email protected]