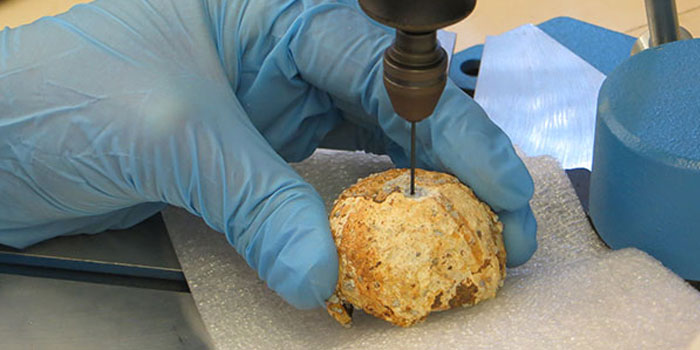 Muscat: Artefacts from the Esmerelda shipwreck has caused challenges to conservationists and researchers, said Heather Stewart, a restorations expert working on the project.
She noted that the artefacts have provided many challenges typically found in marine archaeological collections, such as the impact of salt water, their complicated treatment and unusual storage requirements.
In March, Oman’s Ministry of Heritage and Culture, in cooperation with Blue Water Recoveries Ltd, UK, announced the discovery and archaeological excavation of a sunken Portuguese East Indiaman ship that was part of Vasco da Gama’s 1502-1503 Armada to India. This was discussed on Saturday during Stewart’s lecture at The National Museum on Saturday, entitled “The Esmerelda Shipwreck: The Conservation of a Marine Archaeological Collection”. The lecture was part of Learning Centre’s lectures programme, which is sponsored by “BP Oman”, to support the centre’s activities. In her talk, Stewart referred to the importance of conservation as a discipline, which seeks to preserve artefacts within museums and archaeology.
The lecture offered an overview about the conservation of artefacts from the Esmerelda shipwreck, which sank in 1503 near Al Hallaniyat Island in the governorate of Dhofar, providing a rich collection of artefacts for archaeologists to study.
Stewart also discussed the ethics of conservation, related to the collection, and the difficulties found during the investigation of the marine artefacts.
Also, attendees had the chance to view pictures of the collection.
A selection of artefacts from the Esmeralda are on display at The National Museum, and the remainder are being examinedat the Ministry of Heritage and Culture.
The remains of the Portuguese shipwreck was located in the shallow waters of Ghubbat ar Rahib bay within a series of narrow interconnected gullies, which intersect with reefs that slope seaward from the shore.