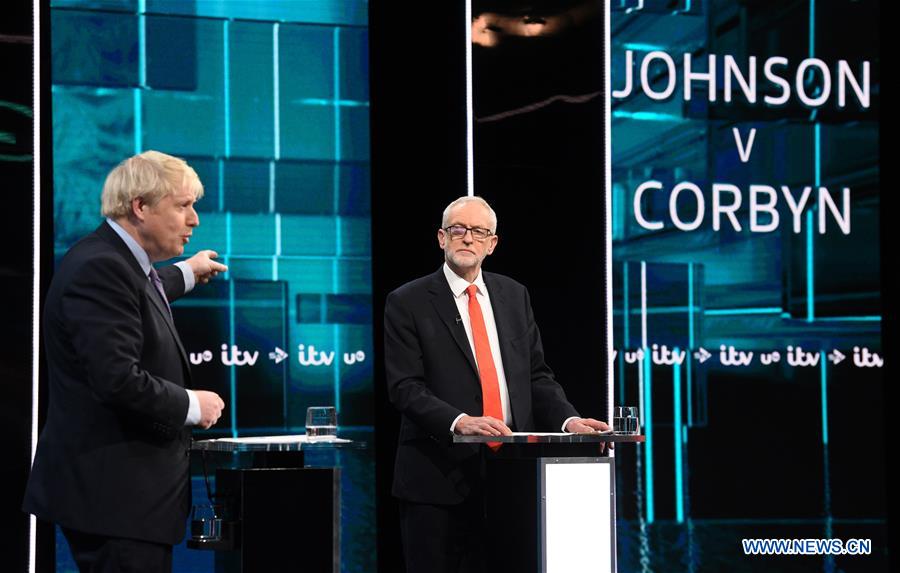 Just weeks before Britain's 46 million voters decide in the Dec. 12 general election who should run the country, the Conservative and Labour leaders both set out their visions of Britain in the 2020s.

Johnson said with a majority government he will end Britain's membership of the European Union (EU) at the end of January, with a new trade deal in place by the end of next year.

Corbyn, on the other hand, said Labour would negotiate a new deal with Brussels within three months of taking office and put it to the population of Britain within six months, with an option of remaining in the EU.

Johnson fired multiple questions at Corbyn over whether he would back remaining in the bloc, or leaving, criticising him for not answering.

A snap YouGov poll taken minutes after the 60-minute program put Johnson on 51 points with Corbyn on 49.

YouGov asked the people it surveyed to put aside their election preferences and judge the performances of the two leaders.

"But given the Conservatives went into this debate in the lead, they will hope the lack of a knockout blow means they can maintain this until voting day."

Topics in the debate ranged from climate change to the National Health Service (NHS) with Corbyn claiming Johnson's government would hand huge chunks of it to corporate bodies in the U.S..

The Guardian in London said Corbyn seemed to be getting the upper hand in the first half of the clash.

"His worst moment came when the audience laughed as he claimed his Brexit position was clear, but this did not seem quite as bad as Johnson's unconvincing claims to be someone who keeps his promises," the Guardian noted.

The Guardian commented that regardless of the YouGov verdict, Labour won't be disappointed with Corbyn's performance, while Johnson's Conservatives would be entitled to be relieved, "but certainly not overjoyed."

Labour is trailing the Conservatives by a large margin in most opinion polls.

Pressed by moderator Julie Etchingham, both leaders promised to improve the nature of debate if they become the prime minister after Dec. 12.

Her question was prompted by complaints of bitter and hostile wrangling that has been the hallmark of debates in the House of Commons during 2019.

Etchingham asked them both to make her call a pledge, and succeeding in getting the two leaders to shake hands.

The only light-hearted moment in the exchange came when the final question asked each leader what would they give to the other as a Christmas gift.

Corbyn said he would give Johnson a copy of the Charles Dickens classic book, A Christmas Carol. Johnson, in a nod to Corbyn's hobby of gardening and growing fruit, said he would gift the Labour leader a pot of damson jam.