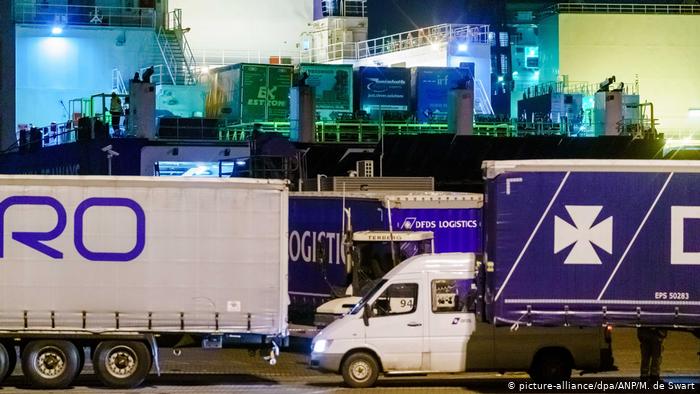 Authorities in the Netherlands discovered 25 migrants hidden inside a truck aboard a cargo ferry en route to Britain shortly after it left the country on Tuesday.

The Britannia Seaways ferry quickly turned back to the port of Vlaardingen, just outside of Rotterdam, emergency services said.

The origins of the migrants are not yet known. The ferry is owned by Danish operator DFDS and had planned to embark across the North Sea to Felixstowe, in southern England.

Gert Jakobsen, a spokesman for DFDS, told the DPA news agency that the migrants had to return to the Dutch port.

Most of the migrants are reportedly male. Two of them were taken to hospital for treatment and the other 23 received medical assessments in the port before police took them in for questioning, according to a report posted by regional emergency services.

Police told Dutch national broadcaster NOS that they had detained the driver for questioning over whether he involved in human trafficking. The truck has been confiscated.

Sniffer dogs searched the premises of the vessel on its return to Vlaardingen in case there were any further persons.

The discovery of the 25 migrants comes nearly a month after 39 bodies were found in the back of a refrigerated freight truck close to London in October. The lorry had originally left mainland Europe on a ferry from the port town of Zeebrugge, in Belgium. So far, two people have been charged in Britain and eight in Vietnam over the deaths.