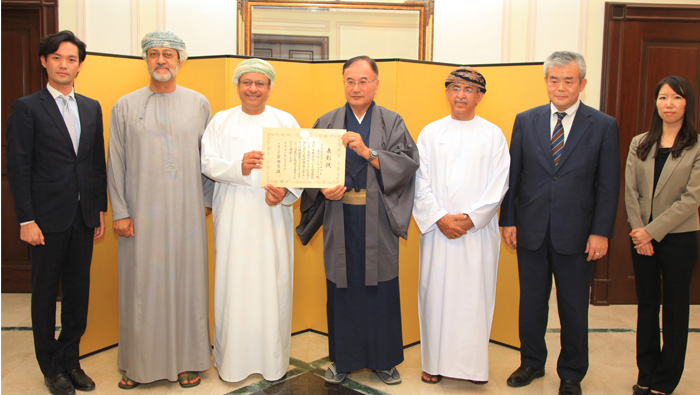 Muscat: Fumio Kishida, minister of foreign affairs of Japan, awarded the prestigious Japanese Foreign Minister’s Commendation for 2016 to Sheikh Mohammed Saud Bahwan, chairman of Saud Bahwan Group, in recognition of his contribution in promoting bilateral cultural relations and mutual understanding between Japan and the Sultanate.
The foreign minister’s commendation is awarded to a few individuals and groups all over the world with outstanding achievements in international fields, in order to acknowledge their contributions in promoting friendship between Japan and other countries. The commendation also aims to promote the understanding of the activities of the recipients to the Japanese public.
In 2010, Sheikh Mohammed Saud Bahwan was appointed as chairman of the board of directors for Oman Japan Friendship Association (OJFA), and has supported a number of cultural events to enhance the mutual understanding between two nations. Moreover, he was one of those who made efforts to collect contributions for Japan and its people after the Great East Japan Earthquake occurred on March 11, 2011 and led Oman to be the fourth biggest contributing country to Japan among the world at the time. He has also fully supported the OJFA Japanese language courses in recent years.
On this occasion, Mitsugu Saito, Japan’s ambassador to the Sultanate, hosted a commendation ceremony at his residence on November 22, in the presence of His Highness Sayyid Haitham bin Tariq Al Said, minister of heritage and culture and honourary chairman of Oman Japan Friendship Association, and Dr Ahmed bin Mohammed bin Obaid al Sa’eedi, minister of health, to express their appreciation and for the efforts made by Sheikh Mohammed Saud Bahwan and his continuous cooperation in promoting the mutual understanding between Japan and Oman.
Following the commendation ceremony, the Embassy of Japan held a book donation ceremony to donate more than 120 books, including Japanese textbooks and cultural books, to OJFA. The books were handed over from the ambassador of Japan to Sheikh Mohammed Saud Bahwan, the chairman of OJFA.