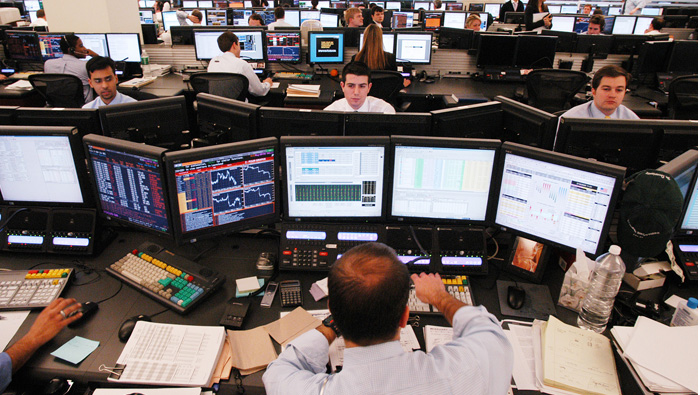 New York: Key stock indexes on Wall Street swept to record intraday and closing highs on Black Friday thanks to gains in consumer staple and technology shares, while European stocks climbed and a stabilisation in United States Treasury yields promoted investors to sell the dollar.
The Dow, S&P 500 and Nasdaq indexes, as well as the small cap Russell 2000, hit record closing and intraday highs in thin trading, with the US stock market closing. For the week, the Dow and Nasdaq gained 1.5 per cent, while the S&P 500 rose 1.4 per cent.
The S&P 500 consumer staples index's 0.8 per cent gain boosted shares on Black Friday, which traditionally kicks off the US holiday shopping season.
European stocks notched a third straight week of gains, even as a tumble in oil prices dragged commodities shares lower. Uncertainty over whether Orgaanisation of Petroleum Exporting Countries (Opec) will agree to cut production at the group's meeting next week weighed on crude prices.
Expectations that US President-elect Donald Trump's promises of tax cuts, higher infrastructure spending and reduced regulation would benefit certain industries, including banking, industrials and healthcare, have underpinned multiple recent all-time highs in US shares.
"While many stocks have risen quite briskly, investors are looking for some forgotten names in the rally," said Andre Bakhos, managing director at Janlyn Capital in Bernardsville, New Jersey. MSCI's all-country world equity index was last up 1.86 points, or 0.45 per cent, at 414.99.
The Dow Jones industrial average closed up 68.96 points, or 0.36 per cent, at 19,152.14. The S&P 500 ended up 8.63 points, or 0.39 per cent, at 2,213.35. The Nasdaq Composite closed up 18.24 points, or 0.34 per cent, at 5,398.92. Europe's broad FTSEurofirst 300 index closed up 0.29 percent at 1,351.66.
While positive for stocks, Trump's surprise victory in the Nov. 8 election has sent U.S. Treasury yields higher as investors bet his pro-growth and inflationary policies will erode the value of U.S. bonds.
The US Treasuries were last steady after two-year yields hit a six-and-a-half-year high of 1.17 per cent overnight as investors evaluated how much further the selloff had to run.
"There are a number of people that want to buy in but also don't want to get whipped by the next 25-to-30 basis point selloff," said Gennadiy Goldberg, an interest rate strategist at TD Securities in New York.
The dollar index, which measures the greenback against a basket of six major currencies, was last down 0.3 per cent at 101.430 as investors took advantage of the pullback in U.S. bond yields to lock in gains after the dollar hit a nearly 14-year peak on Thursday.
Despite Friday's steep losses, U.S. and benchmark Brent crude oil prices eked out a second straight week of gains. Brent crude settled down $1.76, or 3.59 per cent, at $47.24 a barrel. US crude settled down $1.90, or 3.96 per cent, at $46.06 a barrel.
Gold prices tumbled to a nine-and-a-half- month low of $1,171.2100 an ounce, partly on expectations of a US interest rate increase by the Federal Reserve next month. -