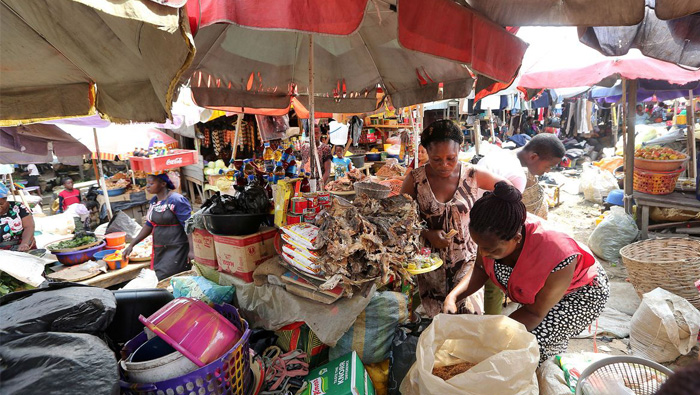 Lagos: Nigeria’s economic slump deepened in the third quarter as oil production continued to fall and factory output was hit by a shortage of dollars.
Gross domestic product in Africa’s most populous country contracted 2.2 per cent in the three months through September from a year earlier, after shrinking 2.1 per cent in the second quarter, the Abuja-based National Bureau of Statistics said in an e-mailed statement on Monday. The median of 15 economist estimates was for a 2 per cent contraction. The economy expanded a non-seasonally adjusted 9 per cent from the second quarter, the statistics office said.
Government revenue has plunged and foreign currency became more scarce with the decline of oil prices, the country’s main export, since mid-2014, and production fell as militants in the Niger River delta blew up pipelines.
The authorities have struggled to manage the economic fallout, at one point pegging the exchange rate against the dollar for more than a year and more recently using law enforcement to bring down the street price of foreign currency.
“The key drag on the economy remains issues around oil production,” Wale Okunrinboye, an analyst at Asset & Resource Management in Lagos, said in an e-mailed response to questions. “We do not think this reading is a trough for the economy and see downside to growth from a combination of continued militant attacks, depressed real wages and persisting dollar shortages.”
Crude production fell for the fourth consecutive quarter to 1.63 million barrels per day, from 1.69 million barrels in the three months through June, the statistics office said. The oil industry contracted by 22 per cent from a year earlier. The non-oil sector, which includes manufacturing, banking and agriculture, expanded 0.03 per cent. Factory output contracted 4.4 per cent, the third consecutive quarter of decline, and construction shrank 6.1 per cent, the fifth straight quarterly contraction.
Manufacturing was “affected by the foreign-exchange volatility and depreciation of the naira,” Damilola Akinbami, an analyst at Financial Derivatives in Lagos, said by phone. “We saw significant injection in construction, but there is a time lag between when something is implemented and when you see the impact, that’s why we didn’t see the impact in the third quarter.”
The slump in oil and shortages of foreign currency and power could cause the economy to shrink 1.7 per cent this year, according to the International Monetary Fund. That would be Nigeria’s first full-year contraction since 1991, according to data from the Washington-based lender.
Budget rejected
Nigeria’s Senate rejected the government’s spending plan for the next three years earlier this month because the proposals, which were meant to boost the economy, lacked details. Lawmakers also rejected President Muhammadu Buhari’s plan to borrow $30 billion abroad through 2018 on the same grounds.
The central bank removed its 197-199 naira per dollar peg on June 20, causing the currency to lose more than a third of its value.
The Monetary Policy Committee, which will announce its interest-rate decision on Tuesday, left the benchmark rate unchanged at a record-high 14 per cent in September to help prop up the naira and fight inflation, which quickened to an 11-year high of 18.3 per cent in October, even as the economic outlook deteriorated. All but two of the 18 economists in a survey forecast the MPC will keep the key rate unchanged.
While the third-quarter GDP data “will put pressure on the central bank as they meet, I don’t think it is going to change their stand as inflation remains very high,” Michael Famoroti, an economist at Lagos-based Vetiva Capital Management, said by phone. “Inflation is going to remain their focus, as well as the foreign-exchange market.” - Bloomberg News