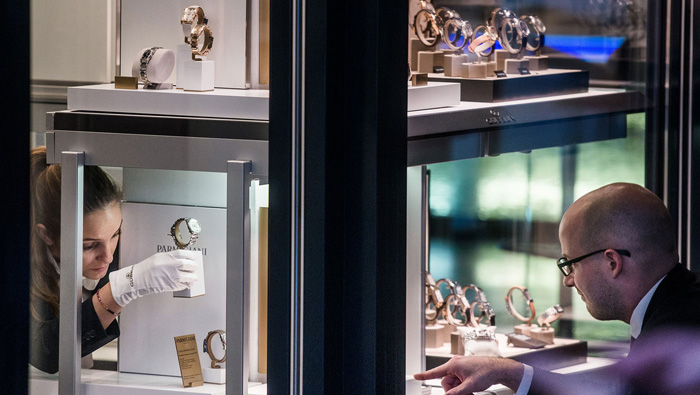 Geneva: Swiss Watch exports plunged 16 per cent in October, the biggest monthly drop in seven years, as demand weakened in almost every major market for Rolex and Omega timepieces.
Shipments fell to 1.68 billion francs ($1.7 billion), the Federation of the Swiss Watch Industry said in a statement on Tuesday. The decline was much greater than expected and was made worse because October was the weakest month of last year, according to Zuzanna Pusz, an analyst at Berenberg.
The longest slump in more than two decades is threatening employment in the Swiss watch industry, which had been riding a boom as rich Chinese bought more timepieces. Richemont plans to cut more than 200 positions at brands such as Vacheron Constantin, the Unia trade union said last week. That came after sweeping management changes at the Geneva-based luxury-goods maker, which eliminated the role of chief executive officer.
“Given the wide expectation of a rebound in the fourth quarter, the weaker October data is likely to be taken negatively for both Swatch and Richemont,” Berenberg’s Pusz said in a note.
Swatch shares fell 3.7 per cent to 285.3 Swiss francs in Zurich, while Richemont declined 2.5 per cent to 64.1 francs.
Exports have fallen 11 per cent in the first 10 months of the year 13 of top 15 markets were negative in October Shipments to Hong Kong, biggest market, fell 22 per cent vs 40 per cent in September Exports to United States declined 17 per cent UK posted 9 per cent gain as weaker pound drove sales; fourth monthly increase Average prices declining, federation says China posted 2.8 per cent gain, fourth month of recovery.