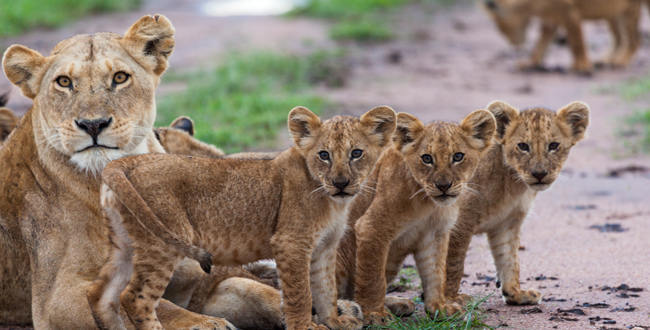 Almost all baby animals appear adorably cute to humans. Their big, innocent eyes and small, plump bodies make even the wildest of animals seem less aggressive.
Scientists have theorised that babies of all kinds pull at our heartstrings because we are instinctively programmed to protect human babies and that we empathise with infants of other species.
Domestic cat babies are called kittens. Kittens are born with their eyes closed. The eyes usually open about a week after birth. At first, kitten eyes are blue; their true eye colour will develop by about three months old.
Baby lions, leopards and tigers are called cubs. Lion cubs are vulnerable to predators such as hyenas and leopards, but other lions are the most dangerous of all.
Baby gorillas and other apes are called infants. Infant gorillas weigh about four pounds (1.8 kg) at birth.
Baby horses and zebras are called foals. Male foals are called colts; female foals are called fillies.
A baby mouse can be called a pup, pinkie or kitten. A baby owl is called an owlet. Baby spiders are called spiderlings.
Meerkat pups are born blind, deaf, and almost hairless. These tiny babies weigh about 0.9 to 1.3 ounces (25 to 36 grams) at birth. Baby frogs are called tadpoles.
It is rare for two hyena pups to survive, as the larger pup usually kills its littermate.
Newborn dogs are called pups or puppies. They are born blind, deaf and toothless.
Baby bears are called cubs. Polar bear cubs are born in snow dens. The den keeps them safe from predators and out of the elements.
—[email protected]