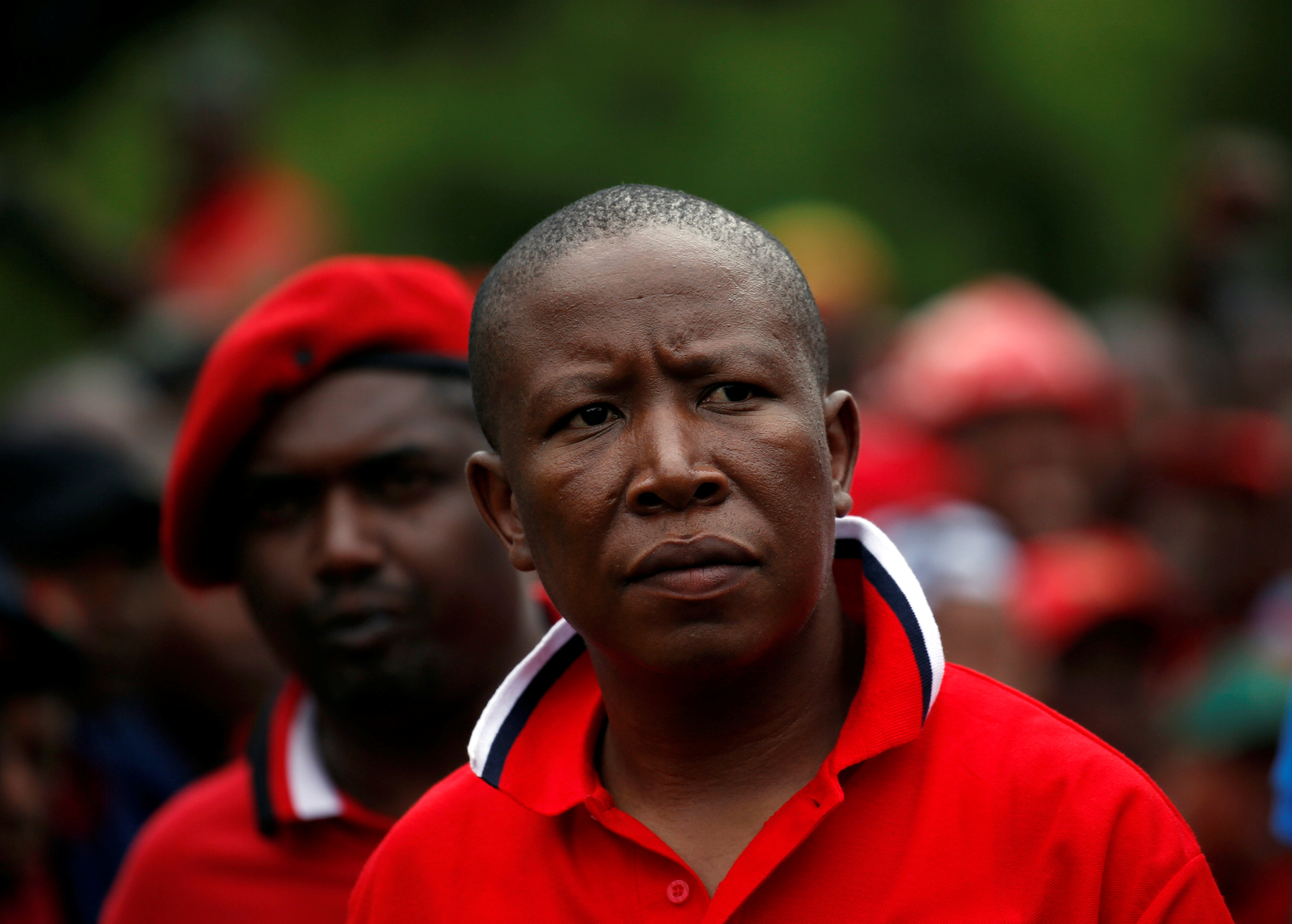 JOHANNESBURG: A far-left South African politician who wants to nationalise banks, mines and land said on Monday he would ask the Constitutional Court to scrap an apartheid-era law used to prosecute him over calls to occupy white-owned land.
Julius Malema, leader of the far-left Economic Freedom Fighters (EFF) party, won the permission of a judge to have his trial postponed while he challenges the 1956 Riotous Assemblies Act - a challenge legal experts said could well succeed.
Land reform is a highly sensitive issue in South Africa and has been brought into focus by the decline in agriculture in neighbouring Zimbabwe, where white commercial farmers were often evicted violently by President Robert Mugabe's government.
Malema, known for his fiery radical rhetoric, has accused the ruling African National Congress (ANC) of failing to redress the inequality between blacks and whites since the end of apartheid in 1994.
The former ANC Youth League leader has seen his political support rise in recent months by targeting his former patron, President Jacob Zuma, over various scandals.
Last week he led protests in the capital urging Zuma to resign. Malema, whose party holds 25 seats in South Africa's 400-member parliament, appeared in court on Monday in the town of Newcastle, in the KwaZulu-Natal province, where he is accused of urging his supporters in a speech in June to occupy white-owned land, in contravention of the 1956 Riotous Assemblies Act.
The judge granted Malema's request for a delay in his case. "What we are calling for is peaceful occupation of the land and we don't owe anyone an apology for that," Malema told cheering supporters wearing their trademark red shirts outside the courtroom after the hearing.
"If it means going to prison for telling people to take the land, so be it. I am not scared of prison," said Malema, who wore a dark blue suit and red tie instead of his usual red beret and red overall.
"The land must be expropriated without compensation," he said. "We are not calling for the slaughter of white people' at least for now," he added.
The main opposition Democratic Alliance party, which has many white supporters, condemned Malema's comments as "threatening" and "unconstitutional", but EFF spokesman Mbuyiseni Ndlozi said they were justified because he said the land in white hands had been acquired by killing black people.
"We are not saying our people should seek revenge, we hope to help bring land to blacks using peaceful means," Ndlozi said.
Ndlozi said Malema would challenge the 1956 law on the grounds that "it is unconstitutional and should be struck off".
Johannesburg-based lawyer Ulrich Roux, who has no connection to the politician's case, said the Constitutional Court might rule in favour of Malema as the law had originally been introduced by the apartheid regime to suppress dissent.
"It is a pretty unique application. The chances are pretty good that it could be declared unconstitutional," he said.
The judge in Newcastle said Malema's lawyers must provide proof to the court on December 7 that he has filed his case to overturn the trespass law with the Constitutional Court and that the politician must return to the court on May 5 next year.
Next Monday Malema will face a second charge of trespass in Bloemfontein, 400 km (250 miles) southwest of Johannesburg.
Malema's three-year-old party has won some support from voters frustrated about inequality in a country where black people make up about 80 percent of the 54 million population, yet most of the economy in terms of ownership of land and companies remains in the hands of white people, who represent about 8 percent of the population.