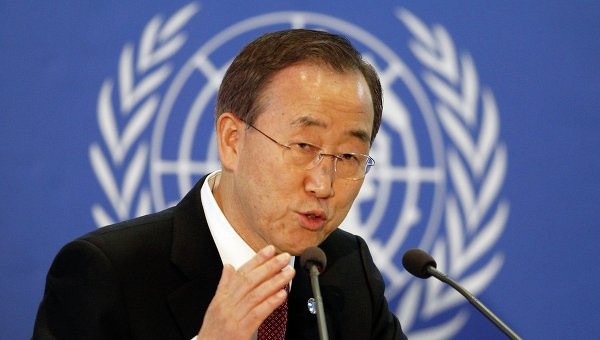 Switzerland: A deal to reunite the divided island of Cyprus is within reach, United Nations Secretary-General Ban Ki-moon said on Monday as he opened a round of talks in a snow-bound hotel overlooking Lake Geneva in Switzerland.
The five days of U.N.-led negotiations between Greek Cypriot President Nicos Anastasiades and his Turkish Cypriot counterpart Mustafa Akinci will concentrate on the question of territory "as well as all other outstanding issues interdependently", Ban said.
"The two leaders have expressed their hope that this meeting will pave the way for the last phase of the talks in line with their shared commitment to do their utmost in order to reach a settlement within 2016," he told reporters. "The prospect of a solution in Cyprus is within their reach. Expectations in both communities are high," he added, without taking questions about how the U.N. might try to steer the two sides to an agreement.
Cyprus's 800,000 Greek Cypriots and approximately 220,000 Turkish Cypriots live on the divided island with a U.N- patrolled ceasefire line splitting the island east to west. The island was split in a Turkish invasion in 1974 triggered by a brief Greek-inspired coup.
But friction between the two sides dates back at least a decade when Turkish Cypriots pulled out of a power-sharing government at perceived attempts by Greek Cypriots to limit their say. Anastasiades and Akinci are both moderates leading their respective communities and the negotiations are directed towards reuniting Cyprus as a loose federation of two constituent, largely self-governing states.
In addition to territorial swaps, Greek Cypriots who represent Cyprus in the European Union are adamant that a deal see the withdrawal of Turkish forces from the island. Thousands of Turkish troops are stationed in Cyprus's north, a breakaway Turkish Cypriot state recognised only by Ankara.