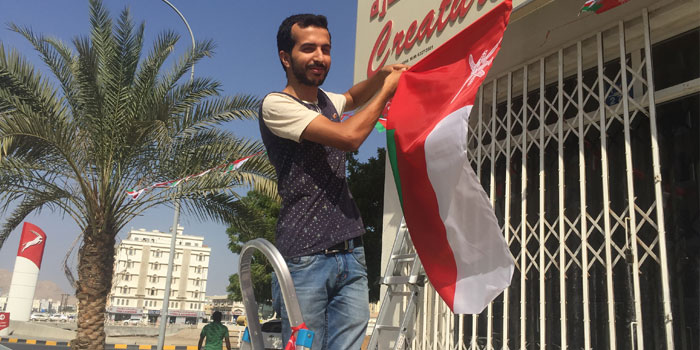 Muscat: Decorating cars for Oman’s National Day revelries this year would be cheaper, thanks to a slump in oil prices that has resulted in a slowdown in the car accessories market.
Digitally printed decorations for big vehicles that used to cost up to OMR350 per car can now cost less than half.
“Now it costs only OMR150 for big cars and around OMR80 for sedans,” Yasser, an Indian expatriate who supervises a number of car accessories shops in Muscat, said.
**media[534358]**
"Besides, the number of customers this year has also been less than it was last year," he added.
Normal stickers cost even less.
“We decorate an entire 4X4 vehicle for OMR80 and a sedan for just OMR50,” Mahmood, an Omani employee at a car shop, said as he showed a catalogue of designs the shop offered.
He explained that the increasing number of shops has made it a competitive field, and resulted in cheaper products. Others, however, blamed the rather “limited” timeframe for decorating cars without being fined.
On normal days, the Royal Oman Police fines drivers who put stickers on their cars. It allows such colourful decorations only for a couple of weeks in the month of November as part of the National Day commemoration activities.
“Fewer people are now decorating their cars because of the tough economic situation. Many think it is not worth spending OMR50 to celebrate for just two weeks,” an Arab seller of such stickers said, urging the government to extend such permission till year-end.
**media[534374]**
So far, he said, he had not received a single customer. “Earlier, we used to receive hundreds of such requests a month before the National Day,” he said, adding that his shop’s revenue has dropped by 45 per cent since 2015.
Wasim Iqbal, who works at Tiger Eyes Trading shop, seemed more optimistic. He said motorists were waiting for the police to announce permission for such decorations.
“They are more afraid of the police enforcing the law strictly but I am sure customers will come once the police gives the permission,” he hoped, though he had received just three customers in the entire last week.
“If a customer wants a specific design for his 4X4 car, we do it for OMR120,” he said. While a majority of his customers are Omanis, he said many Pakistani and Indian nationals also request for full car body decorations.
Most sellers said it takes around three hours to decorate one vehicle.
**media[534375]**
“Our most popular designs are those with a military theme, depicting a khanjar and the Omani flag,” Mahmood, who works for a local shop doing car decorations, said. He added that some drivers want to have certain designs not allowed by the police.
The Royal Oman Police announced on Sunday that celebratory stickers can be pasted between November 6 and 30.
However, the ROP made it clear that these should not be pasted on front, side or rear windows of the vehicle. “Also, these should not cover the number plate of the vehicle,” the ROP said in a tweet on its official twitter handle.
As for the pictures, slogans, colour and fabric, the ROP has cautioned that these should not violate ethical values professed by Oman or the country’s traffic safety norms.