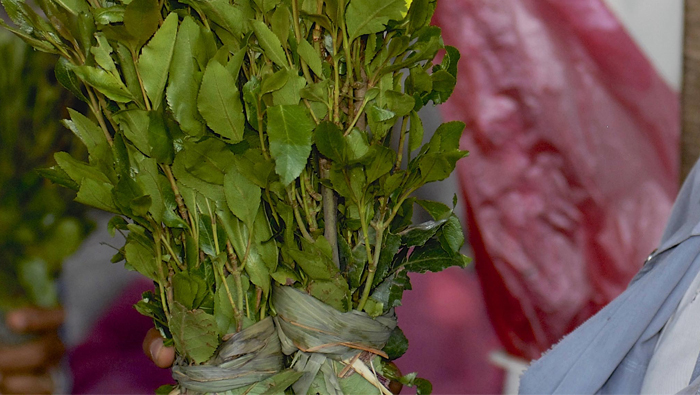 Muscat: Khat smugglers may face life sentences or the death penalty if they are caught by the Royal Oman Police, warned the Director General of Narcotics Control.
A senior official at the ROP said that there has been an increase in khat smuggling in the Sultanate and the warning comes in light of the rise.
According to the ROP, 27 cases were registered against 58 people involved in the khat trade since the beginning of the year until October 2016, and 10,240 bundles of the herbal high were seized. During the same period 18 smuggling attempts were foiled and 2,560 kilogrammes were seized.
Those numbers are up on last year, according to police, prompting the renewed warning that the death penalty is available in cases of smuggling.
Under the Narcotics and Psychotropic Substances Law issued by the ROP, khat smugglers and traders could suffer severe punishments which could go as far as being sentenced to life in prison or execution. There is also the option of a fine of OMR 50,000.
Khat users would also face up to three years in prison as well as a fine of up to OMR3,000.
The Director General of Narcotics Control, Colonel Abulrahim Qassim Al Farsi, said, “Using khat creates a health hazard and it is no less dangerous than any other drug which affects mental and physical health.
“These types of poisons give the illusion that the user is more active and it is nothing more than a synthetic feeling and far from reality. Khat users will feel lazy and drowsy as well as insomniac.”
He added that they will also be more moody, angry and hostile, especially towards relatives.
Impact on health
“There are many health effects from khat such as schizophrenia and sudden heart attacks from the rapid hard beats, as well as damaging the digestive system from prolonged usage in the mouth, lips, gums and tongue,” said Col. Al Farsi.
“Loss of appetite, liver infections, urinary tract infections and erectile dysfunction are among the effects. Health reports also suggest that mouth cancer can be a result of using khat,” added Col. Al Farsi.