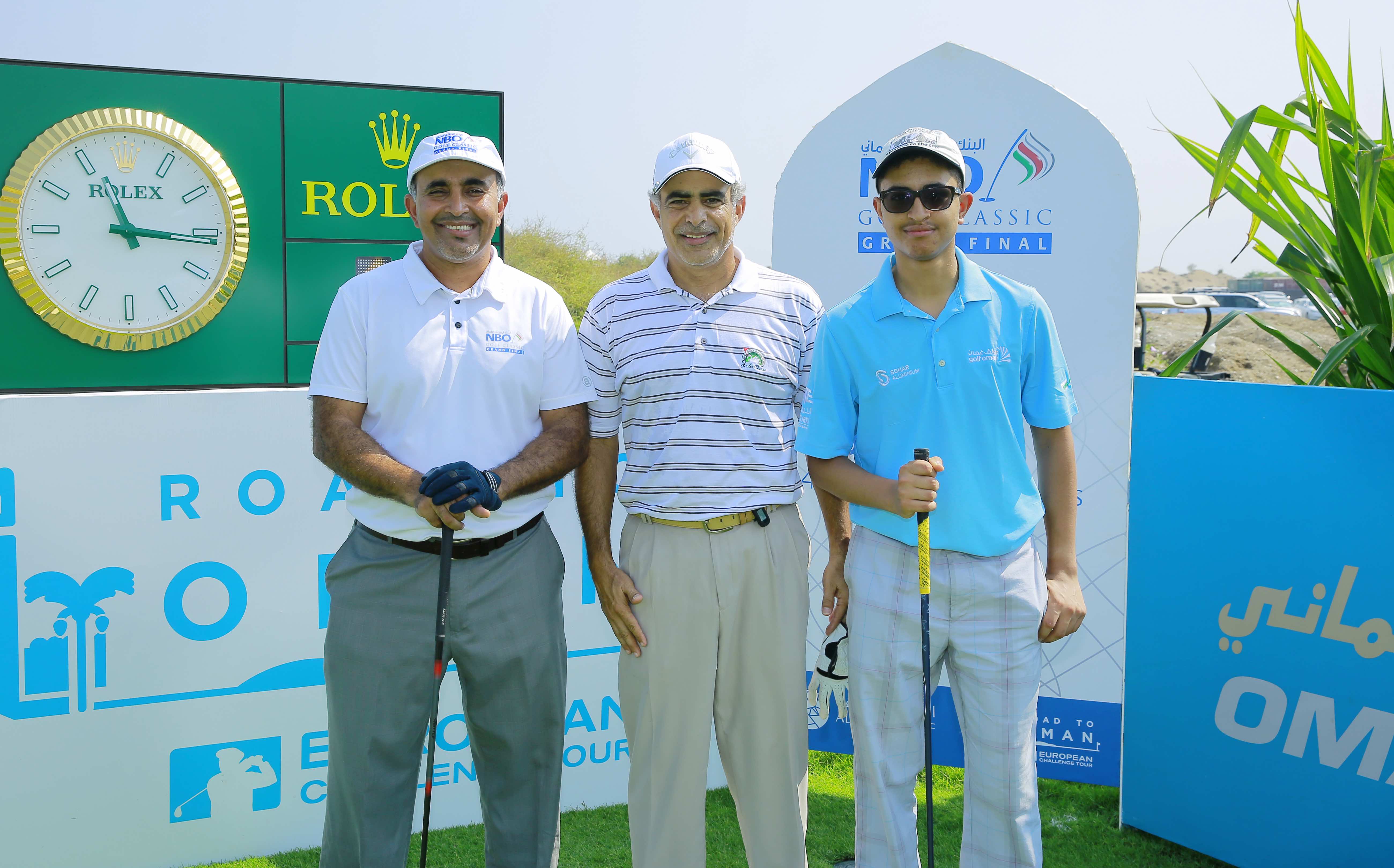 Muscat: Oman’s Minister of Oil and Gas Dr Mohammed bin Hamad Al Rumhy was a guest of honour on Friday at the NBO Golf Classic Grand Final, currently taking place at Almouj Golf in Muscat.
His Excellency was taking part in the final round of an amateur tournament for Omani players which has formed part the week’s schedule of events and after finishing his round on the same championship course that the Challenge Tour’s top 46 players are competing on, he revealed his optimism regarding the gradual growth of the sport in the Sultanate.
“The encouraging thing is seeing the number of young players, some of them as young as seven or eight showing an interest in golf in Oman now,” said the Oil and Gas Minister.
“Another very encouraging aspect is that we have a lot of local girls taking up the sport. I think golf really suits the local girls here. It’s a very private kind of sport and family orientated so I hope we’ll see more kids taking up the sport and competing with us. We’re trying to give them a good game but our days are numbered as they say!”
The NBO-sponsored tournament has been running at Al Mouj Golf since 2013, and was elevated in significance last year when it became the Challenge Tour’s season-ending grand finale, offering a prize fund of €400,000 and the opportunity for the top 16 players on the Road to Oman Rankings to earn promotion to play on next season’s European Tour.
“It’s very good of NBO to sponsor this event, we’re trying to bring big tournaments to Oman,” said Dr. Rumhy.
“It’s great to have corporate support, particularly for golf. It’s not only encouraging golf within the country it’s also a good advertisement for the country itself.
“Hopefully people outside Oman will see the country for the first time. Many people outside Oman don’t know about it and we want people to know where the country is on the map of golf and other sports, so we’re quite pleased with the role of NBO.”
His Excellency’s sons, Azaan and Hamed, are both keen golfers, with Azaan widely regarded as the country’s number one amateur, but it is the time the sport allows them to spend together as a family Dr Al Rumhy cherishes most.
“Golf has really served us as a family quite well,” said his Excellency. “We all used to play tennis but then we gave that up when my knees started to give up on running around the court. Luckily I got both of my sons to join me playing golf and we have a great time. Where else do you spend five hours with your kids these days?
“They grew up on golf courses and I think golf has helped me in raising my sons. Golfers are 99 per cent decent people. They speak well, they treat others well. The golf etiquette is something we like to see at home, so there are a lot of positives but people often don’t realise the role golf can play in raising your family.”
Ahmed Al Balushi won the Amateur tournament held on the sidelines of NBO Classic, while Ali Humaid and Amjad Al Tooqi came second and third respectively. The tournament was organised under the auspices of Dr Mohammed bin Hamad Al Rumhy and Mohammed bin Mahfoudh Al A'ardhi, chairman of NBO among other dignitaries at the Ras Al Hamra Club.
The tournament saw participation of 36 Omani players and the top 12 have qualified for the European challenge championship.
The top three will also participate in Bahrain International Tournament and will be handed all support by NBO. The fourth and fifth place of the Amateur event went t Fahd Al Kitani and Hussain Al Balushi, respectively.