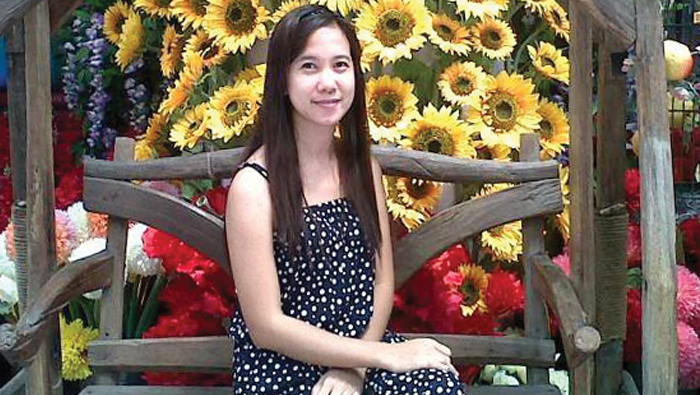 Muscat: Relatives and friends of Pinky Pamittan – the Filipina waitress who was sexually assaulted, murdered and dumped in a wadi in Muscat – have spoken of their heartbreak at news of her death.
Read here: Filipina expat body found, rape and murder suspected
Jemyca Cruz Pamittan, a cousin of Pinky, said: “We were devastated when we heard the news. We never imagined that something like this would ever happen to any member of our family. We are angry and sad at the same time because we can’t do anything except to support each other and pray for her soul.
“Whatever reasons they have to do this to her, it is unacceptable. It hurts to know what horrible things they did to her. My cousin is a kind and loving woman. She has a kid who waits for her to come back home alive, a husband who loves her and a family who adores her.
“I hope the Oman Government and the Philippine Embassy will do everything they can to catch all the suspects involved in this crime.”
Romelyn Lasic-Guillermo, another cousin of Pinky, said that the murdered hotel worker had gone to Oman to send money home to her family.
“Our family needs justice. We need help to resolve this as soon as possible. Pinky had a good heart. She went to work abroad to support the needs of her son in the Philippines. We are hopeful that justice will be delivered,” the cousin added.
Pinky, who was working as a waitress in a hotel in Qurum, had gone missing last week. Last Thursday the hotel management reported her missing at Baushar police station.
Police in Baushar launched an investigation and her body was found dumped in a wadi behind the Sultan Qaboos Grand Mosque on Friday.
“Initial reports suggest that she was kidnapped and raped,” the police told Times of Oman on Monday.
The police official also added that a number of men have been detained over the alleged sexual assault and murder of Pinky.
Precy Bautista Pamittan, younger sister of Pinky, who is still in shock, said: “I am crying...I can’t say anything right now.”
Speaking from her home in Amman, Jordan, Pinky’s mother Alice Pamittan, said she is coming to Oman to get details of her daughter’s death and the case against the accused.
She said that on Tuesday she will be approaching the Oman embassy in Amman to get a visa.
Pinky was about to celebrate her 32nd birthday on November 6.
“She was my good friend. We came to Oman together. It is shocking to hear about the tragedy. The culprits should be punished. She was a loving woman,” Ardee Saul, Pinky’s friend in Muscat, told Times of Oman.
An official at the hotel had told the Times of Oman that one of their employees was missing and that they had lodged a case with the police last Thursday.
Her stunned friends and relatives back home have called for support under the hashtag #JusticeforPinky on Facebook and other social networking sites.