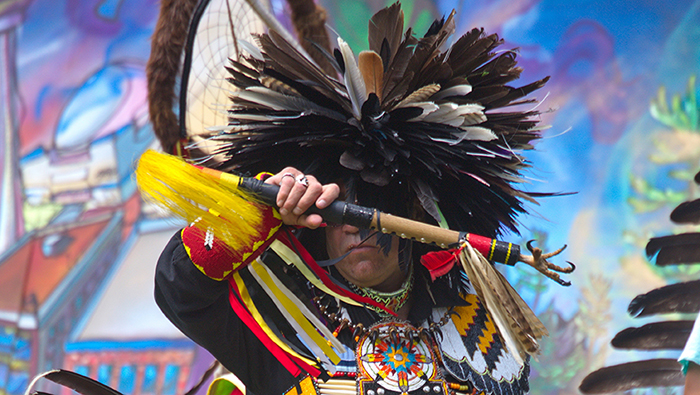 The Cherokee people share a proud and ancient history, culture and language. Despite adopting and adapting to many changes brought by European settlers, the Cherokee were forced to abandon their ancestral homes and move west on an 800-mile trek known today as the Trail of Tears.
What’s in a Name?
The Cherokee originally called themselves the Aniyunwiya (pronounced Ah-nee-yuhn-wee-yah) which translates as “true people” or “principal people.” The word “Chelokee” was the name given to the Aniyunwiya tribe by the Creek people. It means “people of a different speech.” The word “Chelokee” was mispronounced by Europeans and became “Cherokee.”
Language
The Cherokee language is called Tsalagi Gawonihisdi. It is related to the Iroquoian language. The Cherokee syllabary (a kind of alphabet) was invented by a Cherokee scholar and chief named Sequoyah (aka George Gist). The syllabary was developed between 1809 and 1824. It is estimated that by 1830, 90 per cent of Cherokee people could read and write in their own language.
Where on Earth
At one time, the Cherokee lived in the Great Lakes region of Ohio and Pennsylvania before moving south to the Appalachians. When Europeans arrived in the 1500s, the Cherokee were well-established in the Appalachian highlands, with 200 or more large towns in Virginia, Tennessee, North and South Carolina, Georgia, and Alabama.
Today, the Cherokee people are made up of three federally recognised bands. The Cherokee Nation, in Tahlequah, Oklahoma, has nearly 300,000 tribal members. Also in Tahlequah is the United Keetoowah Band of Cherokee Indians, with about 14,000 members. The third is the Eastern Band of Cherokee Indians, headquartered in Cherokee, North Carolina, with about 13,000 tribal members.
Did you Know?
November is Native American Heritage Month. This is when the United States officially celebrates the cultures and traditions of Native American people. The Cherokee Phoenix was the first newspaper published in the US by a Native American tribe and the first printed in a native language.
Cherokee women have worn many styles of clothing unique to their people, but the Cherokee tear dress is still worn as a traditional fashion statement. The tear dress was worn along the Trail of Tears. It was made of calico print material with appliqué diamonds.
Cherokee men traditionally wore a ribbon shirt of calico. A turban, also made from calico, is still worn by some men.
Cherokee men take part in the Celebrations of Traditions Pow Wow, an annual month-long Native American pow wow in San Antonio, Texas.
Cherokee baskets have been woven since prehistoric times. Traditionally, the women do this weaving. The principal materials used by the Cherokee are cane, white oak, hickory bark and honeysuckle.—[email protected]