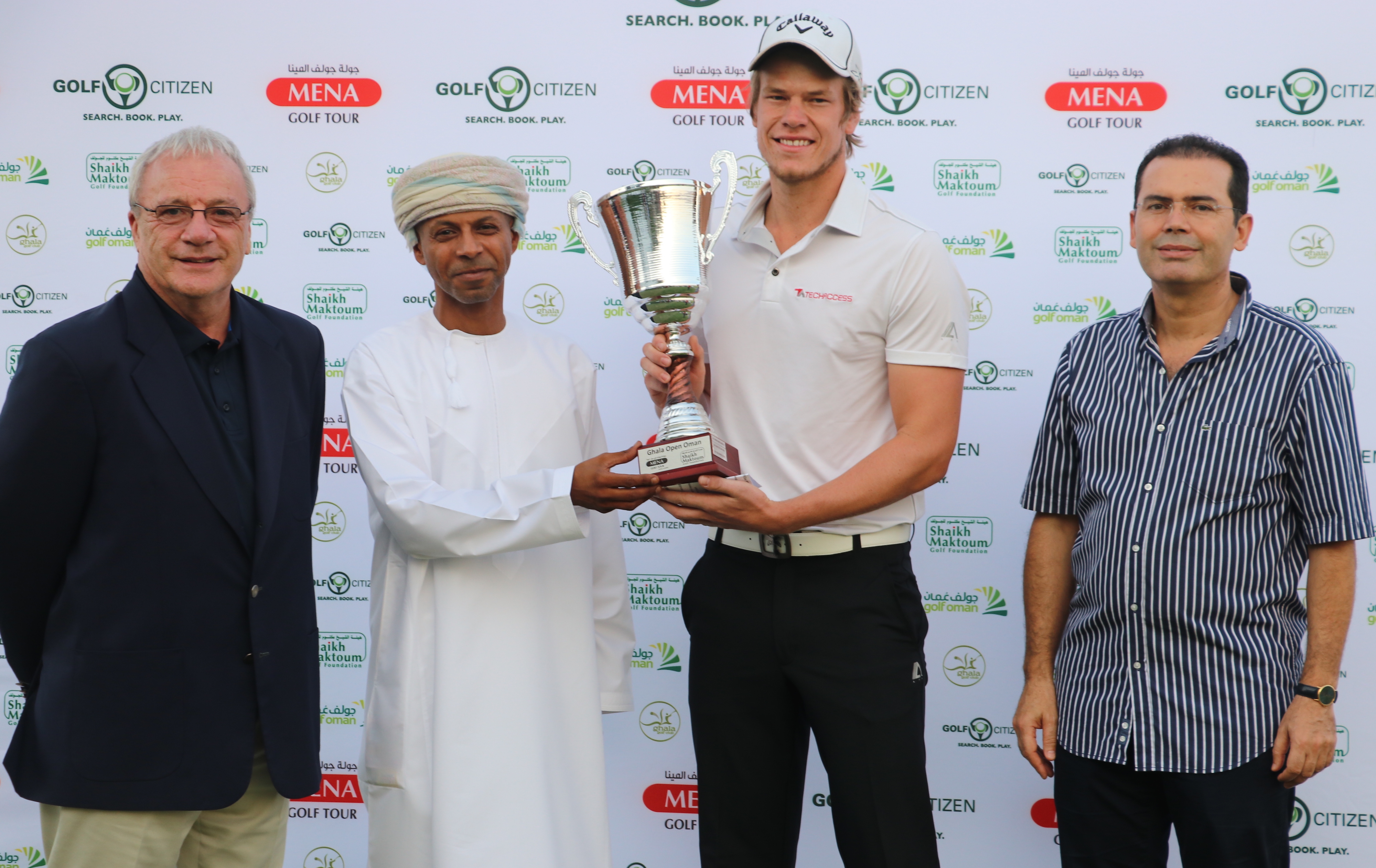 Muscat: Aaron Leitmannstetter overhauled a five-shot deficit to capture the Ghala Open in windy and dusty conditions for his maiden victory on the MENA Golf Tour on Wednesday.
The 23-year-old German closed with a superb six-under 66 to reach 10-under for the tournament, one clear of joint overnight leader Ahmed Marjan of Morocco as Sweden’s Fredrik From finished in solo third a further shot adrift.
Playing in the day’s sixth last group, Leitmannstetter reeled off seven birdies against a lone bogey to leave a strong field trailing in his wake as he become the first German to inscribe his name on a MENA Golf Trophy.
“It feels amazing to get the job done this time around after finishing second in this very tournament last year,” said the Dubai-based German after receiving the winner’s trophy from Ziyad Al Zubair, a board member of Ghala Golf Club, and Moroccan Ambassador to Oman Tariq El Hsissen.
“It was quite windy out there, I though a 10-under would be a good target and luckily I managed to achieve that. Very, very happy with my performance during the week,” said Leitmannstetter, who is playing in his third season on the MENA Golf Tour.
Morocco’s Marjan was left ruing shots that got away, especially on the 16th where he was sitting for an eagle, but three putted from 24 feet for par. A birdie on the closing hole could have forced a playoff, but he left it short from 15 feet.
“Yes, I had my chances, but couldn’t take them. Overall, very pleased to finish second. It was a good week and I can take many positives from this event. Almost every part of my game fell into place, it’s just that I couldn’t get over the line which is a shame.”
Chile’s Matias Calderon and the English duo of Benjamin David and Todd Clements shared the leading amateur award after the trio finished on matching five-under 211s.
“I really enjoyed playing for the first time on the MENA Golf Tour. The environment is pretty nice and healthy,” said Calderon, who closed with a 70, highlighted by an eagle on par-5, 13th when he smashed a five-iron from 220 yards to within 20 feet.
“I have learned a lot playing alongside many experienced players and hope the experience will come handy when I play the second stage of the European Tour Qualifying School in Spain next week,” said the 24-year-old prodigy who is based in Spain.
Saudi Arabia’s Khaled Attieh carded a two-under 70 to take the honours in the MENA Division for amateurs, beating his closest rival and fellow countryman Othman Almulla by a good four shots.
Tied for 50th overnight on three over, Thomas Bosco Cwiok made the biggest move of the day, shooting a sparkling 65 that matched the course record set by Morocco’s Marjan on Tuesday and catapulted him to joint 15th.
After making a birdie-bogey start, Cwiok found this rhythm and picked up four more shots before tuning in 32 and kept the momentum rolling all the way through, making three birdies on the back nine to post a creditable finish.
Among the notables, Andrew Marshall returned a final round 69 to finish in a tie for seventh on five under while his fellow Englishman Zane Scotland settled for tied 20th after closing with a 67 as defending champion Lee Corfield slipped to tied 42nd on four over 220.
The MENA Golf Tour will travel to Muscat Hills Golf and Country Club for the season-ending Tour Championship, starting from October 30.
Results:
1. Aaron Leitmannstetter (Germany) 10-under.
2. Ahmed Marjan (Morocco) 9-under.
3. Fredrik From (Sweden) 8-under.
Leading amateur: Benjamin David (England), Todd Clements (England), Matias Calderon (Chile) – all five-under.
MENA Division: Leading professional: Ahmed Marjan (Morocco), Leading amateur: Khaled Attieh (Saudi Arabia).