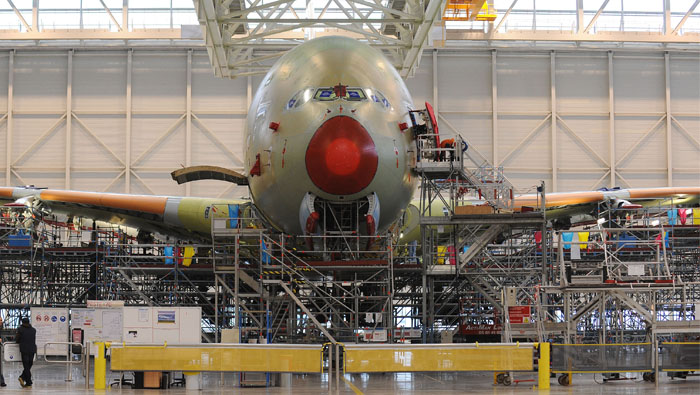 Toulouse: Airbus’ third-quarter profit tumbled 21 per cent as the jetliner manufacturer spent money addressing production delays to its latest wide-body model, fell behind on single-aisle deliveries and suffered a drop in helicopter sales.
Earnings before interest and tax excluding one-time items slumped to €731 million ($796 million) from €921 million a year earlier, Toulouse, France-based Airbus said in a statement Wednesday. Analysts had forecast a figure of €735 million, the average of eight estimates.
Airbus maintained its guidance for 12-month earnings matching 2015 level as it increases spending to achieve 50 A350 deliveries this year, having handed over just 26 in the first nine months as the wide-body was held back by issues with cabin fittings.
Chief executive officer Tom Enders is simplifying the company’s management and is poised to announce a round of job cuts as it scales back A380 superjumbo output and responds to lower helicopter sales.
“For the remaining months of the year we remain totally focused on deliveries to achieve our earnings and cash guidance,” Enders said in the release. Free cash flow excluding customer financing and receipts from disposals should also match last year’s figure, he reiterated, while an overall delivery target of more than 650 aircraft remains within reach and could extend to 670 jets.
“Everyone expected them to lower the guidance on free cash flow given the spending for the A350, so the fact that they’ve maintained it, just adjusting for financing, is a good thing,” said Yan Derocles, at analyst at Oddo Securities.
Seat shortage
Airbus took a charge of €385 million against the A350 in the second quarter and needs to hand over 24 planes in the final three months to make good on its full-year goal, though the company has ranks of complete aircraft waiting in Toulouse to be fitted with interiors before being sent to customers.
Handovers have been held up by a shortage of seats and lavatory cubicles from suppliers including Zodiac.
Problems involving Pratt & Whitney engines have also curbed deliveries of the revamped Neo version of the single-aisle A320, prompting Airbus to build more examples of the non-upgraded plane. The CFM International venture of General Electric and Safran also provides turbines for the new model but only began shipments mid-year. So-called “classic” A320s will now comprise 85 percent of deliveries this year rather than the planned 80 per cent.
Key customer Qatar Airways refused to take early Pratt-powered examples of the Neo because of cooling issues, and the engines remain in short supply even after tweaks to fix the glitch. Airbus Chief Financial Officer Harald Wilhelm said on a call that he expects Qatar to remain an A320neo customer, even though it placed an order for Boeing’s rival 737 Max model earlier this month, marking its first narrow-body deal with the United States company since 1979.
Copter woes
Earnings at Airbus’s helicopter arm slumped 17 per cent in the first nine months, hurt by a decrease in flying hours among operators as the lower price of crude prompts the oil and gas industry to rein in flights. The company said it’s still working on “transformation measures” for the unit, which it has said is likely to suffer job cuts.
Airbus said the A400M military transport program “remains challenging,” with customer negotiations on a revised delivery schedule yet to take place. The model has dogged the company for a decade, entering service five years late in 2013, killing four people in a crash in Spain last year and prompting a €1.03 billion charge against faulty gearboxes in the second quarter.