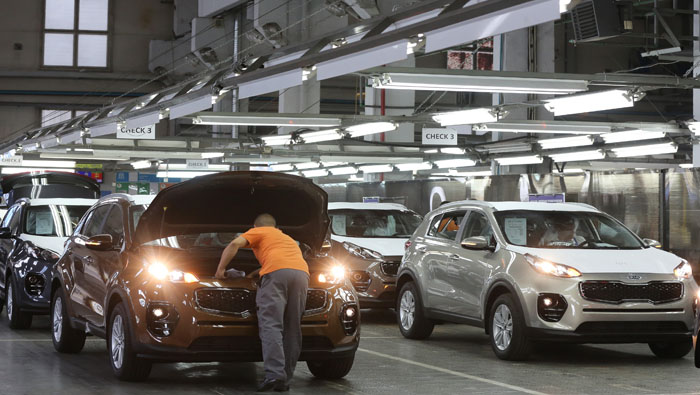 Seoul: Hyundai Motor, South Korea’s largest automaker, posted a drop in quarterly profit after labour strikes hurt domestic production and a stronger currency eroded repatriated earnings.
Operating profit declined 29 per cent to 1.07 trillion won ($943 million) in the three months ended September 30, the Seoul-based company said on Wednesday. That compares to the 1.22 trillion won average of 23 analysts’ estimates. Net income fell for a 11th consecutive quarter, also missing analysts estimates.
South Korea’s biggest automaker in September suffered its first full-scale strike in 12 years after a series of partial stoppages that started in July, before the union and management reached an agreement on wages this month. The disruption led to a production loss of about 140,000 cars valued at about 3 trillion won, while a stronger Korean won eroded overseas earnings.
"It may not be easy to achieve sales target this year,” Choi Byung-chul, Hyundai’s executive vice president, said on a conference call on Wednesday, referring to the deteriorating global conditions and impact of the labor strikes at home. "We will put all our efforts to overcome the situation in the fourth quarter.”
Sales target
The automaker, which had set a goal to sell 5.01 million vehicles this year, has delivered 3.54 million units in the first nine months, according to a regulatory filing. Hyundai expects to boost sales in the current quarter with the introduction of new models in its key markets, including the Verna Yuena sedan in China and Grandeur sedan at home, Vice President Koo Zayong said. The company will also increase exports of Genesis sedans and SUVs, Choi said.
Deliveries in South Korea declined 19 per cent. Sales in the United States, its second-biggest market, fell 12 per cent, while deliveries in China, its largest market, climbed 20 per cent. Net income fell 9.6 per cent to 1.06 trillion won, missing the 1.23 trillion won average of 23 analysts’ estimates, while revenue declined 5.7 per cent to 22.08 trillion won.
The labour strikes at Hyundai Motor that resulted in production loss is among factors that curbed South Korea’s economic growth in the quarter through September, Bank of Korea said on Tuesday. The nation’s gross domestic product expanded at a slower 2.7 per cent pace, compared with the 3.3 per cent growth in the previous three-month period.
The automaker’s executives will take a 10 per cent cut in wages from this month, given the difficult management situation at home and abroad, Hyundai said on Tuesday. Hyundai declined 1.1 per cent to 136,500 won in Seoul. The stock has declined 8.4 per cent this year, compared to a 2.5 per cent gain in the benchmark Kospi Index.
The won gained more than 7 per cent against the US dollar in the 12 months through September, eroding Hyundai’s competitiveness and lowering the value of repatriated earnings. Demand at home also waned after a tax cut on new car sales expired in June.