#OmanPride: Schools in Oman eager to participate in 'I Love the Sultan' campaign 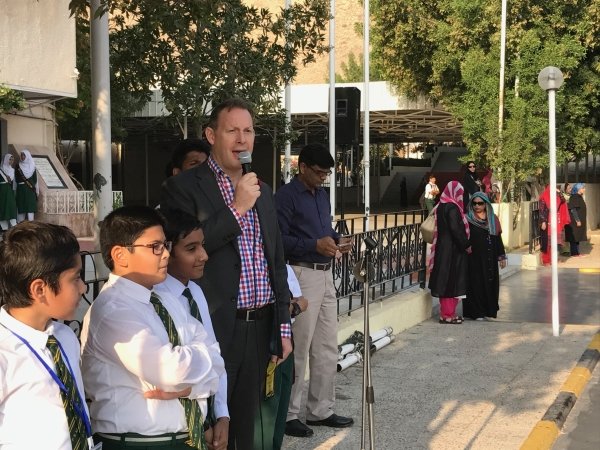 Muscat: With the Muscat Media Group’s (MMG’s) ‘I Love the Sultan’ campaign going full steam ahead, excitement is visibly growing as schools gear up to grab the highest honours.
Pakistan School Muscat (PSM) also decided to join the campaign on Tuesday, after the MMG team visited the largest Pakistan school in Oman to explain the initiative designed to pay tribute to His Majesty Sultan Qaboos bin Said on the country’s 46th National Day.
What started as a great way to register the nation’s love for its leader, has now become a full-fledged contest among schools as they compete to register their respect for His Majesty with the highest number of entries.
**media[524681]**
The MMG team was warmly welcomed at the morning assembly of PSM students who, interestingly, were being briefed on the importance of electronic and digital media and the edge it carried over its printed forms by a fellow student, by all means a quintessential new-generation tech-savvy smart young man. The school quite clearly seemed to prepare its students for the demands of today and trends of tomorrow.
Taking the cue, Richard Pakenham, chief sales officer at MMG, briefed over 1,200 students of the senior block on the importance of this digital campaign, inviting them to participate in big numbers.
**media[524679]**
“This campaign gives you all a wonderful opportunity to show your love for the Sultan, who has laid special focus to the welfare of children in Oman. All the students, parents and teachers will be proud of the fact that they were part of the giant portrait of His Majesty being created with the names of the participants,” he added.
Visibly moved by the unique initiative and the digital route to its creation, the students showed enthusiasm and keenness in participating with their family and friends.
“We will participate in this campaign wholeheartedly to register our love for His Majesty Sultan Qaboos bin Said, who is a role model for both the Omani and expatriate population of Oman,” said Atta Ullah Niazi, senior principal, Pakistan Schools System (PSS), which governs all Pakistan schools in Oman.
**media[524680]**
PSM Principal Khalid Jadoon and Munazza Ghafoor, principal junior section, were also present. PSM is home to nearly 2500 students and over 100 teachers.
Team MMG will promote the event at all schools in the capital, where it will encourage students to bring in more people to register for this massive campaign.
MMG will also hand out bookmarks to individual class teachers, which explains the registration process. Towards the end of the campaign, the class that has the highest number of entries will be rewarded with a dinner for 150 people at a leading restaurant in Muscat.
Those who register will also be entered into the biggest-ever prize draw organised by MMG, in which OMR25,000 worth of gifts can be won.