A journey from Muscat to magical Istanbul 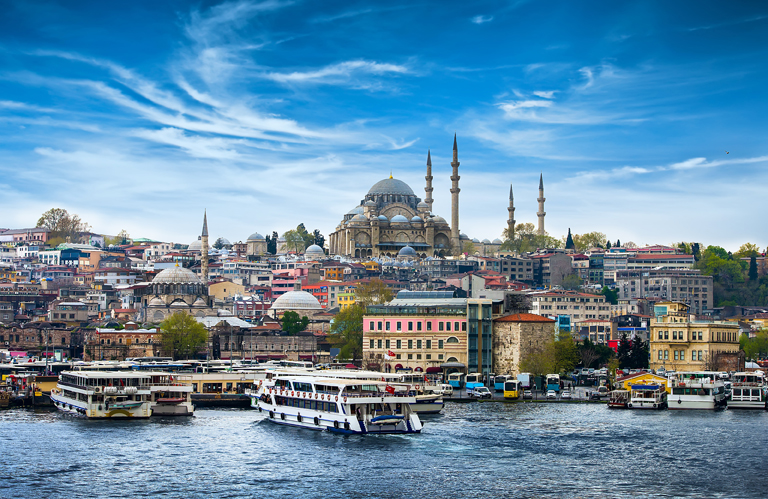 With enchanting night cruises on the Bosphorus, exquisite palaces which once housed the great Sultans of the Ottoman dynasty, magnificent mosques offering peace and solace, timeless bazaars to lose yourself, fashion that can take over the world, scrumptious food you can crave for ever, and a culture which blends the east and the west, Istanbul offers visitors opportunities which they can’t let go.

It’s 9.30pm on a slightly breezy night in August and we are moving on the pitch black waters of the Bosphorus, which only reflects the moonlight and decorative bulbs from our cruise boat, but is our cruise boat the only one on this famous river? Certainly not, the pitch black river is well lit with reflections from tens of other cruise boats which are all out and about on this celebrated stream, teeming with tourists from all over who have come to explore one of the richest cultures of the world.

Istanbul has been my dream destination for years, however every time I planned to travel there, I failed. It was a love affair for all these years, without even physically visiting, and when I was finally able to make it, the city turned out to be much better than what I had expected.

Istanbul, built on seven hills, is a magical place, and I am sure those who have visited, will agree with me. It’s got the best of both the worlds in terms of culture, tourist spots, heritage, and to top it all — food.
My visit to the gorgeous city was a media trip organised by Turkish Airlines for four days and things planned ahead. Seeing familiar names on the agenda like the Hagia Sophia, Sultan Ahmet Mosque, Bosphorus, and Taksim Square got me all excited but then there were places on this list I was not familiar with, such as Istiklal Street, Topkapi Palace, Dolmabahçe Palace, and a few others, which got me curious.

The adrenaline kicked in me when I left the Muscat International Airport by a Turkish Airlines night flight. Their comfortable business class seats got me drowsy in no time and although I tried to sleep, it was in vain.

It was perhaps the excitement of seeing the place I loved so much that kept me awake all through. Most of the journey in the five-hours-ten minutes long flight was quite uneventful, except the breakfast, which was served in a truly 5-star manner. We landed at the popular Istanbul Atatürk Airport, and got out to a most dazzling morning. The hotel we were booked in was called the Vialand Palace, my home for the next four days. Nestled on an elevation overlooking Alibeyköy Eyup in the city of Istanbul, the view from the hotel was truly enchanting, especially at night, when all the lights went on. Vialand Palace was a massive hotel spread over a large area with an open air shopping mall on its terrace and a large theme park called Vialand theme and amusement park, in its premises. The rooms too were really large and spacious, almost like a mini-suite.

Our first day highlight was the Dolmabahçe Palace, built in 19th century.

Overlooking the Bosphorus, it’s one of the most glamorous palaces in the world with a lot of the items inside plated in gold. Its walls adorned rich tapestry and the palace also showcased gifts given by leaders from other countries to the Ottomans. The palace was the administrative centre of the late Ottoman Empire with the last of the Sultans residing there, including Mustafa Kemal Ataturk, the founder of modern Turkey.

That afternoon we had lunch at this plush restaurant called NişantaşıBaşköşe, which was started in 2002, and located in an upscale area of Istanbul. It was hosted by Helen Holidays, one of the biggest and most popular tour operators in Turkey.

Across the street I saw stores of Karen Millen, Ted Baker, Juicy Couture, and Karl Lagerfeld, among others. Getting back to the food, there were some mouthwatering items on the menu — we had Pastırmalı Hummus, which is hummus topped with pastrami and virgin olive oil hummus, Yoğurtlupatlıcansilkme, roasted eggplant marinated with homemade yoghurt, virgin olive oil and green peppers, with shawarma platters, and kebabs accompanied with some deliciously soft Turkish flatbread. For dessert there were sweets made of pumpkin, which I totally loved.

After that sumptuous lunch, we went for a short stroll around the area on Maçkastreet, where I saw passersby flaunt some phenomenal fashion sense.

Most restaurants had outdoor seating areas which were full of diners, the sky was overcast, and the breezy wind made our walk even more pleasurable. Despite the scores of people there, time almost came to a standstill for me, it was beautiful. We also visited the celebrated Taksim Square and wandered around the alleys of Istiklal Street, where shops and restaurants are found at every step. Some restaurants almost seemed hidden, but when the curtain was lifted, they turned out to be massive, ancient looking eateries with scores of people talking, laughing and dining.

By that evening we were taken on a ‘Turkish night’ cruise by the Pereme Tours company over the Bosphorus, perhaps one of my most memorable experiences in Istanbul, where we got to see some rich traditional performances from the times of the Ottoman empire, including the popular ‘whirling dervishes’.

My favourite part of the cruise was the fact that we passed the famous bridges over the Bosphorus, and got to look at them in all their glory — the Bosphorus Bridge, Fatih Sultan Mehmet Bridge, and the Yavuz Sultan Selim Bridge.

Over the next few days we cruised the Bosphorus river a couple of times, went to the Egyptian bazaar, which was originally a traditional marketplace for spices. However, in today’s times you would find many other items – including souvenirs, traditional sweets, handmade cosmetics, clothes, and you name it.

Our highlight for day two was the Sultan Ahmet Square, which housed the Sultan Ahmet or the Blue Mosque, the Hagia Sophia Museum, and the Topkapi Palace. Just a tip, if you are not used to walking, you need to prepare yourself for that, because there are many places in Istanbul where you can’t take a car.

I had heard a lot about the Sultan Ahmet Mosque and seeing the wonder before my eyes was a dream come true. A grand and imposing structure, with several domes and minarets that made me wonder about the time taken to capture those intricate details in its building.

We were told that Istanbul had over 3,000 mosques, and an amazing aspect that we were informed of was that the ‘call to prayer’ in the mosques was recited in a rhythmic style, depending on the time of the prayer. No wonder it sounded so beautiful and soothing to the ears.

Another highlight in the square was the Topkapi Palace, which had housed many of the premier Sultans of the Ottoman period.

Apart from that however, there are many things to see in that complex, including the royal kitchen, the seven museums which showcase artefacts from the Islamic era including some of the items which belonged to Prophet Muhammad (Peace Be Upon Him).

In the same complex was the Hagia Sophia, perhaps one of the most popular landmarks in the world, known by many as a mosque church, or a museum.

The Hagia Sophia or Aya Sophia, as its pronounced, was apparently built as a church, which was later converted to a mosque during the Ottoman times. However, when Mustafa Kemal Ataturk came to power, he ordered for the Hagia Sophia to be converted to a museum. It is a striking monument, especially when you look at it from the outside. At the inside you would see a true reflection of modern day Istanbul, which encapsulates two continents of Europe and Asia, likewise when you walk in the Hagia Sophia, you can see high on the walls, a picture of Mother Mary is placed between two large round plaques saying ‘Allah’ and ‘Mohammed’ in Arabic, referring to the Islamic God and his messenger, the Prophet Muhammad (Peace Be Upon Him).

After that nostalgic trip, we had dinner at the Raffles Istanbul, a super luxury hotel with a stunning view of the surrounding area. The hotel complex also included a huge shopping area with some open space, where you could find some of the most expensive brands of the world, including an official Apple store.

I think a final highlight of our tour was the cruise trip to Princess Island, one of the most visited islands, especially flocked with Arab tourists. Being there was like getting a taste of a fishing or farming village with just a lot of tourists pouring in from everywhere. There I tried fresh ice cream in colourful cornetto cones. I also saw horse driven carriages, and small scooters which were abundant on the island.

I do have to mention that later that day we went to explore the theme park which was in the same premises as our hotel, and for the first time, I went on a roller coaster that ran at 110km/hr and also turned us upside down at one point, which is why I had my eyes closed all through.

Istanbul has a strong public transportation system with a metro, tram service, taxis, and buses, so you would never find it difficult to move around. There are tons of hotels including ultra luxury, luxury, standard, and budget hotels and accommodations which would suit just any pocket.

Towards the end of our four-day trip, it was hard to say goodbye to the city which has a special place in my heart - the Constantinople of the Byzantine era and Istanbul of the Ottomans, but then I had explored a lot of it and I will definitely go back whenever I can get some time off. Istanbul is a cultural delight, a foodie’s paradise, a traveller’s best respite and a storyteller’s ecstasy. It’s a place, the only in the world where two cultures converge, and two continents meet, offering visitors best of both the worlds. —[email protected]