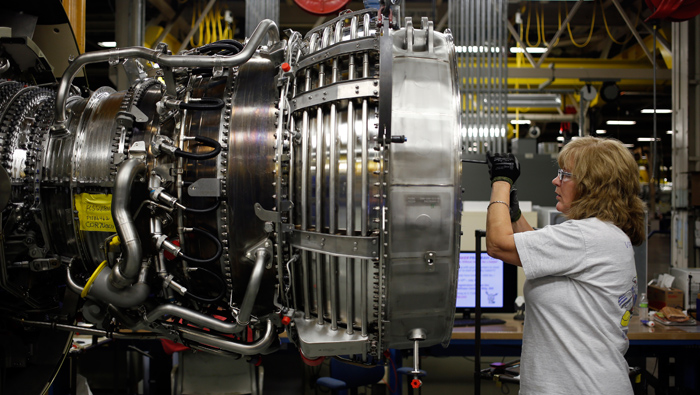 New York: General Electric (GE) cut its 2016 forecast for organic sales growth as the industrial giant grapples with a sluggish global economy that’s crimping demand.
Revenue on that basis will be flat to up 2 per cent this year, down from an earlier projection of 2 per cent to 4 per cent growth, GE said on Friday in a statement. The Boston-based company also narrowed its earnings outlook to $1.48 to $1.52 a share. It previously forecast $1.45 to $1.55.
A "slow-growth, volatile environment” is generating headwinds, chief executive officer Jeffrey Immelt said in the statement. GE said foreign exchange effects will hurt earnings by as much as 6 cents a share this year.
The revised forecast, following similar reductions by some peers, threatens to take the punch out of the industrial giant’s transformation. GE has shed finance and consumer-focused operations while investing in equipment manufacturing and building a complementary software business.
The shares fell less than 1 per cent to $28.80 in New York before the start of regular trading. GE declined 6.7 percent this year through Thursday, compared with a 4.8 per cent rise in the Standard & Poor’s 500 Index.
Earnings beat
Third-quarter adjusted earnings rose to 32 cents a share, topping the 30-cent average of analysts’ estimates. Sales climbed 4.4 per cent to $29.3 billion, compared to an average prediction of $29.6 billion.
Orders increased 16 per cent as GE looked to pad its backlog and recover from a weak first half. The figure fell 6 per cent on an organic basis, which excludes the effects of acquisitions and currency exchange.
The order tally was "a little bit better,” but GE has struggled to generate growth this year, Karen Ubelhart, an analyst at Bloomberg Intelligence, said on Bloomberg Television. Given the first-half results, trimming the organic revenue forecast makes sense, she said.
Sales in the oil and gas unit fell 25 per cent in the quarter, the most in the company’s industrial divisions, as GE navigated the enduring slump in the global crude market. Revenue climbed 37 per cent in the power division and increased 5 per cent in GE Aviation.
Digital and software orders rose 11 per cent, GE said. The company sees software operations as a business that can enhance the value and productivity of industrial equipment.
Small deals
GE on Friday boosted its share buyback to about $22 billion from $18 billion. The company has also pursued several small acquisitions in recent months to bolster its digital business, supply chain and manufacturing capabilities. The company said last week it would buy LM Wind Power, a maker of turbine blades, for $1.65 billion.
GE also is seeking shareholder approval to buy a pair of 3-D printer companies, Sweden’s Arcam and Germany’s SLM Solutions, for a combined $1.4 billion. GE said on Friday that it wouldn’t raise its price for SLM after shareholder Elliott Management Corp., the hedge fund founded by billionaire Paul Singer, called the terms unacceptable.
During the quarter, the 124-year-old company relocated its headquarters to Boston from a longtime suburban home in Fairfield, Connecticut, a move intended to bolster its image as a tech-savvy firm and help recruit engineering talent.