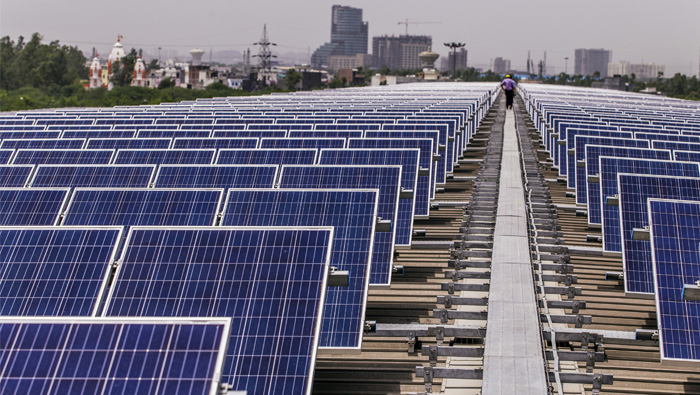 New Delhi: Prime Minister Narendra Modi’s government is planning a Rs210 billion ($3.1 billion) package of state aid for India’s solar panel manufacturing industry, according to two officials.
The so-called Prayas initiative, short for ‘Pradhan Mantri Yojana for Augmenting Solar Manufacturing’, a central-government plan designed to lift India’s installed photovoltaic capacity as well as to create an export industry, according to two senior government officials with direct knowledge of the plan. They asked not to be identified because the policy isn’t yet public.
Modi wants to raise renewable capacity to 175 gigawatts by 2022 from 45 gigawatts at present. In addition to meeting its own energy targets, which Bloomberg New Energy Finance estimates may cost $200 billion, India wants to emulate industrial developments in neighbouring China, where solar manufacturers have created a world-leading export industry.
The Prayas programme, part of Modi’s ‘Make in India’ campaign, is intended to create 5 gigawatts of photovoltaic manufacturing capacity from 2019 and build 20 gigawatts of projects in the country by 2026, according to the officials.
The policy, which is being developed by the ministry in charge of renewable energy and industrial policy, along with the Niti Aayog government research group, will be presented to the Finance Ministry within a month before going to the cabinet for final approval, they said.
Catching China
Last month Power Minister Piyush Goyal said in Mumbai that a policy to encourage domestic manufacturing of solar equipment is in works. When reached on phone, the spokesman for the power and renewable energy ministries declined to comment.
India has become one of the biggest clients of Chinese photovoltaic manufacturers and in the absence of its own domestic capacity, that reliance could potentially grow. In the first six months of 2016, India imported 18 percent of China’s production worth $1.1 billion, according to Bloomberg New Energy Finance.
India’s policy proposal, expected to create thousands of jobs, is also in response to the industry’s demand for help to the country’s solar manufacturers, one official said, adding that multiple tenders of a few hundred megawatts each would be issued for the manufacture of everything from wafers to modules.
Price advantage
The government could offer about Rs9 million a megawatt for manufacturing tenders and 5 million rupees a megawatt for local deployment, according to one of the officials, who said the numbers are subject to change.
The plan “might give a price advantage” if the manufacturing-hub logistics are “well planned,” according to Bloomberg New Energy Finance analyst Jenny Chase. Money alone isn’t a sufficient incentive for companies to set up the most high-tech automated factories needed to compete, she said.
Japan’s SoftBank said last month it’s considering a manufacturing joint venture in India that could produce the solar panels needed to meet Modi’s energy targets.
“To build large-scale manufacturing efficiency matching Chinese economics of scale will require government support,” Manoj Kohli, executive chairman of SB Energy said in an interview in New Delhi. He described Indian support policies in an “evolution stage.”