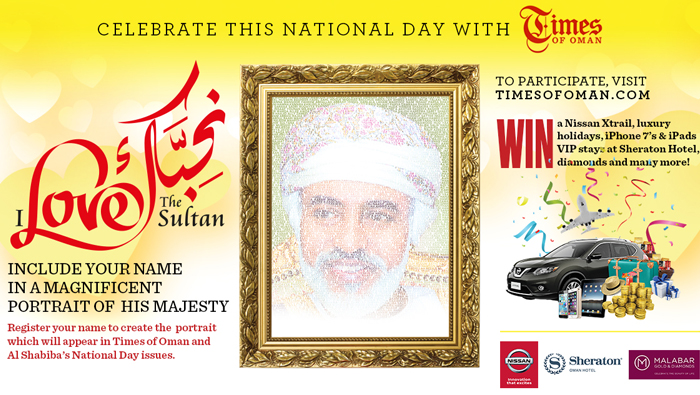 Muscat: Times of Oman’s exciting ‘I Love the Sultan’ campaign has scored the backing of the Oman Football Association (OFA).
The campaign, which will see tens of thousands of signatures of Omanis and expatriates alike to create a portrait of His Majesty Sultan Qaboos bin Said in honour of the 46th National Day, has been launched by Times of Oman and its Arabic sister title Al Shabiba.
Click here to register and win amazing prizes from Times of Oman
Muscat Media Group (MMG) is the OFA’s official media partner and both titles have been running the promotion which gives anyone registering the chance to win some great prizes, and the OFA is keen for all the football lovers in Oman to support the promotion.
Also read: More than 28,000 people in Oman register their names for His Majesty's portrait
OFA General Secretary Sultan Al Zadjali commented, “It is great that Muscat Media Group has come up with this campaign, and as the sport of the Nation, we are very happy to show our support.
Anything to show the love that the country has for His Majesty the Sultan. We will be encouraging all our clubs, players, teams and fans to sign up and create the biggest Mural that Oman has ever seen. Our thanks go to our Media partner and to all who follow and love football in Oman.”
To sign up for the Mural (and to enter the competition to win prizes), fans of football simply need to head to the dedicated website - timesofoman.com/extra/ilovethesultan/
Anyone who registers will also be entered into the biggest-ever prize draw from Muscat Media Group (MMG) with Omr25,000 of gifts to be won.
These include a brand new Nissan Xtrail, diamonds, several iPhone7s, a luxury family holiday thanks to the major sponsorship partners including Suhail Bahwan automobile, Malabar Gold & Diamonds and Sheraton Oman hotel.
The OFA will be offering some extra prizes to those who register and will be supporting the promotion across their social media pages.