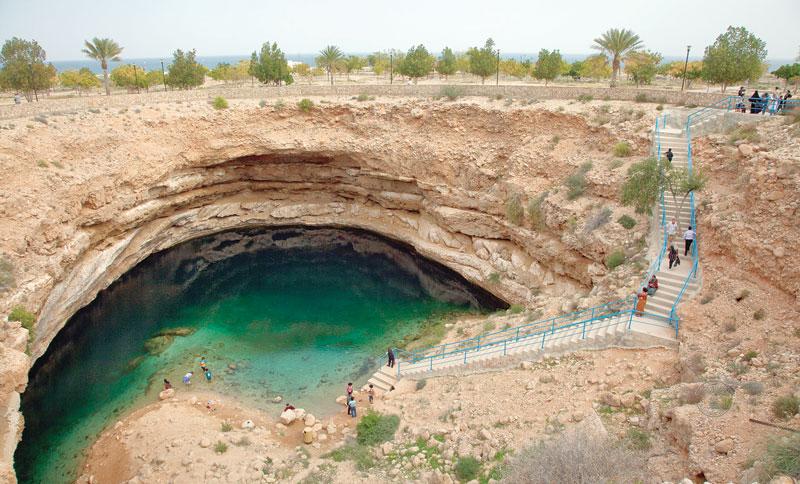 Quriyat: Oman has considerable tourism potential with many parks spread across the country.
The authorities have initiated the development of these parks and many utilities needed by visitors from both inside or outside the Sultanate.
The Hawyat Najm Park in the Wilayat of Quriyat in the Governorate of Muscat is one of the most important coastal parks in the Sultanate, and a tourist attraction.
The park can be reached from the city of Muscat through the dual-carriageway Al Amerat– Quriyat–Sur, linking the Wilayat of Al Amerat and the Wilayat of Quriyat. The distance from the Wilayat of Al Amerat to the park is about 140km.
When visitors reach the park, they can see how it is crowded with tourists coming from different governorates of the Sultanate, accompanied by their families, in addition to tourists who love camping, and hiking from the Arab world, and foreign communities residing in the Sultanate, who visit the park to spend a day or two.
At the gate of the park, a board has been placed by the Directorate General of Muscat Municipality in the Wilayat of Quriyat, which oversees the park, and which carries instructions and general guidance for visitors.
There is also a security point at the entrance with a guard appointed by the municipality to operate the park, and guide the visitors, showing them the way to the various facilities.
Other facilities, including the green spaces, tiled corridors, shaded rest areas, benches, games for children, drinking water, and toilets have also been provided. The park overlooks the Sea of Oman, and enjoys a range of geographical variety from rocky places to soft sand, in addition to enjoying mild weather and temperatures.
What makes the park more beautiful is the sea beach that surrounds it from the east, called by residents of coastal villages, “an Omani beach,” which is surrounded in the west by a desert area and the towering mountains behind, beyond which lies the agricultural Al Arabiyeen valley in the Wilayat of Quriyat.
On the northern side lies the Dhabab area, whereas the park is surrounded on the southern and eastern side by the Ras A’Shajarah Sanctuary from the Office for Conservation of Environment at the Diwan of Royal Court, which includes deer, ibex and other animals and different birds.
In the middle of the park is a wide and deep hole, like a water well, but it is larger and much broader, which gives the park its name “Hawyat Najm.”
The hole is more than 10 metres deep, and at the bottom one can find salty water, coming from the nearby sea, which is only about three kilometres away. Some visitors coming to the park swim in it. They climb down the staircase made by the municipality.
Sheikh Ali bin Humaid Al Ghuzaili, in-charge of Dhabab Village said ‘Hawyat Najm’ Park has existed since he was born and raised in the village.
He further said the site was discovered thousands of years ago. It was called “Al Faqa’a” in the past and was then changed to “Hawyat Najm.”