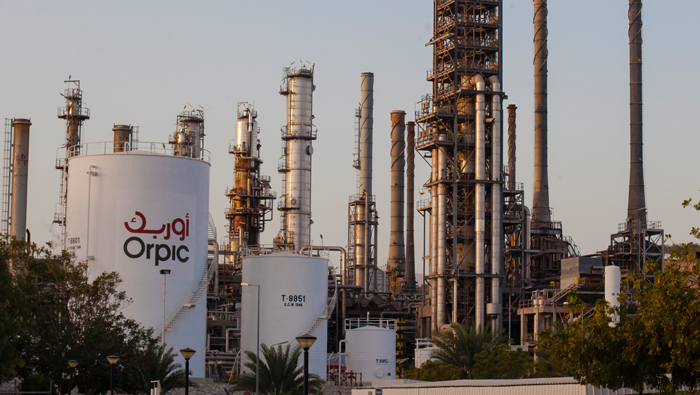 Muscat: State-owned Oman Oil Refineries and Petroleum Industries (Orpic) will lay foundation stone for the natural gas liquids extraction station in Fahud in January, which is part of $6.5 billion-Liwa Plastics Industries Complex.
Eng. Musab bin Abdullah Al Mahrouqi, chief executive officer of Orpic, said that the project, which will be implemented by the Korean GS Company and Japanese Mitsui Company, is the third part of Liwa Plastics Industries Complex at a cost of $688 million.
The CEO further said the company laid the foundation stone for the two parts ‘I and II’ of Liwa Plastics Industries Complex in Sohar Industrial Port last week. It comprises the steam cracking unit at a cost of $2.8 billion, and the polypropylene and polyethylene production unit at a cost of $888 million. The fourth part includes the 300km pipeline to transport natural gas liquids from the Fahud station to Sohar Industrial Port at a cost of $112 million, he said, adding: “the Indian Punj Lloyd company has started implementing the pipeline.”
He explained that the natural gas fluids that will be extracted from the Fahud station will form 60 per cent of the raw material for Liwa Plastics Industries Complex and the starting of operation of the station will coincide with the start of operation of the other three parts of Liwa Plastics Industries Complex by 2020.
Liwa plastics complex, when it starts operation, will mark a change in the mixture of products and the pattern of Orpic work.
Doubling profit
The company said its profit will double and there will be new commercial opportunities, in addition to many job opportunities. Additionally, the complex will support the development of plastics industry sector in the Sultanate.
It is expected that this project will increase the volume of plastic products by one million tonnes, which will raise the total plastic production of Orpic to 1.4 million tonnes of polyethylene and polypropylene. Due to the integrated plant in Sohar, which includes Orpic refineries, aromatics factory, polypropylene plant, the steam cracking unit, the manufacturing units of polypropylene and polyethylene, the project will be one of most complete refining and petrochemical complexes in the world.
Eng. Al Mahrouqi affirmed that Orpic, through its projects whose cost exceed $9.5 billion, is moving “in the right way,” as those projects, including Liwa Plastics Industries Complex, will change the structure of the marketing company.
Further, Orpic products will have more than one product, which helps to cope with the vagaries of oil prices and gives us more flexibility in shifting from fuel-profit refineries to integrated company based on the profitability of fuel and other materials, petrochemical and plastic products. He hoped that 50 per cent of Orpic profit in 2020 would be from Liwa Plastics Industries Complex.