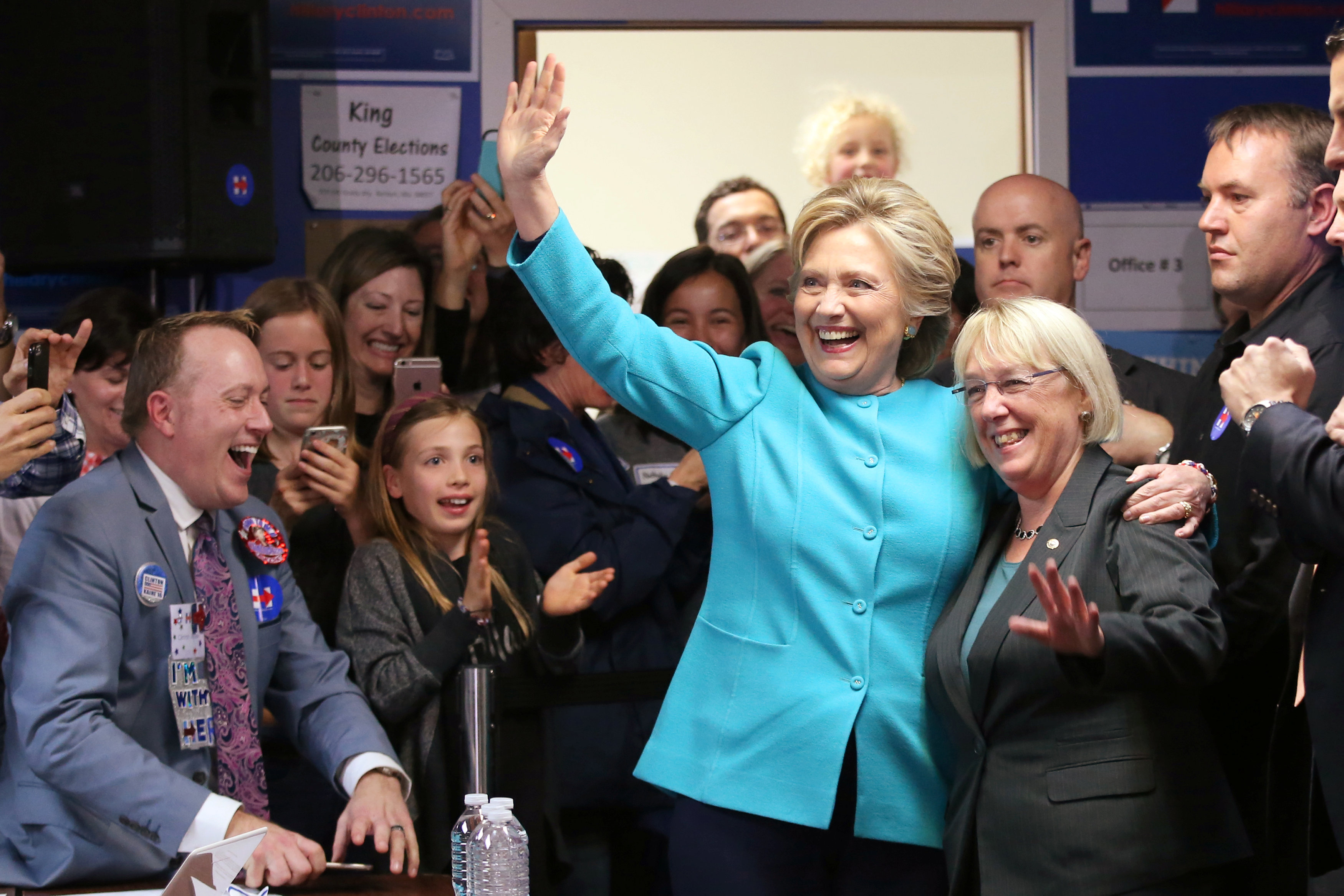 In both debates against Hillary Clinton, Donald Trump went out of his way to bring up the name of a journalist and former White House official who has held no high office and is unknown to most voters. The name is Sidney Blumenthal, one that is familiar mainly to Washington insiders from his role in the Clinton wars of the 1990s. Even Trump's most ardent supporters could be forgiven for wondering why critics keep circling back to this man.
A year ago, House Republicans grilled Clinton about Blumenthal during her marathon session before the Benghazi committee. In a leaked e-mail, Clinton campaign chairman John Podesta says Blumenthal is "lost in his own web of conspiracies."
In some ways all of this is strange. Blumenthal hadn't been in the spotlight since the 1990s, when he served as an aide in the Clinton White House. It was Blumenthal who testified on the president's behalf during the impeachment trial. And according to Blumenthal's ex-friend, the late Christopher Hitchens, it was Blumenthal who was spreading stories to discredit Clinton's paramours to other journalists. In this period, he earned the moniker "Sid Vicious" for this kind of knife work.
The reason Blumenthal is in the news 16 years later is because he is tied to three lines of attack Republicans have used against Clinton this election cycle. Let's start with her private e-mail server.
The public learned of this because Blumenthal's own e-mail was breached by Marcel Lehel Lazar, a Romanian hacker who goes by the moniker Guccifer. Gawker broke this story in 2013. In March 2015 the FBI began its investigation into the server, following a story in the New York Times.
The issue still dogs her. On Thursday her lawyers provided formal, written answers to a judge about her private e-mail server in a Freedom of Information Act lawsuit.
Then there are the contents of Blumenthal's e-mails to Clinton's private account. Many of them are passing along links to news stories. But in some cases Blumenthal offers Clinton ad hoc policy advice, particularly on Libya. In 2011, Clinton was a strong advocate for intervention in Libya. Her side prevailed, and the US helped to topple its dictator. But today the country is in tatters. It was in Benghazi, Libya, that Ambassador Chris Stevens and three other Americans were murdered on the 11th anniversary of 9/11.
The chairman of the House Benghazi Committee, Representative Trey Gowdy, alleged in 2015 that Blumenthal, who urged the US to overthrow Muammar Gaddafi, stood to profit from that intervention. In some cases, Blumenthal's e-mails share intelligence tips he was getting from a network of former CIA officers. As Blumenthal was sharing tidbits about Libya, he was also seeking business for a company that builds field hospitals in Libya. But he was never able to secure a contract for a company he had promised to connect with the Libyan opposition that stood to take power after the fall of Gaddafi.
That Blumenthal was able to directly access Clinton as secretary of state played into another Clinton scandal that goes back to 2008. During the primary that year, James Asher, who was then the Washington bureau chief for the McClatchy newspaper chain, says Blumenthal urged him to check out stories about whether President Barack Obama was born in Kenya. Blumenthal has denied this. But the Obama White House was angry enough about Blumenthal's own role in stoking the first stories about Obama's birth that the White House stopped Clinton from offering him a job at the State Department in 2009, according to the New York Times.
All of this raises the question: What exactly is Blumenthal's relationship with the Clintons today? Hillary Clinton herself, in retrospect, dismissed the messages that he was sending to her when she was at the State Department in 2015, saying that she had many old friends and that Blumenthal was one of them. I spoke with some Democrats who insist that Blumenthal these days is more of a nuisance than a major influence on Clinton. Podesta wrote in a January 1, 2016, e-mail to a columnist for the Hill newspaper: "I pay zero attention to what he says."
And yet, the Clintons still kept him around. As the Benghazi investigation showed, he was earning around $10,000 a month for a job at the Clinton Foundation. Blumenthal also was paid by the nonprofit Media Matters, which attacks Clinton's conservative media opponents.
Jonathan Allen, co-author of the Clinton chronicle "HRC," told me, "You could dismiss him as a gadfly if it weren't for the fact that he continued to be in contact with her for years and had access to her."
Last month, Blumenthal himself spoke about his relationship with Clinton for a video released by the Nexxus Institute, which is sponsoring a conference where he is scheduled to speak after the election. Blumenthal says he's known Clinton for 30 years and that they both have "defended against all sorts of people who have used whatever means they could, many of them underhanded, in order to try and destroy reputations, attack people personally, to engage in what we call the politics of personal destruction."
For those who remember Blumenthal in the 1990s, those words will sound like projection. It was Blumenthal who set out to personally destroy the reputation of former White House intern Monica Lewinsky. As Hitchens wrote in his 2003 review of Blumenthal's book on the Clinton White House, Blumenthal told him that Lewinsky was "a predatory and unstable stalker."
Nearly 20 years after the Lewinsky scandal, Blumenthal looks less like a knife man, more like a feckless hanger-on. It's true that Blumenthal has been loyal to the Clintons. But from his whispers about Obama to his advice about Libya to his poor cyber security, it's hard to say he has been a good friend. Indeed, by all appearances he has helped Clinton's opponents far more than he ever helped her. - Bloomberg View