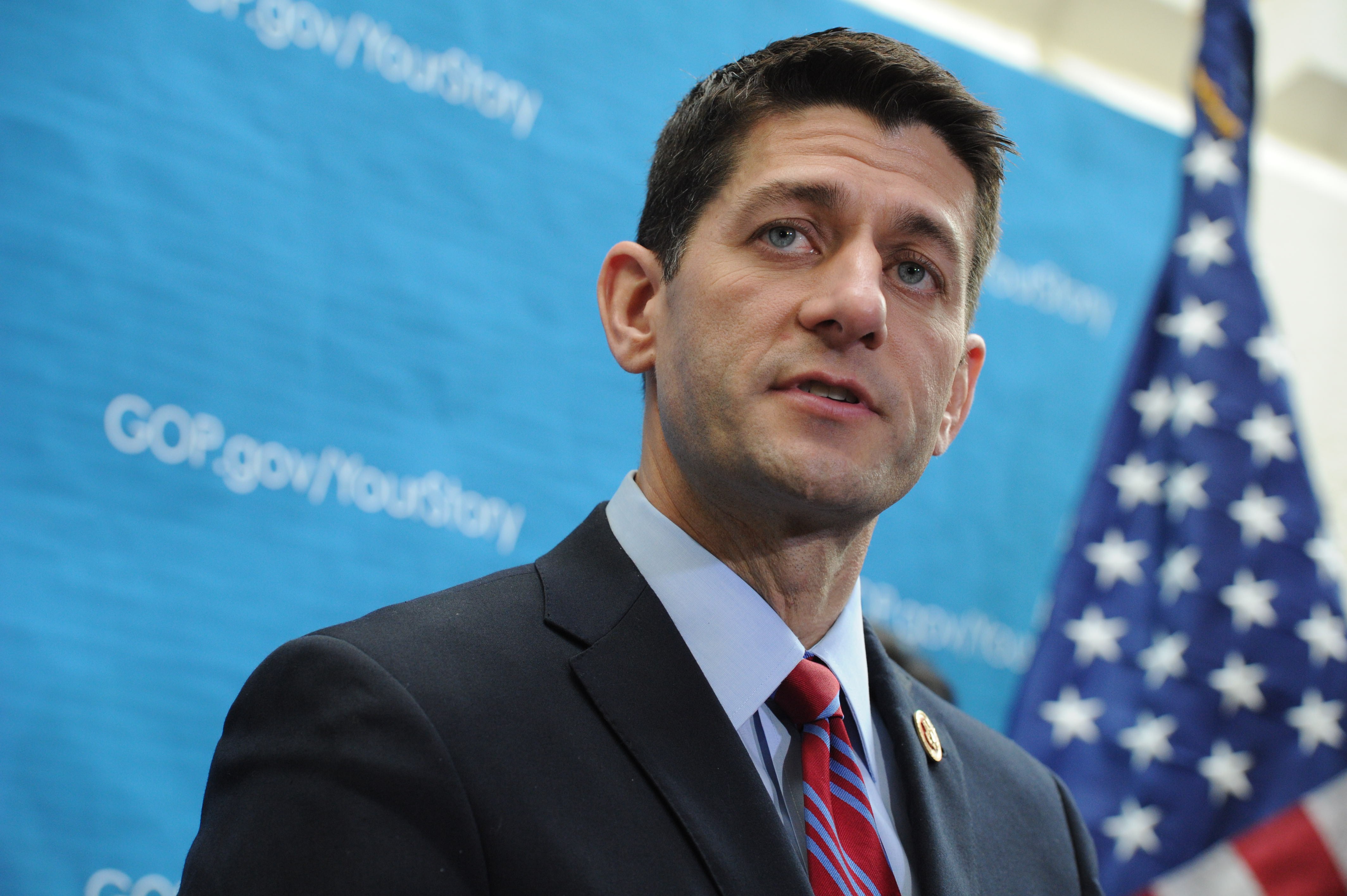 Paul Ryan used his news conference last week to send a message to Republican donors and activists: If they help mobilise enough votes for Donald Trump in November, they'll be rewarded with president Ryan in January.
To drive the point home, Ryan is abandoning the icky face he makes at the mention of Trump's name. Instead, he'll be campaigning with his party's presidential nominee this weekend in his home state of Wisconsin. Trump may be a moral, psychological and political jalopy -- "not my kind of conservative," as Ryan once said -- but the House speaker still hopes to drive him through the White House gate before the inevitable breakdown.
Ryan last week promised that should Trump win, Ryan will put together a giant octopus of a bill, with tentacles that extend deep into the right-wing id, reducing taxes on the wealthy, repealing Obamacare for the less fortunate, and more. Then with the help of Ryan's Senate counterpart, Mitch McConnell, he'll ram the bill through Congress on a party-line vote using a provision incongruously known as "reconciliation."
Ryan is as consistent as Trump is variable. He has been energetically promoting some combination of giant tax cuts for the wealthiest and huge budget cuts for the poor throughout Barack Obama's entire presidency.
Ryan's "Better Way" plan would slash taxes on the wealthy, including eliminating the estate tax. According to the Tax Policy Center, three quarters of the plan's tax cuts would flow to the top 1 per cent of taxpayers initially; by 2025, the top 1 per cent would capture almost 100 per cent of the value. Without revenue or spending cuts to offset the tax cuts, the federal debt would increase by at least $3 trillion over the first decade and continue rising from there.
Ryan believes tax cuts for rich people have magical properties that allow federal revenue to disappear without leaving deficits behind. But he also has a backup plan. Here's what budget expert Robert Greenstein of the liberal Center on Budget and Policy Priorities wrote about this year's House budget, which was never voted on but nonetheless provides a clear direction for GOP priorities:
The budget plan that the House Budget Committee’s GOP majority approved in March would cut programmes for low- and moderate-income Americans by a startling $3.7 trillion over ten years — targeting those programmes for 62 per cent of the plan’s budget cuts. Under that budget, 42 per cent of all federal resources for low-income programmes would disappear by 2026. In addition, “side-car” legislation with specific cuts in various domestic programmes, which Speaker Ryan has embraced to try to secure House passage of the budget, would get 87 per cent of its cuts from low-income programmes.

A multi-trillion-dollar transfer of wealth from poor Americans to rich Americans may not sound like what the "economically anxious" Trump base has been clamouring for. But if Ryan is betting it will be a relatively easy sell to Trumpsters, I suspect he's right.
The tax cuts will be sold as they always are -- as the sacred unleashing of economic dynamism with the little guy, not the party donor, always foremost in the Republican mind. The budget cuts will be easier still. Cutting off your nose to spite your face is a long tradition in American populism, especially for those causes steeped in resentment of nonwhites. After this ugly campaign, can anyone doubt that many Trump supporters will thrill to the promise of poor blacks and Hispanics losing federal support -- even if it means that members of their own families suffer as well?
Racial resentment could even grease the skids. As Ed Kilgore wrote, through reconciliation Ryan could essentially foment a bloodless, instant revolution:
One of the advantages of using reconciliation is that the entire toxic ball of reactionary legislation can be whipped through Congress and placed on Trump’s desk while he’s still looking for the washroom keys. He may still maintain big differences with congressional Republicans on matters like trade policy and immigration policy and NATO. But he’s given us no reason whatsoever to think he’d pause before rubber-stamping a bill that kills
Obamacare and gets rid of all that “welfare” crap his supporters hate — while giving people like himself a historic tax cut billed as a job-generator.

Ryan has never exhibited respect for Trump. But if Trump signs Ryan's grand design, the speaker can retreat to his Capitol suite and observe the eternal flame of Trump's perpetual dumpster fire from a safe distance. If voters conclude that a brutal increase in inequality isn't what they bargained for, Trump will get the blame. Ryan will keep the donors. - Bloomberg View