Boeing wins $18.6b deal with Qatar Airways for 100 aircraft 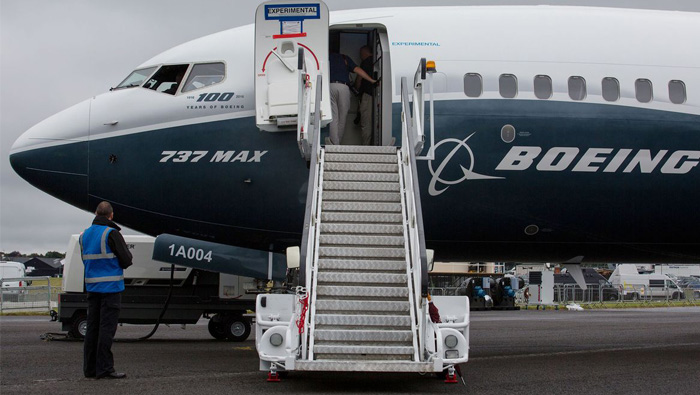 Chicago: Boeing landed an $18.6 billion deal with Qatar Airways for as many as 100 aircraft, providing a sales boost to the United States company’s upgraded 737 jetliner with one of the year’s largest commercial airplane deals.
The Doha-based carrier pledged to buy as many as 60 of the 737 Max 8 jet, valued at $6.9 billion at list prices, marking its first narrow-body order with Boeing since 1979. Qatar Airways also ordered 40 total 777 and 787 Dreamliner twin-aisle aircraft, Akbar Al Baker, the airline’s chief executive officer, and Boeing commercial airplane chief executive officer Ray Conner have said in Washington.
With the commitment, Al Baker made good on earlier threats to buy Boeing’s 737 Max after rejecting initial A320neo deliveries from Airbus because of engine issues. The transaction also provided a vote of confidence in the Boeing jet, which is on pace to begin commercial service months ahead of schedule in the second quarter next year.
Qatar Airways will take its first Max in 2018, Al Baker said in an interview. He insisted the decision to pivot to the rival Boeing model wasn’t intended as retaliation against the European planemaker. “There is no message to Airbus,” he said. “We don’t send messages by aircraft purchases to each other.”
Boeing boost
Boeing pared a drop of as much as 1.4 per cent before the Qatar Airways announcement to trade 0.2 per cent lower at $134.07 in New York. Airbus fell as much as 2.1 per cent as news of the order broke, then declined 1.1 per cent to €53.83 at the close in Paris.
The order gives a boost to Chicago-based Boeing, which, like Airbus, has been contending with sales slowed by economic uncertainty in Europe and Asia and a commodities downturn in Russia and Brazil. Meanwhile, relatively low fuel prices have damped demand for new, fuel-efficient wide-body jets such as the 777 and 787 and contributed to a glut of second-hand models.
Qatar Airways still intends to follow through on a 2011 order for 50 Airbus A320neo and A321neo planes, which have a combined value of $6.4 billion at list prices, Al Baker said. But he also took a swipe over issues with the aircraft’s geared turbofan engine, which is made by United Technologies Corp.’s Pratt & Whitney unit, saying the delays left him with “no alternative” but to order the “reliable” Boeing narrow-body planes.
Expanding network
Qatar is also ordering 30 of Boeing’s 787-9 model and 10 777-300ER jets, valued at a combined $11.7 billion at list prices before discounts that are customary for large aircraft purchases. It is Boeing’s largest twin-aisle sale this year, providing a little more visibility into plans for the 777, the planemaker’s largest twin-engine aircraft, as well as for the Dreamliner, the company’s marquee carbon-fiber jet.
Boeing CEO Dennis Muilenburg said last month that current sales campaigns could determine whether Boeing boosts Dreamliner output -- and whether a dearth of orders will force it again to slow assembly of current-generation 777 models before an upgraded version debuts in 2020.