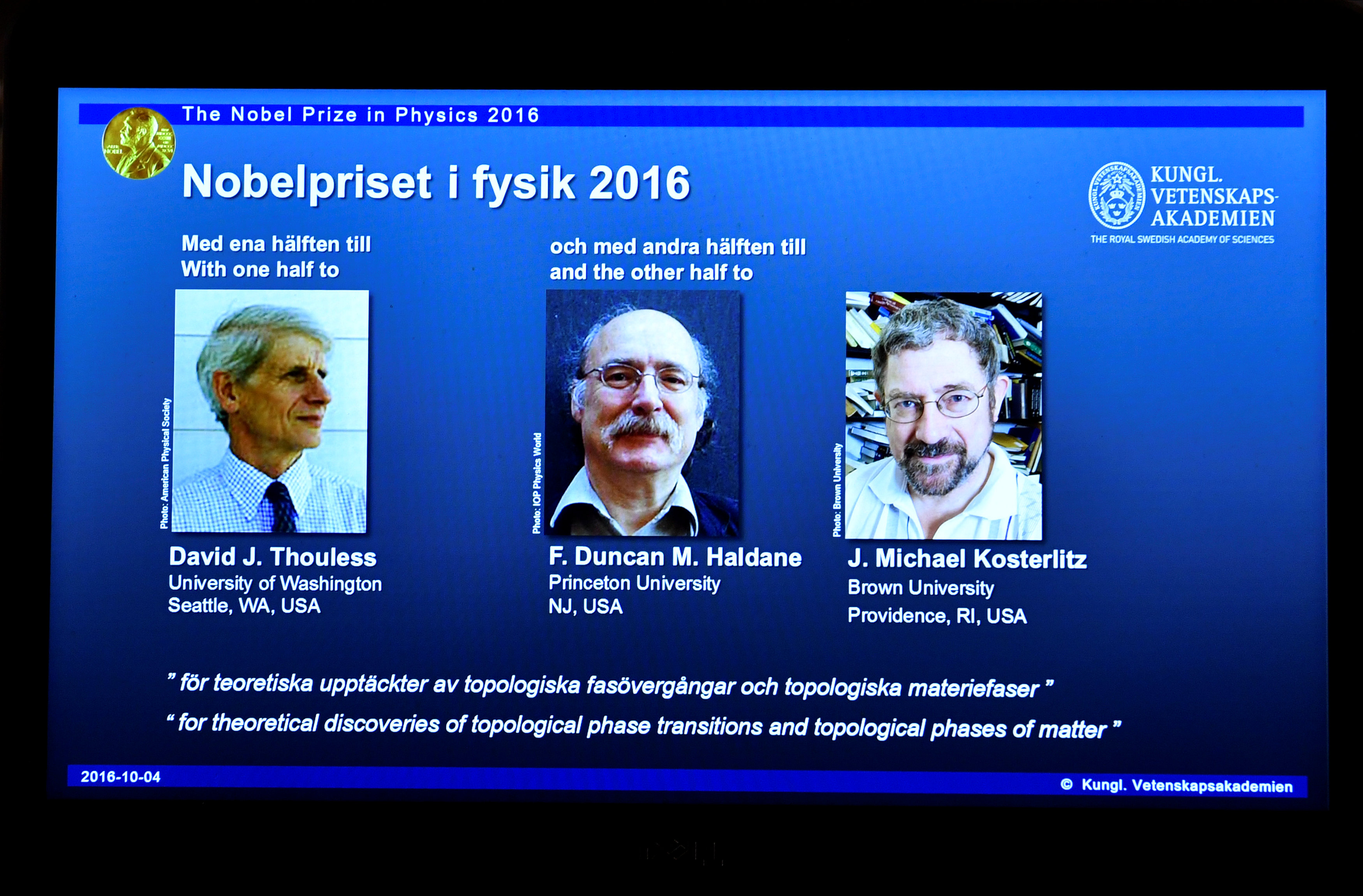 Stockholm/London: Three British-born scientists won the 2016 Nobel Prize in Physics on Tuesday for revealing unusual states of matter, leading to advances in electronics and potentially helping work on future quantum computers.
David Thouless, Duncan Haldane and Michael Kosterlitz, who all now work at US universities, share the prize for their discoveries on abrupt changes in the properties, or phases, of ultra-thin materials.
Their research centres on topology, a branch of mathematics involving step-wise changes like making a series of holes in an object.
The difficult-to-grasp concept was illustrated by Nobel Committee member Thors Hans Hansson at a news conference using a cinnamon bun, a bagel and a pretzel.
Phases are obvious when matter goes from solid to liquid to gas, but materials can also undergo topological step changes that affect their electrical properties. One example is a superconductor, which at low temperatures conducts electricity without resistance.
"Thanks to their pioneering work, the hunt is now on for new and exotic phases of matter," the Royal Swedish Academy of Sciences said in awarding the 8 million Swedish crown ($937,000) prize.
"Many people are hopeful of future applications in both materials science and electronics."
Thouless was awarded half the prize, with the other half divided between Haldane and Kosterlitz.
"Suddenly, people are realising that the topological effects in quantum mechanics are just a tremendously rich subject," said Haldane, speaking via a phone link to reporters in Stockholm.
The 65-year-old said he was "very surprised and very gratified" at receiving the call to say he had won.
Andy Schofield, a professor of theoretical physics at the University of Birmingham, where Kosterlitz and Thouless carried out their early work in the 1970s, said the new understanding of phase states was particularly promising in computing.
"One of the most exciting technological implications is in insulators that don't carry electricity normally but can be forced to carry electrical current at the surface," he told Reuters. "That's a very robust state, which gives a stability that is essential to quantum computing."
Superfast quantum computers, one of the holy grails of science, should be able to test multiple solutions to a problem at once and could in theory solve in seconds problems that take today's fastest machines years to crack.
Traditional computers use binary bits of information to store data while quantum computers use "qubits" that can simultaneously be 0 and 1, making them ultra-fast but unstable.
Physics is the second of this year's crop of Nobels and comes after Japan's Yoshinori Ohsumi was awarded the prize for medicine on Monday.
There had been speculation this year's prize might be awarded for the first detection of gravitational waves, the ripples in the fabric of space-time first predicted a century ago by Albert Einstein.
Finding gravitational waves has been the biggest story in physics this year but the breakthrough, announced by international researchers in February, may have come too late for the Nobel Committee.
As Nobel physics laureates, the trio of researchers join the ranks of some of the greatest names in science, including Einstein, Niels Bohr and Marie Curie.
The prizes were first awarded in 1901 to honour achievements in science, literature and peace in accordance with the will of the Swedish dynamite inventor and business tycoon Alfred Nobel, who left much of his wealth to establish the award.