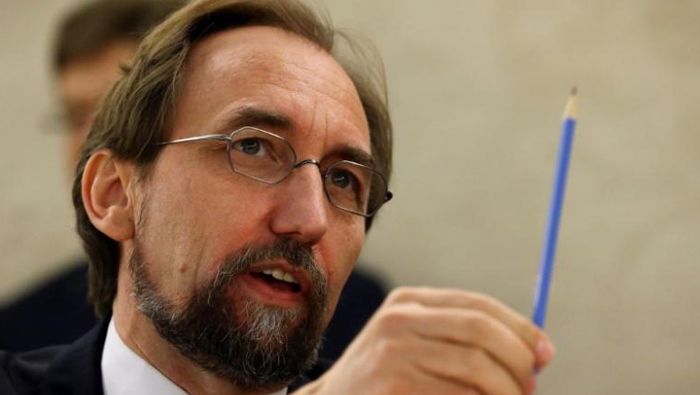 Geneva: United Nations High Commissioner for Human Rights Zeid Ra'ad al Hussein warned Russia on Tuesday over the use of incendiary weapons in Syria's besieged enclave of eastern Aleppo, and said crimes by one side did not justify illegal acts by the other.
Zeid said that the situation in Aleppo demanded bold new initiatives "including proposals to limit the use of the veto by the permanent members of the Security Council", which would enable the U.N. body to refer the situation in Syria to the International Criminal Court (ICC).
"Such a referral would be more than justified given the rampant and deeply shocking impunity that has characterised the conflict and the magnitude of the crimes that have been committed, some of which may indeed amount to war crimes and crimes against humanity," Zeid said in a statement.
Syria's government and its allies had undertaken a "pattern of attacks" against targets with special protection under international humanitarian law, including medical units, aid workers and water-pumping stations, he said.
Russia is a key player in the Syrian civil war by virtue of its military support for President Bashar al-Assad and its role as one of five veto-holding powers on the Security Council.
The use of indiscriminate weapons such as incendiary weapons in heavily populated areas was of particularly grave concern, Zeid said, drawing a parallel with the battles of Warsaw, Stalingrad and Dresden during World War Two.
There is no statute of limitations on international crimes, his spokesman Rupert Colville said.
"I remind all State parties to Protocol III of the Convention on Certain Conventional Weapons, including the Russian Federation, that they are strictly prohibited from using incendiary weapons in airstrikes on heavily populated areas, and that the use of such weapons by ground forces is severely restricted," Zeid said.
The rebels' use of inaccurate "hell-fire cannons", homemade mortars that fire gas cylinders packed with explosives and shrapnel, was also totally unacceptable, he said.
Designating the enemy as a "terrorist organisation" was not an excuse to ignore the laws of war, Zeid said.
World Health Organization spokeswoman Fadela Chaib said that between Sept. 23 and Oct. 2, 342 people had been killed in eastern Aleppo, including 106 children, and 1,129 injured, including 261 children.
Those figures were based on reports from functioning health centres and the true figures were probably much higher, she said.
"As of yesterday, we had only six partially functioning hospitals that are in service, only one hospital that offers trauma services," Chaib told the briefing.