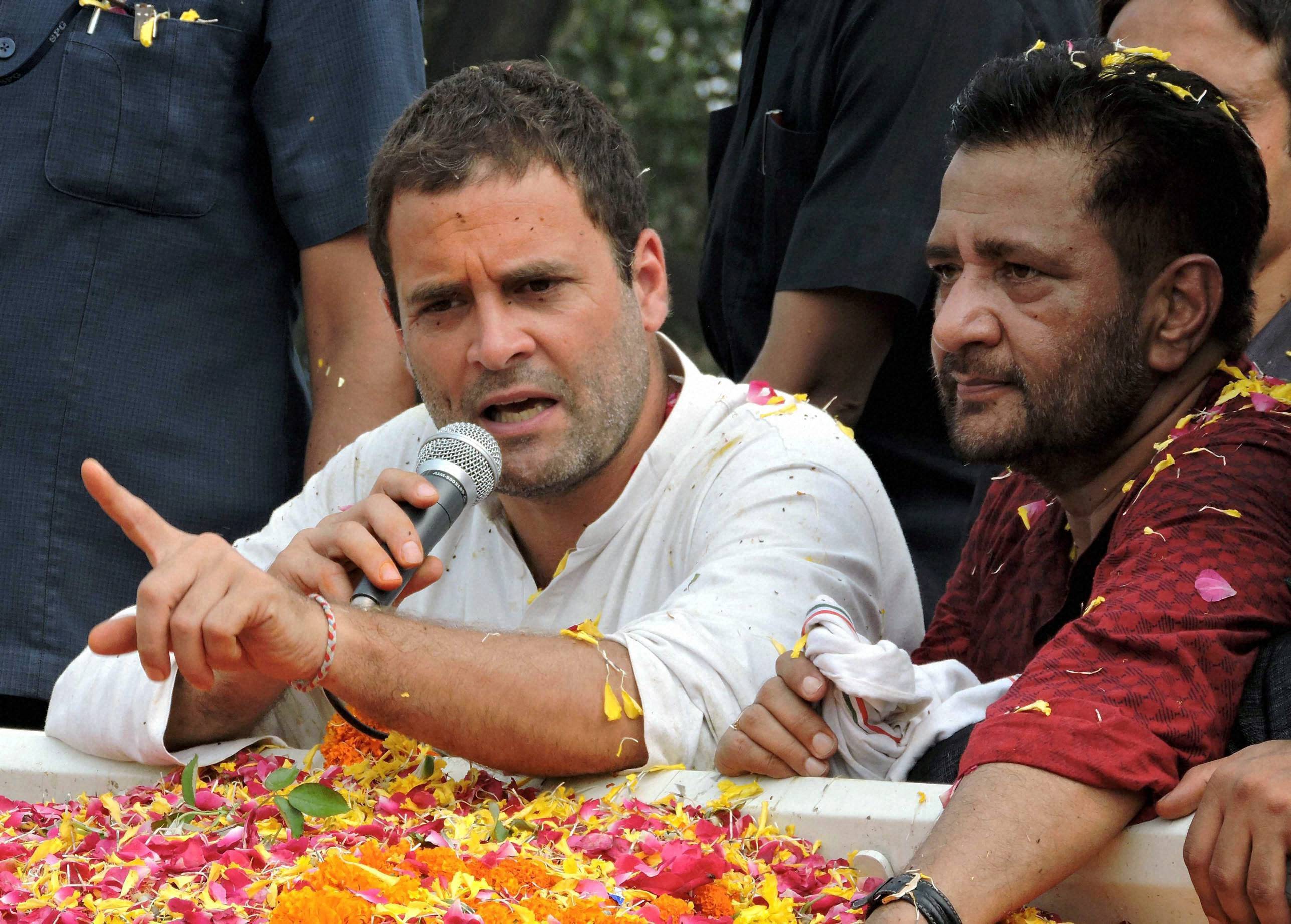 Shahjahanpur/ Bareilly(Uttar Pradesh): Congress leader Rahul Gandhi has accused Prime Minister Narendra Modi of making cow "an election stunt" and slammed the BJP and Rashtriya Swayamsevak Sangh(RSS)for "doing politics" in the name of protection of cows.
"During my ongoing Kisan Yatra from Deoria to Delhi, I have seen the plight of cows roaming on streets," he said during a roadshow here.
The Congress vice president, who was addressing villagers during a 'Khaat Sabha' at Puwaya on Tuesday night, said Prime Minister Narendra Modi had made cows nothing but "an election stunt".
He said that cows have been roaming on the streets and dying unattended in different parts of the country as there was none to take care of these animals. "What is being done is just politics in the name of cow protection," he said. His remarks came against the backdrop of rise in cases of atrocities against Dalits and members of minority communities by so-called cow protection groups.
Rahul accused Modi of failing to fulfil the promises made before the Lok Sabha elections, particularly about providing jobs to youths and bringing back black money from abroad.
"It is only Congress that keeps its promise," he said and cited the farm loan waiver when Congress-led UPA was in power at the Centre. He said that the main purpose behind his yatra was to understand the problems faced by farmers and assured them that if his party came to power, the issues raised by them would be addressed effectively.
Meanwhile, Rahul accused the ministers in the Akhilesh Yadav government in Uttar Pradesh of "patronising" criminals, saying this was the reason why the law and order situation had collapsed in the state. "Crime has increased as it is being patronised by the higher-ups. Hooligans are being patronised by ministers in the Uttar Pradesh government. This is the reason behind the poor law and order situation in the state," he told the students of Rohilkhand University during an interactive session with them.
Girl students of the university told Rahul that they did not feel safe as hooligans and eve-teasers bothered them regularly. Rahul reacted saying, "The law and order of the state is the worst. What else can be expected in this jungle raj." Mounting an attack on the ruling Samajwadi Party (SP) in the state, he said, "The cycle's (election symbol of the SP) wheel is stuck. It has not been moving and as a result, the development of Uttar Pradesh has stopped."
During his roadshow in the city, Rahul visited a temple in the cantonment area and a gurdwara. He also visited Ala Hazrat Dargah and addressed meetings where he attacked Prime Minister Narendra Modi and alleged that he "only served the interests of industrialists". During the roadshow, some persons tried to hand over a memorandum of their demands to him but were prevented by the security personnel which led to sharp exchange of words between the two sides.