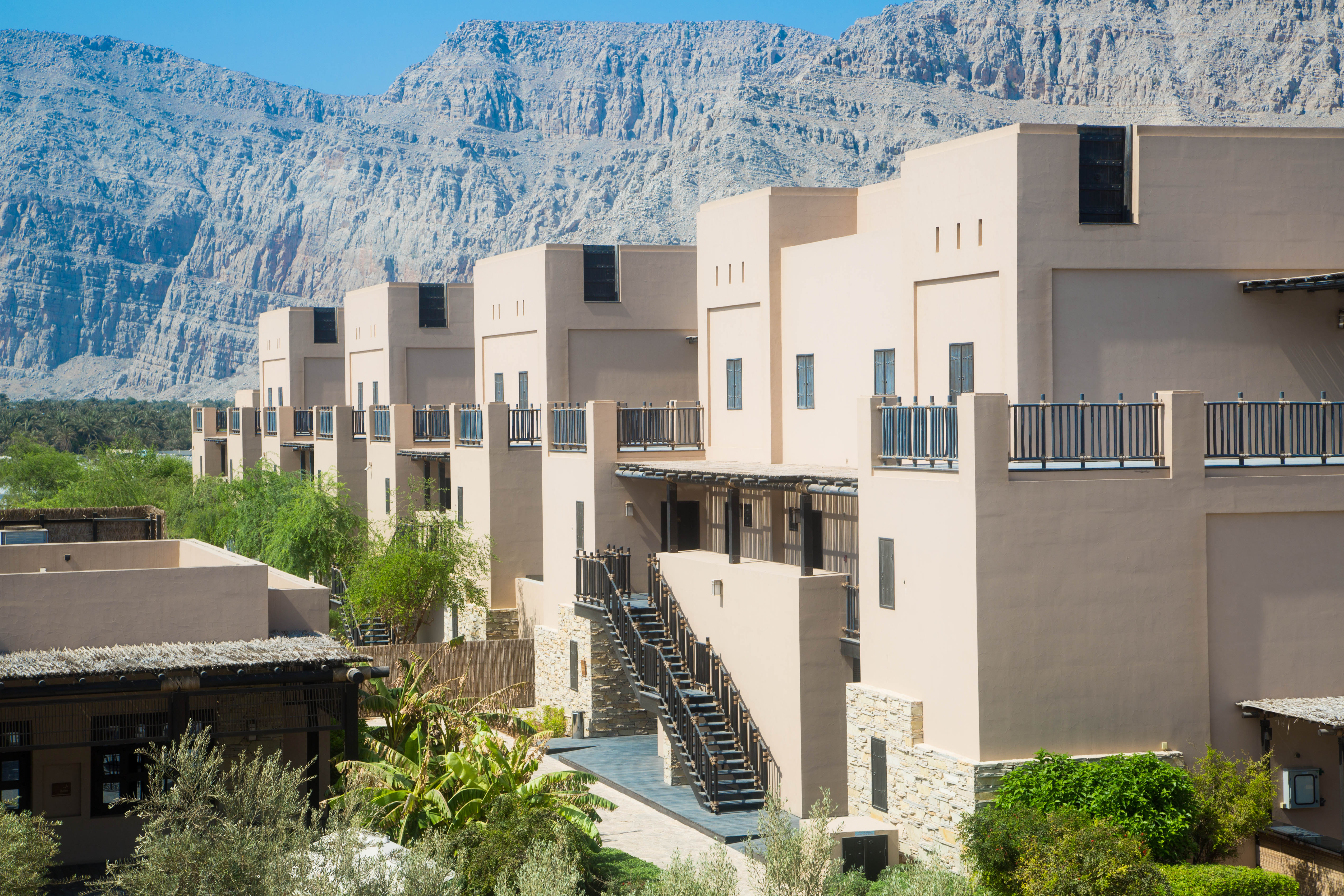 Oman is a land of treasures waiting to be uncovered — be it places, people or activities to do. Last weekend, I set off by ferry in hopes of exploring one such gem, Musandam, a governorate tucked far north of the UAE-Oman border, at the tip of a small peninsula jutting into the Arabian Gulf.

Ancient and rich with stories and historic significance, due to its strategic position separating the Arabian Gulf from the Sea of Oman, Musandam is a world apart, requiring a flight, a multiple boarder road journey, or a half-day ferry ride to reach. And, though there are a number of humble guest houses set amidst the cliffs and coast of Khasab, the capital city is also home to Atana Musandam, a downright lavish abode. Who doesn't like a dose of luxury with their adventure?

Bags packed, I marched into the National Ferries Company office in Muttrah, just before the fish roundabout, roughly two hours prior to my scheduled departure. Shortly, a few other passengers and I were loaded on a bus and taken to Port Sultan Qaboos where our ferry awaited. After a brief security screening, I was onboard settling into a window seat. I wore a wide smile as we embarked on our journey, gazing out over the vast spread of ocean that faded into the clear blue sky ahead.

Six hours later, the sparkle of little yellow lights appeared in the distance as we approached a humble port. I stepped off the ferry, eager to stretch my legs. Aside from a scattering of buildings, the area was quiet, the steep, sheer mountain peaks hemming us in. A small town was barely visible behind the rock formations.

A car from Atana was waiting for us at the bottom of the steps, and I was surprised when we reached the posh oasis in a mere two minutes. It had grown dark, but I could sense the rural and raw Omani-ness of the place as we drove through the main gate, pulling to a stop in front of one of the wood, stone, and stucco structures where two gentlemen were waiting. After a warm greeting, we were led into the reception lobby; everything soothing, natural shades of brown and beige, from the tinted cemented floor to the bamboo wood ceiling, echoing the surrounding mountains and deserts.

The space could have passed as a display in an Omani museum, from the traditional texture of the walls, to the artefacts perfectly hung and lit on the walls. Even the sofa was adorned in traditional red bedouin textiles. I immediately fell in love with the rustic, local feel.

The auto-door behind me opened briefly and I could catch a glimpse of what lay in store. I couldn’t wait to see the rest of the hotel, so grabbed my key and set off to find it. I descended three stairs — to my left was a barrel fountain and to my right was the place I would end up spending a lot of my time over the weekend, the Al Mawra restaurant. I followed a softly lit passage, feeling like an Arabian princess amidst the dim lighting and clusters of low rise buildings, reminiscent of a perfectly preserved (though quite posh) village.

As I entered my room, I was immediately struck by the lush textures — clay walls, bamboo tube ceilings, handcrafted wooden tables and nightstands, and earthen water pots hanging in the corner. The charming design was complemented by all the amenities one would need for a comfortable stay, from a television to a coffee maker. But the best element of the room would reveal itself only the next morning when the sun came up.

The next day, I stepped out onto my balcony at sunrise, letting the unadulterated natural colours and breeze wash over my skin. I was sure my room had the best view in the whole resort, until I figured out that the view from almost all rooms in this hotel were equally stunning, thanks to Musandam’s mesmerising topography.

With sun, mountains, ocean, sand, and cool breeze laid out before me, I had trouble working up the motivation to leave my balcony, but I was excited to venture out and explore. I meandered down to the swimming pool and gym, my footsteps echoing on the cobblestone paths. The Harry Potter fan in me squealed as, for a few moments, I felt like I was in Hogwarts.

Omani music played faintly in the distance igniting my imagination; I wondered which adventure I should tackle first. Exploring the inlets in an old fashioned dhow? Climbing the towering hills in a 4x4 Jeep safari? Snorkelling? Diving? A village tour? I began slowing making my way towards the restaurant, sure that a good meal and some much needed caffeine would help me decide.

I sipped my coffee and took in the awesome views. Though I've spent a few years in Oman, I was seeing the Sultanate from a brand new angle. I found myself enchanted, falling in love with Oman all over again. —[email protected]

Thursday
*10.00am: Reach the NFC headoffice in Muttrah. Make sure you reach on time, a full two hours before the scheduled departure so you don’t miss the bus that will take you to the ferry.
12.00pm: Board the ferry and set sail from Muscat to Musandam.
6.00pm: Pat yourself on the back for making it without falling sea-sick. Before disembarking make sure you take a look at the Musandam landscape from the ferry. It’s beautiful.
6.30pm: Express your joy on reaching Atana Musandam, go breathe in the sea air on your balcony.
9.00pm: Go to the Al Mawra restaurant for dinner. The chicken machboos, served in a gorgeous gold accented serving dish, is absolutely delicious.

Friday
5.30am: Wake up early and watch the sunrise from your balcony.
8.00am: Go for breakfast to Al Mawra restaurant, but don’t make the mistake of stuffing your face with everything that is available on the generous buffet, as you don't want to be overly full on your boat ride (like I was).
9.00am: Assemble in the lobby and set off for your dhow cruise. After clicking selfies in, on, and outside the 20-year-old dhow, socialise with the dhow guide. You will be amazed by the information he will give you about Musandam. Since there are no seats, just carpets and cushions, find yourself a place to sit and plump some pillows to make yourself comfortable. You’ll soon realise that you can’t sit still for long, as the breathtaking scenery will have you out of your seat clicking pictures of the mountains floating by like icebergs.
10.30am: By now you’ve spotted your first few dolphins, be careful not to fall overboard while trying to catch a glimpse of the gorgeous creatures.
11.00am: The dhow will dock at Telegraph Island, where the British naval forces were stationed back in 1864, when it served as a station to boost telegraph messages along the Arabian Gulf submarine cable. The water here is almost 18% salty, which means the density is so high that you will float in the water, so jump in for a refreshing dip (life jacket optional).
12.00pm: After your swim warm up with Arabian coffee or tea and fresh fruit on board the dhow as you head back towards the port where a bus will be waiting to take you back to the hotel.
1.00pm: After taking a quick shower go to the Al Mawra restaurant for lunch. The porridge fish with saffron risotto is fabulous.
2.00pm: Recharged, head out for the Jebel Harim safari in a 4X4 and enjoy the stunning scenery along the way as you venture through the Bedouin village of Sayh and Rowdah Village where you will see a pre-Islamic graveyard. Strangely, it's more beautiful than spooky.
7.00pm: Go back to your cosy room and take a power nap.
8.30pm: Hunger bells should be ringing by now, so go back to Al Mawra and order whatever you want from the menu, because honestly everything is pretty amazing, including their mocktails, like Shirley Temples and Virgin Mimosas.

Saturday
8.00am: Enjoy your last breakfast at Atana Musandam.
10.00am: Watch your kids play, take a dip in the pool, or go the gym to try and burn off some of the calories you earned at Al Mawra over the last two days before checking out and heading for the port.
*11.00am: Get to the port nice and early to check in for your ferry.
1.00pm: Set sail for Muscat, watching the coastline of Musandam grow smaller and smaller as you drift back home.

*Alternatively, you can drive to Musandam, but be aware that you must cross the UAE border, so some will need to obtain visas prior to the drive. Flights are available on Oman Air.

A Journey By The Sea
As a young expatriate woman, the National Ferries Company, made my trip to Musandam possible, allowing me to avoid leaving the country to reach this far flung corner of Oman. The majestic ferry I travelled on was divided into three areas, one with individual seats arranged like a restaurant, with facing banquets around tables along with table-less seating areas, and a large counter for the attendants. It looks something like the cruise ship interiors you might have seen in movies. Further inside, there is a family area where there are couple and family seats that face a television playing Hollywood movies. The third area of this ship is home to the business class lounge where the comfortable seats are reminiscent of the business class section of an airplane. Passengers can also go out on deck to enjoy the views and feel the swift ocean breeze.

The journey is comfortable and you aren’t disturbed or interrupted much aside from meal time when lunch is served.