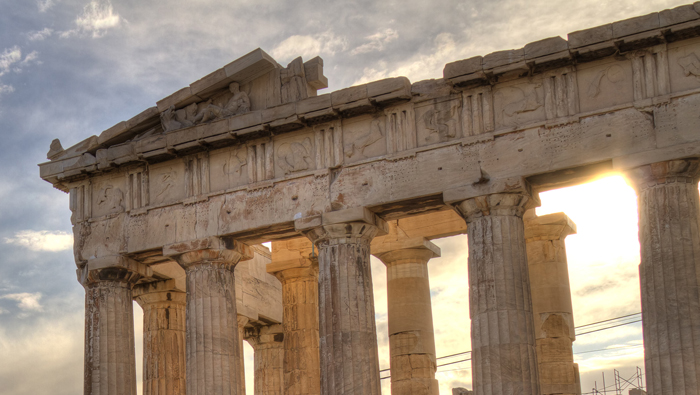 Much of what we know about the ancient Greek world has been learned from their pottery, which was often decorated with abstract and everyday scenes. The ruins of their majestic temples and cities have also helped us understand this rich and influential ancient culture. Greek sculpture often celebrated the human figure, and its Classical style has been copied by the ancient Romans and Western civilisations to this day.
Sculpture
Greek sculptures were vulnerable to time; stone statues broke, and metal was often melted for reuse. Early Greek statues depicting people were stiff and awkward-looking, but over time, they took on the realistic and natural feel of the Classical period. Originally, Greek marble sculptures were brightly painted and displayed against a solid blue or red background. The original Greek statue of Discobolus, “Discus Thrower,” has been lost, but there are Roman copies. Myron, the sculptor, was one of the best sculptors of Athens in the 5th century B.C.
Frescos
A fresco is a kind of mural painting where pigments are applied to wet plaster. The quick drying time of the plaster required the ancient artists to work quickly, which produced graceful, flowing brush strokes. Saffron, iron ore and indigo were some of the pigments used in early Greek frescos.
The Erechtheion
According to legend, the Erechtheion sits where the deities Poseidon and Athena competed over who would be the patron of the city. Work began on this religious temple in 420 B.C. and was finished in 403 B.C. The southwest corner porch is supported by six giant female statues called caryatids.
Architectural styles
There are three ancient architectural styles, called orders. These orders had distinct proportions and details. —[email protected]