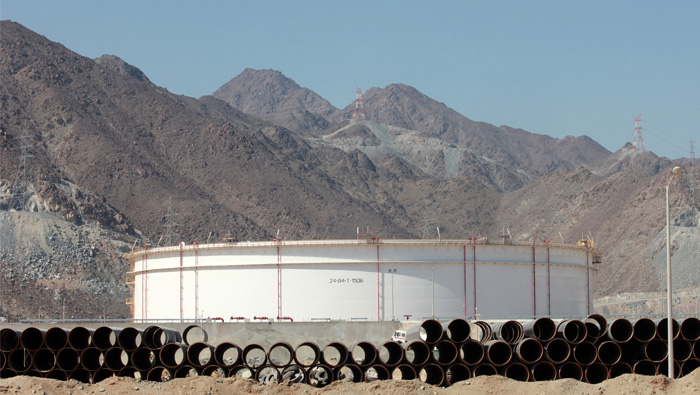 Dubai: Fujairah, a rocky ribbon of land between the Hajar Mountains and the Indian Ocean coast of the United Arab Emirates, plans to boost its influence as an oil-trading hub with the addition of the region’s first crude-shipment jetty and expanded storage facilities.
The emirate, one of the smallest of the UAE’s seven emirates, unloaded its first full crude cargo of about 2 million barrels at the jetty on Tuesday after opening the dock for testing early last month, Mousa Murad, the port’s general manager, said by phone. The jetty connects by pipeline to tanks leased by Royal Dutch Shell at a local storage terminal, he said.
Producers in the Middle East, the world’s biggest supplier of crude over the last half century, are expanding oil output as the Organisation of Petroleum Exporting Countries battles for market share amid a global supply glut. The region has traditionally shipped its oil straight to refineries in Asia, the United States or Europe. Allowing international companies to store crude may develop trading in the same way that Fujairah built its role as a refined-products hub.
“Adding crude storage and oil-loading capacity creates potential for greater volumes of business and gives traders more options,” Edward Bell, a commodities analyst at Dubai-based lender Emirates NBD PJSC, said in an interview Tuesday. “If tank space is readily available and there’s transparent data on inventory levels, that could have an influence on market prices for oil and products coming out of the region.”
Direct access
The UAE, Opec’s fourth-largest crude producer, has most of its oil in the largest emirate Abu Dhabi. Fujairah is the country’s only emirate fully outside the Strait of Hormuz, a shipping chokepoint at the entrance to the Gulf through which about a third of global oil shipments pass, according to the US Energy Information Administration. Its location on the Indian Ocean provides direct access to markets in Asia and Africa.
The tanker BW Peony sailed to Fujairah from Iraq’s Basrah oil port to unload on Tuesday, according to ship tracking data. The cargo marks the first full-sized delivery to the new jetty, Murad said. Shell, which produces oil in Iraq, declined to comment on its storage operations at Fujairah.
The jetty is the first on the Arabian Peninsula’s Indian Ocean coast to provide international companies and traders with an import and export link capable of handling some of the biggest crude tankers. The port plans to add a second jetty — also capable of serving very large crude carriers, which can transport about 2 million barrels of oil — and is in talks with other storage facilities in Fujairah to build more capacity, Murad said.
Adnoc exports
Abu Dhabi National Oil Company, the government-owned producer in the national capital, began exporting its own crude from a pipeline and loading terminal at Fujairah in 2012. That facility isn’t open to other producers or sellers and isn’t connected to the network of pipelines linking the rest of Fujairah’s tank farms to the main port.
Both the Adnoc terminal and facilities in neighbouring Oman export their crude via remote buoys that allow vessels to load oil at sea, rather than by mooring alongside a jetty.
Fujairah developed its storage and export capacity to take advantage of greater regional flows of fuels such as gasoline and diesel as Saudi Arabia and the UAE build new oil-processing plants. Fujairah’s storage capacity for oil products is set to rise to about 14 million cubic meters by the end of the decade from about 10 million cubic meters now, Murad said. That puts it among the top three oil-product trading ports along with Singapore and Rotterdam.